Community Resistance to the War on the Poor: The Online Course

In January 2016, John Clarke and A.J. Withers will be teaching the online course, “Community Resistance to the War on the Poor,” at the World Institute for Social Change, an experiment in online courses for the left sponsored by Znet.

The course will present an overview of a decades long history [Ed.: see Bullet No. 432] of organizing resistance in poor communities in Ontario to the mounting agenda of austerity. It will deal with the history of the organization and look at some of its key struggles and campaigns but it will seek to do so in a way the examines the factors driving the mounting attack on the poor in society. It will also explore, based on concrete examples, how poor people can organize to develop and assert political power in the difficult context of social abandonment. The war on the poor and resistance in the face of it will be linked to the development of the intensifying, post-2008 agenda of hyper-austerity and prospects for developing and expanding resistance in poor communities will be considered from the standpoint of how they can merge with and strengthen a broader movement of social resistance incorporating wider sections of the working-class population.

If you’re interested, you can view the online courses and sign up here: zcomm.org/zschool/moodle. This interview discusses the course, what participants will get out of it, and the differences between an online and in-person course.

Justin Podur (JP): Your course is called “Community Resistance to the War on the Poor.” Break the title down.

John Clarke (JC): Let’s start with the war on the poor. The war on the poor in one sense is an ongoing aspect of life under capitalism. A portion of the working-class is deemed to be ‘surplus’ and is supposed to suffer and is supposed to be an abject lesson to everybody else. That goes back to the very dawn of capitalism and the period in which the feudal peasantry were being thrown off their land. There’s always been the objective to come as close as possible to a state of outright abandonment when it comes to the poor, for there to be no level of social provision whatsoever. The only limiting factor is precisely the resistance of the poor, whether that be a natural level of social unrest, or whether it takes a more organized form. 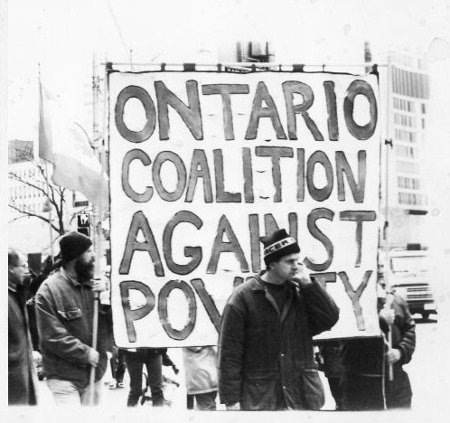 Of course the other determining factor is that capitalism has passed through different stages. It’s our misfortune today to be in a period where an agenda of austerity is driving the war on the poor. The agenda is to take back previous gains in the form of minimum wages, income supports, social housing, and so on. And so the resistance of the poor flows from that general and specific set of considerations.

JP: And the idea of “Community Resistance”?

A.J. Withers (AJW): I don’t think that everyone in OCAP [Ontario Coalition Against Poverty] would give the same answer, but for me it means working from the bottom up. Communities can mean, and for us, often mean neighbourhoods, in particular poor neighbourhoods. We’ve been deeply rooted in the downtown east, for OCAP’s history, but it can also mean identity-based communities, so, working with, marginalized groups, we’ve done lots of work with immigrants and refugees, indigenous communities, disabled folks. We are especially right now doing a lot around LGBTTQ issues. I think on the left people think about organizing as union-based organizing, workplace based organizing, and workplace based organizing leaves people out, especially the people without workplaces. Bringing together people in workplaces, those who have precarious work, and people who have no work, is important. A lot of working-class organizing has either erased or actually been combative toward those who aren’t working, for whatever reason. Community organizing is also very much about being democratic and having the people from those communities ultimately taking the lead in the kind of work that we’re doing and driving the demands, strategies and tactics.

JP: What do you think people could get out of an online course such as this?

JC: Today we are facing the need to fight back on a very wide front. We may resist in our communities, we may resist in our workplaces, we may fight around defending social programs, we may be trying to prevent them from cooking the planet, which is an immediate question. In the kind of common front of resistance that we’ve got to build, the organization of the poor as a distinct combative force within that front is of enormous importance. Anyone who is involved in any progressive struggle should want to pay significant attention to the building of a poor people’s movement, even if they’re not going to be directly involved in that project, because it’s such an important element in the overall resistance that we’ve got to build. There may be people who take this course, who are looking to be part of organizing the poor. Even if they’re not, this course offers some understanding of the resistance of the poor, and ideas of resistance that will be relevant more broadly.

AJW: OCAP has also been very influential, we’ve been studied a lot, people have tried to replicate the way we organize a lot, and a lot of times when people are writing about us or talking about us, there’s something lost. For us to be able to take the time to talk about the way that we organize and why we organize, and rather than for people to copy what we do, to try and get a more in-depth understanding about being creative, meeting the context that you’re in, and working with communities. We don’t talk about that, or teach each other about that, very often.

JP: What sorts of lessons will you be offering in this course?

AJW: We’re going to be talking about how to build a grassroots organization. We’re going to be looking at some of the history of poor people’s organizing in OCAP but also looking much more historically than that, to help people have both context and maybe a bit of a broader understanding about poor people’s movements. Both the war on the poor and the resistance.

We’ll also be talking a lot about OCAP’s particular organizing approaches, so there’s something that often gets called the ‘OCAP model’, which is doing mass mobilizing at the same time as doing what we call direct action casework, where we’re trying to meet very specific immediate individual needs. So for example if someone’s illegally denied their welfare cheque, we’d fight for that. We’ll be talking about that and the broader struggle of working within a system, making demands on that system, with the ultimate aims of fundamentally changing that system – or non-reformist reforms.

As well, I think part of the OCAP model is specifically organizing in neighbourhoods, organizing around the particular needs for survival of communities. And we’ll end off the course looking at state power and repression, and the linking of struggles, so one of the things that’s really significant about poor people’s organizing is that you’re necessarily also doing anti-racism, anti-colonial, anti-patriarchy, anti-disableism, anti-sexism, anti-heterosexism. We’ll speak more specifically to some of those connections and the need to make them move forward in the struggle.

JP: Of course doing this live would be better, but do you still see some value in doing an online course?

JC: Well, an online course is readily available. I don’t think anybody disagrees it would be better to meet in a living room and have a thoroughgoing discussion. But I think the ideas can be put across. The people who take this will be exposed to the thinking and many of the examples of what OCAP has done that will give them an acceptable working knowledge of what motivates us, what practices we’ve engaged in, and a place that OCAP plays within the broader struggle.

AJW: The thing that I’m also excited about is that we can reach people that can’t be here. There’s a London Coalition Against Poverty, an Edinburgh Coalition Against Poverty, people have created CAPs across North America. Being able to reach folks who are embedded in their own communities, I think is really useful. We have committed to making the material accessible. The readings are accessible, there is a lot of video [Ed.: see LeftStreamed No. 32, No. 40, No. 49] and audio, and of course video lectures, that you can access from anywhere. •

To sign up for this course, or other courses, please go to: zcomm.org/zschool/moodle. The cost of the course is $50 full fee, $25 low income, and proceeds will go to OCAP’s organizing.