The university students have been furious, as their cry “Fees must fall!” rang out on campuses and sites of political power across this society. An historic victory over South African neoliberalism was just won through the most intense three-week burst of activist mobilization since liberation from apartheid in 1994. 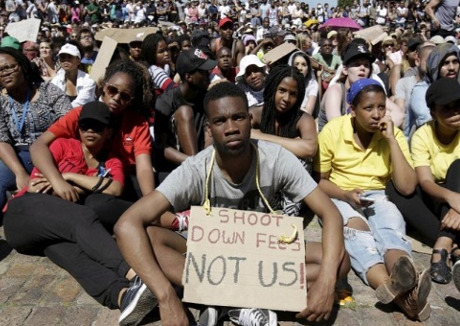 The liberation movement rulers in the African National Congress (ANC) have faced unprecedented socio-economic pressure and unrest. This is the most unequal of any major country, with a working class that the World Economic Forum last month judged to be the most militant on earth for the fourth straight year, and a deregulated corporate elite which enjoys the world’s third highest profits, yet which remains intent on looting the economy at a rate as fast as any. All these measures have amplified since the ANC took power in 1994. Suffering a 53 per cent official poverty rate, South Africa witnessed 2300 protests recorded by the police as ‘violent’ this year, a fifth more than last year.

The desperation flash point this month was the announcement of double-digit increases in university tuition fees. Students demonstrated not only against local managers at more than a dozen campuses. Their organizations united across the ideological spectrum, from socialist to nationalist to even the center-right student wing of the main opposition party, and hit national targets.

They began by storming the parliamentary precinct in Cape Town on October 21, then marched to the Johannesburg and Durban headquarters of the ANC on October 22 and 23, and finally demonstrated – tens of thousands strong – at President Jacob Zuma’s Union Buildings office in Pretoria on October 23.

There, restraining fences were torn down by some of the activists and tyres and latrines were burned, with police once again responding by using stun grenades, rubber bullets and water cannons. Refusing to come out to address the crowd, instead Zuma held a press conference where he unexpectedly conceded to the students’ main demand: no fee increase for next year (in spite of general price inflation around 5 per cent).

The Trajectory Through Race to Class

The current insurgency began late last month with sporadic acts of fury. At the University of KwaZulu-Natal in Durban, small groups of students burned an administration building and cars, and students were then caught bringing human excrement on campus, a tactic that was used successfully six months earlier to catalyse the dismantling of a hated statue at the University of Cape Town.

That was the #RhodesMustFall movement. Within a few weeks of a “poo protest” in which excrement was hurled at the prominent likeness of 19th century colonial mining lord Cecil Rhodes, thousands cheered when the statue was removed from the scenic campus. But their other demands for university transformation and “decolonization” – racial equity, a different campus culture, curriculum reform, more indigenous African professors (there are only five out of more than 250 senior faculty at Cape Town) – were unsuccessful.

After a breather, at UCT and Johannesburg’s University of the Witwatersrand (“Wits”), the country’s two traditional sites of ruling class reproduction, student protests revived this month. Of the dozen that erupted at tertiary institutions, these two were the best organized, most sustained and non-violent, mainly using the tactic of entrances blockages, then moving to the nearby arterial roads. Disciplined student leaders emphasized non-violent civil disobedience. Police brutality and occasional clashes with higher-income drivers who drove into the blockades did not deter the activists.

On October 21, inside parliament, the opposition Economic Freedom Fighters’ (EFF) support for their cause came before Finance Minister Nhlanhla Nene delivered his medium-term budget speech, which EFF leaders ardently tried to postpone, before being forcefully evicted. Outside, courageous students nearly broke their way into the main hall where Nene was holding forth.

But although there is still plenty of scope for fiscal expansiveness, Nene’s budget was heartless: no new money for universities (just condemnation of “unconstructive” student protests), and a tokenistic $0.75 (U.S.)/month rise in grant payments to the poorest pensioners and disabled people (who currently receive $105 (U.S.)/month). Although the latter is less than 1 per cent, Nene dishonestly claimed that this plus a prior tiny raise offered in February are “in line with long-term inflation.” (The inflation rate for poor people is much higher than the norm due to the far higher share of faster-inflating food, housing and electricity costs in their budgets.)

The influence of big business on Nene’s budget team is blatant: for example, the world’s largest mining house, BHP Billiton, still gets electricity at 1/10th the price of ordinary consumers, and persistent corporate tax evasion and illicit financial flows are now notorious. Another pro-corporate investment that will be looked at with increasing suspicion by society the more it becomes active, starting next year, is the BRICS bank, whose target capitalization (spread among five countries) is $100-billion (U.S.).

Whether seen through the eyes of students, workers, the poor, women and environmentalists, Nene’s budget was a recipe for intensified social struggle. Yet this was the first time since 1991, when Value Added Tax was imposed during apartheid at the behest of the International Monetary Fund, that a major spontaneous protest targeted the finance minister at such a sensitive moment. For Nene, the only objective appeared to be appeasing the banks’ credit ratings agencies.

As Reuters reported, Nene “downplayed the effect of university students storming parliament as he delivered his medium term budget on the credit rating of Africa’s most advanced economy. ‘What matters for the ratings agencies is our response as government in addressing these challenges,’ he said about the students’ demands to keep tuition fees unchanged.”

Government’s response was a combination of widely-condemned police brutality and ineffectual seduction by the ruling alliance’s left flank, especially the SA Communist Party whose leader Blade Nzimande is also Minister of Higher Education. He was shouted down by protesters outside parliament when he tried to explain why their demand was unrealistic and they would face a 6 per cent increase.

Nzimande’s 2013 Ministerial Committee for the Review of the Funding of Universities found “the amount of government funding is not sufficient to meet the needs of the public university system… Government should increase the funding for higher education, to be more in line with international levels of expenditure.” But Nzimande had refused to release a prior commissioned study favorable to the idea of free tertiary education.

A Boost to Anti-Austerity Activism

Students simply refused to accept Nzimande’s 6 per cent tuition rise, given that inflation is currently less than 5 per cent. So the march on Pretoria two days later – and threat of a full storming of Union Buildings – must have been the decisive factor in the state’s reversal. Although the cost of a deferring a tuition increase entirely will only be $150-million (U.S.), by making this concession Zuma has given encouragement to many more protests and Pretoria marches in future.

For those in the society watching and rooting for the students, this was a critical moment, perhaps ultimately as important as the breakthrough Treatment Action Campaign fight for free AIDS medicines fifteen years ago. For as Nene signalled, a more damaging period of austerity looms. South African GDP growth will be only 1.5 per cent this year and probably the same next year, lower than population growth. Thanks to Nene’s tight-fistedness, there will be a relatively small budget deficit (3.3 per cent of GDP), but financial commentators are full of threats about South Africa following Brazil’s recent downgrading to a junk-bond rating by Fitch, Standard&Poors and Moodys, the creditors’ cruel rating agencies.

The class war rages on. Other student demands remain outstanding: free tertiary education for poor and working people as the overall goal, and an end to labour casualization and outsourcing for low-paid university workers. Many such workers barely receive $100 (U.S.)/month, and with a poverty line of $60 (U.S.)/person/month, raising a family on starvation wages is impossible.

The task of retaining this visionary student-worker alliance in coming weeks and maintaining a national presence will be as difficult as is the multi-class ‘United Front’ organizing now underway. Difficult yes, but now, nothing seems impossible in this exceptional site of class struggle. •

The article first published on the teleSUR English website.