What should we call the current era? Post-everything? Or perhaps, the interregnum? Whatever the name it should be given, the current period is characterized by neoliberal trans-nationalization. In addition, U.S. hegemony has been under question since the beginning of this period. In fact, the Empire is no longer U.S.-American and a change in hegemony is in full swing. Despite what world-systems theorists such as Giovanni Arrighi suggest, the balance does not seem to be tipping toward China. Nevertheless, as Niall Ferguson points out, it is moving toward Chimerica. Furthermore, since the beginning of the global financial crisis, no project has been in sight that could reorganize the active consensus of the subalterns, move perspectives on accumulation one step up the ladder, and provide a position capable of establishing a new world order. 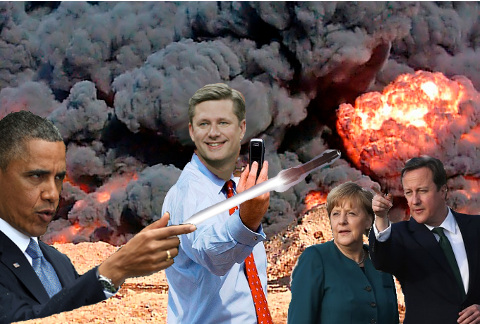 Attempts to secure neoliberal positions through authoritarianism are now facing a new transnational cycle of movements (Candeias 2013). Alongside numerous attempts by Islamist movements, the remaining great powers are sparring for spheres of influence, whether in Eastern Europe or through the appropriation of African resources. At the same time, the United States is endeavouring to prevent further losses of its room to manoeuvre; Russia is striving to expand its influence through energy and resource policies, and arms trafficking, whereas China has linked its imperial ambitions to the provision of foreign aid.

More than ever, the imperial way of life (Brand/Wissen 2012) is proving incredibly attractive, and this is particularly the case for the new middle classes of the Global South. However, resistance is forming – both on the left and the right of the political spectrum – and it ranges from indigenous movements in the Andes, to new democracy movements in Sao Paulo, Istanbul and Madrid, to the reactionary right in Venezuela and Thailand and rising Islamist forces in the Arab world.

This situation is reflected in attempts by the EU to enclose itself within a ‘ring of fire’, which it is promoting through hasty and clumsy forms of diplomacy such as EU policy on Ukraine. It seems that the strategic partnership with Russia has been forgotten; this need not bother the United States, however, since neither Russia nor the European periphery plays a significant role for the U.S. economy. This point is further illustrated by the U.S. ‘pivot to Asia’, which is leading the U.S. to develop long-term links (and competition with) the largest economic power centres in the world. At the same time, the privileged insular status of the U.S. means that it need not pay too much attention to good neighbourly relations, and this is particularly relevant because of the country’s successful moves toward energy self-sufficiency. In short: unlike Europe, the U.S. can at least partly “afford to act unilaterally” (Daniljuk 2015).

What Form of New World Order is This Leading To?

None, as yet. It is conceivable, however, that zones of uncertainty will form beyond the old and new capitalist centres. Direct (military) intervention to pacify and develop market-economic, liberal-democratic states has failed in Somalia, Bosnia, Afghanistan, Libya and Iraq. It seems we are already seeing the end of Francis Fukuyama’s “end of history.” The market has failed to produce order, and occupying the markets with ground troops is no longer an option. Limited operations and air attacks, however, and especially the use of drones, enable relative control to be exercised from a distance. Nevertheless, complete control over such zones of uncertainty is unnecessary as long as they remain enclosed. In worst-case scenarios, direct intervention can be undertaken under the guise of the “responsibility to protect” (for a critical review see Obenland 2015). This illustrates the point that the institutions of collective security (including the UN and the OSCE) have been marginalized.

The result is a form of ‘gated capitalism’: protected zones of global capitalism that guarantee the exploitation of resources, and free trade – even if no functioning community exists within the zones of uncertainty. However, this new strategy was borne out of necessity, and it is not running smoothly. States such as Syria and Iraq are disintegrating and this has led to the foundation of a new caliphate in the heart of the Middle East. Accordingly, control is being lost and we are facing a situation in which friends and foes rapidly change sides.

Disintegration is by no means restricted to the periphery. The EU states are still facing crises and are unable to stand on their feet. This situation is made worse by the fact that European democratic institutions are rapidly losing support. In Portugal, Spain and Greece, however, new left-wing forces are developing. Be this as it may, extreme right-wing and fascist national-populist movements and parties are gaining strength throughout Europe. This is not only the case with Eastern Europe, it is also occurring in the old centres: the Front National and UKIP constituted the largest parties in the European parliamentary elections in France and the UK respectively. Society is becoming increasingly polarized while disintegration continually marches on. In this situation, European societies need to ask themselves why thousands of young French and German Muslims can see no future in Europe and instead are joining the Islamist Jihad.

In the wake of the crisis, zones of uncertainty have long been established in the United States. The inner city of Detroit, for example, represents both a counterpart to the gated communities mentioned above and an expression of social polarization. Although public infrastructure is falling apart and inequality continues to rise, the focus remains on the top 0.1% (Piketty). Killing sprees are occurring regularly, and firearm fanatics, police and gangs continue the everyday violence. The system is partly responding to this situation with a privatized model of prisonfare – the management of the ‘underclasses’ in prisons (Wacquant). (Institutional) racism is now expressed in the open, as with the town of Ferguson, where the police shot an unarmed black youth. In the political field, polarization is worsening between the proto-fascist Tea Party and the liberal ‘Wall Street’ Democrats. At the same time, new left-wing forces are developing albeit mostly at the local level (Mogilyanskaya 2015). Despite this, controlling the zones of uncertainty and the budding forces on the left and right of the political spectrum is both impossible and unnecessary.

Controlling these zones and groups remains superfluous as long as they do not affect U.S.-American or European solid institutions of power (Porcaro 2013). This system is strengthened by a form of authoritarian constitutionalism that only passes with great difficulty as a “market-driven democracy” (Merkel). This is because growth and profit rates are continuously flattening out, but the current level of surplus value absorption is more than enough for the super-rich.

Global resource grabbing and free trade agreements are destroying local habitats and economies in the Global South and cause new flows of refugees that are then instrumentalized in right-wing propaganda. This is nowhere more evident than in EU policy in Africa. Free trade agreements are being concluded that enable competition from what are often highly subsided companies from the north to destroy smallholder production in the Global South. Of course, countries such as France intervene whenever destabilization goes too far, and they also secure the EU’s external borders against flows of refugees to avoid additionally ‘burdens’ on the dwindling social cohesion within the EU. However, this merely confirms an aspect that characterized the debate on globalization: traditional foreign policy is rarely ever conducted and it has been replaced with a form of global domestic policy, if not global crisis management. This illustrates the point that European foreign policy actually runs under the name of Frontex.

Left-wing ‘foreign policy’ should not be limited to security; rather it must also include social, economic and environmental aspects. How should we assess the current geo-economic changes? Which issues are currently gaining in strategic importance? Moreover, what might constitute an appropriate left-wing response?

Beyond clear positions against military intervention, left-wing foreign policy needs to develop a “policy of peace by peaceful means” (van Aken) that address the causes of conflict with just economic relations, social-ecological paths of development and the construction of social infrastructure. Specific entry projects that have begun to do so include the Yasuní Initiative, which proposed rejecting the exploitation of oil in the Ecuadorian jungle, while providing international compensation; or new institutions of economic cooperation, such as the Latin American ALBA agreement and the alternative development bank run by the BRIC countries. Even the implementation of an alternative trade mandate within the EU would represent a step toward fairer trade. However, one factor should not be forgotten, the Left needs to put an end to arms exports and implement just transitions for the conversion of former arms industries.

More often than not, however, the Left becomes entangled in false differences: one side argues that worsening conflicts demonstrate that there is no alternative to military intervention; the other argues against military intervention on principle. This debate generally leads to nothing but unilateral declarations of solidarity and abstract commitments, because peace policy measures are rarely ever developed. Only differentiated assessments of power (relations) can enable us to side with the subalterns, instead of merely with one side of the debate. How then can these issues be addressed while ensuring they remain coupled to discussions about a (demonstrably lacking) transformational perspective? Which international condensation points enable the development of exemplary, effective alternatives? More specifically, which strategies could provide civilian crisis prevention and conflict resolution? Moreover, where can the Left really make a difference? Calling for the repeal of the PKK ban, for example, which has long been anachronistic, would provide voice to an issue that is otherwise never heard. •