A mine explosion has just claimed the lives, as of the latest count, of almost 300 workers in Turkey. This event added another link to the long chain of massacres that has taken
place during the rule of the Adalet ve Kalkınma Partisi (Justice and Development Party, AKP) government. Leaving hundreds of workers dead and injured, the massacre has brought grief to the rest of the population, whose sharp anger was already directed toward the government.

The explosion took place in a mining site located in Soma town of Manisa, a city in western Turkey. Formerly a national, state-owned property, the mines were privatized in 2005 by the DG of Turkish Coa, with the operating rights of the mines transferred into a company called Soma Coal.

The AKP government has been a keen supporter of the private sector in the mining industry. In 2005, the government issued a new law, “Regulation on the Permissions for the Mining Activities,” which allowed the private companies to look for new underground mineral resources, pushing the mines into deeper and more dangerous areas.

Private Laws for the Private Sector

The AKP government swept off the last obstacles in front of the companies by amending the regulation further in June 2010, and opened the entire country to the corporate sector through a massive project of privatization. Thus between 2005 and 2010 approximately 45,000 mining licences have been distributed across the country.

In 2004, the AKP amended the Mining Law and introduced the new method of privatizing the mines without privatization. The “royalty” and “royalty tender” methods became a means to transfer the already existing but still state-owned mining sites to the private sector. In these cases, the state kept the property rights of the mines while the operating rights of the mines were tendered to the corporations.

Journalist Aykut Erdogdu from Birgün newspaper, claimed that some of the coal produced has been distributed to the poor people as part of a “social aid” campaign to strengthen the mass basis of AKP. The owner of the mine that devoured hundreds of workers in Turkey, The Soma Coal Company has been one of the corporations with ties to the AKP.

“The Business Style of the Private Sector”

Low-cost mining was the boast of the privatization of the mines. In his interview on 30th September 2012, Ali Gürkan, the owner of the Soma Coal Company, proudly talked about his solutions to decrease the costs: “The DG of Turkish Coal was producing the coal for $130 to $140 per ton. We got the tender and promised that we could produce it for $23.80 per ton, including the 15 per cent royalty share.” When asked about the magical formula his company used to
decrease the costs, he simply answered “the business style of the private sector came into play, that’s all.”

Indeed. But strangely, this decrease in the costs increased the death toll in the coal mines of the country. Not interested anymore with the necessary safety measures, the mining bosses managed to build some low-cost mass graves for the working classes in Turkey. It is very difficult to call these incidents as mere accidents. They are cold blooded massacres that come from the global civil war waged between labour and capital, and are a direct consequence of the cost-cutting and gutting of regulation and health and safety that were an inevitable outcome of the privatizations.

Mining disasters have become so common in Turkey that a literature of political scandal has developed around them. For example, on 17th of May, 2010 an explosion took place in Karadon Mines in Zonguldak city which claimed the lives of 30 workers. When their bodies were reached after 28 days, the Minister of Labour of AKP blithely said, “They died nicely.” He was trying to say that the workers were not burnt alive, but rather had simply suffocated. Prime Minister Erdogan said, in just as inflammatory way, that “The death is the destiny of the miners.” 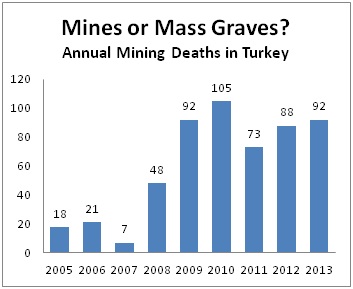 The recent miners’ deaths in Turkey should be considered as the product of the recent changes in the mining sector. This graph shows the yearly distribution of deaths in mining.

It was clear that a disaster the workers in the mines could occur at any time. Just 15 days before the explosion in Soma, on the 29th of April, the MPs of the opposition party submitted a parliamentary question to the government asking for an investigation regarding the mines of Soma and the increasing number of accidents at the site.

This question was dismissed by the AKP. Şamil Tayyar, a member of parliament from the AKP, appeared on TV the next day and accused the opposition party of “trying to block the agenda by submitting nonsensical parliamentary questions.”

Slander and lies have always been some of the favourite governing tools of the AKP, along with tear gas and water cannons. In the face of the crisis once again, it looks like the Party won’t give up using them. Burhan Kuzu, another member of parliament from AKP, for example, recently accused the internal enemies of a possible sabotage against the Soma mines and attacked against those who criticize AKP’s policies as “necrophiliacs.”

The AKP may be the same but the people have changed. If this massacre had taken place in 2012, one might have said, “nobody will care.” But since the June Gezi Park Uprising of last year, however, a significant section of Turkish society is ready to take action whatever the price.

Millions of people observed the funeral of Berkin Elvan, a young boy who was murdered by the police in Istanbul and the clashes with the police forces went late into the night. The same for this year’s May Day, in which thousands crowded the streets of Istanbul and fought to make their way to the historic Taksim Square.

Apart from killing hundreds of workers, the Soma explosion is also unveiling the fury and exhaustion that the working classes feel toward the AKP government. Various calls have been made by the unions and political organizations, inviting people to the streets.

Anger continued to spread across Turkey on Thursday. Many thousands of workers engaged in protests strikes, and clashed with security forces. Protests took place in Istanbul, Ankara, Izmir, Zonguldak and others. A common slogan is that “It’s not an accident, it’s murder.”

Now as the anniversary of the June Uprising draws closer, everybody hopes that the Soma Massacre would be the final chapter of the AKP period, and make way for a new democratic opening and the re-appearance of socialist politics in Turkey. •

Eren Buğlalılar is a translator and a PhD student in Ankara University, Faculty of Political Science and his studies are focused on the history of socialist movement in Turkey.