A European Perspective to Overcome Divisions in the Italian Left

The Italian left seems hopelessly divided and has practically disappeared as a parliamentary left in recent years – with the exception of Sinistra ecologia e libertà (SEL, Left-Ecology-Freedom), which, as a coalition partner of the centre-left government, has assumed responsibility for the neoliberal budget-cutting policies in the wake of the crisis. Hopes are being fueled now by the attempt to overcome our national problems of left fragmentation through an expressly European perspective: the establishment of a “Tsipras List against austerity” in the upcoming elections for the European Parliament. 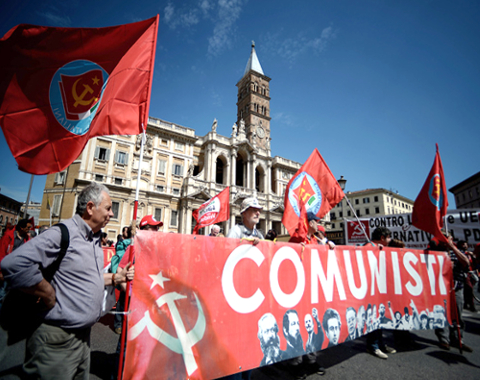 What is the background? Seven years of economic recession, a doubling of unemployment to a now official 13 per cent (but much higher in reality), youth unemployment over 40 per cent, the precariat increasingly more precarious, the rich increasingly richer, and a level of social inequality only found in a few other areas of Europe – this is the result of the implementation of a programme of social anti-reforms in Italy, which has further weakened the already fragile social state, with cuts in the pension system, the health system, education, and the municipalities. These are measures approved across party lines by the social democratic Partito Democratico (PD) and Berlusconi’s centre-right alliance.

It was predictable: these anti-reforms have not reduced the country’s high level of sovereign debt but have instead made it grow to 132 per cent of GDP. For years now, debt servicing is the biggest item of the state budget. Its growth is the consequence of the development of interest rates, the shrinking of GDP, and the lack of economic growth. And yet there is hardly any discussion in the public on alternatives to austerity and to the neoliberal model, or on sensible positions about the functioning and role of the EU, on the common currency, or on debt. The discussion still centres around Berlusconi as a person, who has now been condemned by the court of last appeal, and the reform of the electoral law. The dominant forces, which attack each other in talk shows, all give their blessings to the prescriptions of the European Central Bank (ECB) and the implementation of the policies which make budgetary cuts. They voted for the incorporation of the debt limit in the Constitution and for the notorious Fiscal Compact that condemns Italy and other southern European countries to ever steeper cuts whose only effect is to divert the burden of the crisis to the social sector, increase unemployment and make the already weak domestic demand shrink further and foster more years of economic downturn. As I write, the government is approving more privatizations, including that of the postal service.

Against this background it is no accident that Beppe Grillo‘s populism has achieved mass influence. His speeches against the political caste fall on fertile ground. A majority of Italians believe that by reducing the salaries of politicians and of public party financing (which have in fact been reduced a few months ago as the result of an initiative of Grillo’s), the main evil of the crisis can be dealt with. The increasingly anti-political mood, from Berlusconi to Grillo, is destroying democratic culture. This development is going in the direction of questionable first-past-the-post voting system laws, of parties continuously losing their character as political organizations and becoming dependent on charismatic leaders and polling results reflecting the ebbs and flows of public opinion. Italy is the European country that has moved nearest to U.S.-style media democracy. This picture includes the diminishing importance of other social organizations, such as critical journalism and trade unions. In contrast to Greece, Spain or Portugal, Italy’s unions were not able to react strongly to the crisis. There is little more than sporadic outbreaks of rage on the part of the population, which lack organizational and political
perspective. One cause of this is the elimination of a left alternative in parliament, of the only force that tried to put the social question at the centre of its political agenda. This short overview of the political situation should make clear what the background is against which the inner-left debate is being carried out in the run-up to the European elections. It is a debate which is being revitalized through the nomination of Alexis Tsipras as lead candidate (for the office of President of the European Commission) of the Party of the European Left (EL).

A number of intellectuals of diverse political shades, from the Marxist to the liberal left, have come together to call for the formation of an electoral alliance to support this candidacy in the name of the defence of the European idea, of a critique of the neoliberal austerity policies, and of the Fiscal Compact. Among them are famous intellectuals and artists such as Barbara Spinelli and Andrea Camilleri. It is a positive sign, even if the call itself is in danger of using the predominant anti-political culture by only calling on scholars, philosophers, artists and civil society in general, disassociates itself from parties – even from EL – and omits any mention of the social victims of the crisis. Nevertheless, the announcement by the EL of Tsipras’ nomination opens up possibilities for overcoming the divisions within the party-organized left as well as between intellectuals, civil society, and left parties.

Rifondazione Comunista immediately announced its readiness to build the broadest possible electoral alliance and a collective movement on the basis of the EL’s programme and support for the candidacy of Alexis Tsipras. It is now necessary to remove all impediments and avoid all pitfalls, and in a democratic process, starting with our base and an anchoring in the population, to include all those forces ready to back the political goals of a left list against austerity, whether they are organized forces or individuals, movements or initiatives – together with mutual respect. Tsipras’ name in itself symbolizes an outlook. Now the issue is to give the list a clear and definite orientation and content: anti-neoliberal, in struggle against the neoliberal policies of cuts, based on a critique of the EU’s undemocratic and authoritarian-technocratic power mechanisms and of its neoliberal foundations – an orientation critical of capitalism.

SEL, which would be an important potential partner of such an electoral alliance, is in a difficult situation in this regard. Some time ago the party decided in favour of a strategic alliance with the social-democratic PD and participation in its centre-left alliance. It has officially entered the acceptance process of becoming a member of the social-democratic Party of European Socialists (PES). However, it now has to face its rank and file which is not happy with the move to support Martin Schulz as lead candidate. And this is occurring against the background of painfully worsening poll results. SEL is carrying on a game of ambivalence and would like to occupy the space between Schulz and Tsipras. Concretely this means that in the EU Parliament they would vote for Tsipras but enter into the party of European social democrats and keep their relationship to the PD in Italy. However, there is no space between Tsipras and Schulz. Either one opposes austerity and the grand coalitions implementing it in Italy, Germany and Europe, or one supports them along with austerity. The dramatic nature of the crisis does not permit a tactical manoeuvre. The voters have little understanding for politicians’ games and see these as dishonest and cunning. It is still unclear whether a broad alliance can come about with SEL’s participation.

If it is credible, however, a left anti-austerity list could develop its own power of attraction and win back votes from the non-voters, from Grillo and from disillusioned PD voters. However, to do this it must put forward a clear alternative in the “spirit of cleavage” (“spirito di scissione”), as Antonio Gramsci once called it, for a different, a social-ecological Europe. •

Fabio Amato is a member of the National Secretariat of Rifondazione Comunista.