In the course of this past week, Unite Union has dealt with several cases of extreme exploitation of migrant workers. It seems that some of the liquor shops around Auckland have been employing students from India and paying a pittance – four or five dollars an hour, well below the legal minimum of $13.75 an hour. The students were working well in excess of the legal 20 hours a week allowed under their student visas. 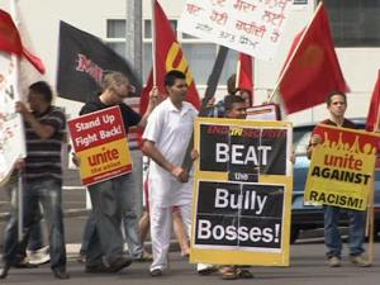 The students are trying to make ends meet. The employers, many of whom are of the same national background as the students they are hiring, are using all sorts of bullying and threats to keep the workers in line. Breaching their visas can be a reason for the students to be sent home, so it is difficult for them to use official channels to complain. Wage and time records are non-existent or falsified.

In one case, the employer had an ownership interest in a private training institution where their student employees were attending courses costing tens of thousands of dollars in fees.

A picket by Unite of one store in the franchised Super Liquor chain (print and video news report here) on December 20 got a quick response from the national brand owner to fix the problem and pay what was owed. We shall see.

It is often students from poorer backgrounds who get trapped into these situations. They are trying to alleviate the financial burden on their families created by the very high school fees. For those from India, their hope is that they can graduate from the course and then get a proper work visa for a few years. With luck, that might progress to permanent residence.

The government suddenly made that a lot harder earlier this year by removing many categories of jobs from those that qualify as being suitable for permanent residence. This includes the position of restaurant manager. This is a grossly unfair change of rules halfway through a match. The students feel terribly betrayed. We have heard case after case of students who had paid thousands of dollars to New Zealand education providers while at the same time working at a fast food company to try and obtain the training and promotion needed for a better shot at getting permanent residence. That money and the several years they invested in working have now been completely wasted.

The government has added to the confusion by announcing that it intends to massively expand the number of overseas students in the country. The goal is to double revenue from fees and spending on living costs from around $2.6-billion a year to $5-billion by 2025. One way the government is encouraging a rise in foreign students is by making it much easier for them to work part-time, while they study, and full-time during any vacation period. Students who are studying toward a PhD can work as much as they like.

There are over 90,000 overseas students currently in New Zealand. Around 20 per cent of those who arrive in the country on student visas have been able to progress to residency. The total number of temporary work visas issued annually has averaged 166,000 for the last 6 years.

The fast food industry has come to depend on migrant workers. Forty to fifty percent of all workers in the industry are on temporary visas – i.e., student visas or fixed-term work visas. Management in the industry is overwhelmingly migrant. The companies have used this
fact to squeeze wages for managers such that these have declined by 30-50 per cent in real terms over recent decades.

Organizing these workers has been a huge challenge. Union organizers sometimes express frustration about the perceived docility of Indian workers. One organizer called them “the philosophers” because the
standard reply to a five minute recruitment pitch was often a polite, “I’ll think about it,” meaning “No.” “I’ll have to consult with my partner/parent/manager” is another typical refusal. But the reality of the fear is often whispered – “If we join the union, they will cut our hours and not give us the training steps we need to get the promotion necessary to advance along the immigration ladder.” The fact that people with a work visa are usually tied to one particular company actually makes this a form of servitude.

A turning point came in the “Bitter King” battle with Burger King in 2012. When the union turned its organizing efforts elsewhere, Unite was attacked from behind by a sophisticated union-busting campaign. Area managers worked with store managers to target and deregister union members on a store-by-store basis. As surviving delegates organized resistance, Indian workers found their voice and came to the fore, detailing many instances of super exploitation. After a high profile media campaign where Indian workers talked about “slavery” at BK, the company sued for peace and migrant workers had their first taste of victory.
The union has now more members than ever in its history at BK. Indian and Fijian Indian workers are firmly in the leadership group.

Where we have completely broken that climate of fear, we have recruited these workers in the hundreds. In Restaurant Brands, which owns the brands KFC, Pizza Hut, Starbucks and Carl’s Jr, we have over 2000 members – over 50 per cent of the total staff number of these outlets.

In the McDonald’s negotiations this year, the majority of our bargaining team were migrant workers from India. We have dozens of delegates across the country who have come from India, China, Korea or the Philippines – to name just a few countries.

The withdrawal of the pathway to residency that the fast food industry had been offering meant that these workers now had nothing to lose by joining the union. The companies had used the carrot of possible future promotion to keep people in line and stop them joining the union, but with the carrot gone, our job has been made easier.

These companies now have a genuine crisis on their hand. The truth is they have been paying well below market rates for management staff because the workers were focused on future residency, not their current wage. It will be very hard for the companies to get anyone who is New Zealand-born or has permanent residence to run a 24-7 store with up to a hundred staff for around only $40,000.

Unite Union is trying to organize the managers in the fast food industry as well. At Restaurant Brands, we have a “protocol” to try and prevent the worst abuses, but will be looking at trying to get a collective agreement for managers in the future if we can’t get progress through peaceful dialogue. We actually have a higher union membership density among managers than we do for the overall workforce at KFC because there is a lower turnover among them compared to the non-managerial staff. And most managers who get promotions remain members of the union because they trust us to do the right thing.

The exposure of significant abuse of migrant workers last year prompted the government to tighten up on some laws designed to protect them. One change was to extend laws designed to protect workers not legally entitled to work to also apply to those who are. Employers with permanent residency who are convicted of exploitation can also be deported for up to ten years after gaining residency.

The government also told the Ministry of Business, Industry and Enterprise (MBIE) – to actively investigate and prosecute these cases. However, there are only 35 labour inspectors in the country with a workforce of 2.3 million. They are already swamped by their existing workloads enforcing minimum legal standards.

The massive expansion of student numbers in the years ahead will open up a whole new area for potential exploitation and abuse. One thing we must never do is give up on any
group of workers. We know from experience that as soon as they are confident, we can protect them. With protection, migrant workers will
find their voice and help lead the fight against exploitation of themselves and others. •

Leaders and members of Unite helped found the Mana Movement in 2011. It is a political party founded by leading activists of the Maori Indigenous people of New Zealand and union and other progressive social activists. The party’s founding principles are listed here.
In the 2011 election, the party gained 24,000 votes. Its leader, Hone Harawira, was elected to the national Parliament.

Mike Treen is national director of the Unite Union in Aotearoa/New Zealand and a member of the newly formed Mana Party.