Amid disputes between developed and developing countries, the United Nations Climate Change Conference (COP19) in Warsaw, Poland are set to conclude today [November 23, 2013] with little in the way of progress. Environmental groups and trade unions walked out of the conference on Thursday [November 21], just after developing nations had staged a dramatic exit of Wednesday morning’s session. 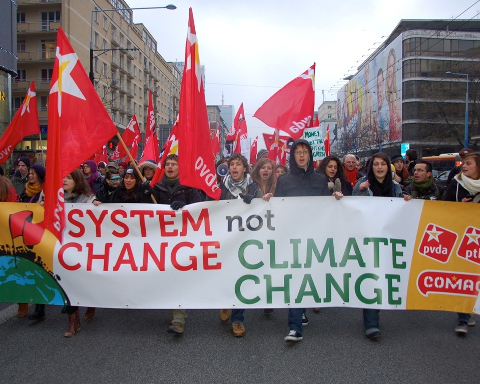 “Warsaw, which should have been an important step in the just transition to a sustainable future, is on track to deliver virtually nothing. We feel that governments have given up on the process,” said a spokesman for the World Widelife Fund.

The conference’s main goal had been to set a roadmap toward a 2015 agreement to replace the discredited Kyoto protocol. The 1997 agreement between developed countries had set out to reduce their greenhouse gas emissions to 5 per cent below 1990 levels. Instead, developed countries’ emissions increased, while global emissions have risen 58 per cent. Countries such as Canada and Russia reneged on their commitments, and the protocol was never ratified by the United States. To make matters worse, Japan announced prior to the Warsaw conference that it had no intention of meeting its targets, while Australia’s new conservative government sought to repeal its carbon tax.

A New Protocol After Kyoto?

Progress toward a new accord was hardly more promising, as the Warsaw talks became mired in disputes between developing and developed nations. The core points of contention centered around funding for climate mitigation, compensation for loss and damage, and differentiated responsibility for climate change. Developing countries urged for the creation of a $100-billion climate mitigation fund to fulfill commitments made in Copenhagen in 2009, but the United States made it clear that there would be little forthcoming. U.S. climate envoy Todd Stern stated:

“The fiscal reality of the United States and other developed countries is not going to allow it. This is not just a matter of the recent financial crisis. It is structural, based on the huge obligations we face from aging populations and other pressing needs for infrastructure, education, health care and the like. We must and will strive to keep increasing our climate finance, but it is important that all of us see the world as it is.”

A leaked memo similarly indicated that the United States had no plans to compensate developing countries for loss and damage incurred due to changing climate. Loss and damage discussions broke down when 133 developing nations walked out. This came less than two weeks after Typhoon Hayhan had devastated the Philippines, killing over 4000. The lead climate negotiator for the Philippines, Naderev Sano, fasted throughout the conference in protest of inaction.

With the breakdown in the talks it seems incredibly unlikely that the parties will settle on a path toward limiting temperature change to 2℃ above pre-industrial levels – a figure agreed upon at the 2010 conference. If emissions reduction is postponed until 2020, as planned, such a target would require rapid reductions on the order of 10 per cent per year, far beyond the political will that has been demonstrated.

The consequences of a global temperature increase significantly larger than 2℃ would be catastrophic, involving unprecedented heat waves, droughts, and major floods. Carbon dioxide levels would also lead to a drastic increase in ocean acidity, threatening coral reefs and thus endangering both coastlines and entire marine ecosystems. Increases in sea level, combined with increases in extreme weather events would pose an existential threat to many inhabited coastal and island regions. In fact, even the seemingly unreachable 2℃ scenario has been deemed by climatologist James Hansen a “prescription for disaster.”

While the climate talks were a failure for those interested in mitigating climate change, they were undoubtedly a success for the parties that aim to profit from it. The Warsaw talks featured unprecedented attendance from business and industry groups; the Polish government even went so far as to accept corporate partnership for the meeting. Partners included General Motors, BMW, PGE Polish Energy Group, and the French conglomerate Alstom Power, which claims to own “the industry’s most comprehensive portfolio of thermal technologies – coal, gas, oil and nuclear.”

As described in a report prepared by the Corporate Europe Observatory, these corporate partners have a history of lobbying to influence climate policy. Alstom has lobbied for “cleaner fossil fuels,” carbon capture technologies, and a carbon market – and they have been repeatedly convicted of bribing public officials. BMW and General Motors have lobbied intensely against higher emissions standards, while PGE Polish Energy Group’s vice-president is the president of EURACOAL, the European coal lobby.

Corporate lobbyists thus seek to set the terms of the next climate agreement after having thoroughly undermined the Kyoto protocol, from pressuring for lower commitments to lobbying for the inclusion of profitable emissions-trading schemes. The Warsaw talks were attended by dozens of industry groups, with the largest non-governmental delegation belonging to the International Emissions Trading Association – an alliance of big polluters and financial corporations.

In walking out of the conference the General Secretary of the International Trade Union Confederation, Sharran Burrow, stated: “The corporate dominance which is on show here is unacceptable. It is the same companies that advocate environmental and social responsibility that exploit workers and the environment through their supply chains.”

Hope for avoiding planetary catastrophe would thus seem to rest upon a conglomeration of corporations and corporate-sponsored governments working to realize a common interest in not undermining the very source of their wealth. Yet, while it may defy common sense, destruction of the biosphere is perfectly compatible with the underlying logic of capitalism.

In the early 19th century, James Maitland, the Earl of Lauderdale, noted a peculiar paradox of capitalism: private wealth could increase while public wealth diminished, due to formerly abundant materials becoming scarce. Abundant public goods have no exchange value to capital due to their plentitude, but as scarcity arises, the ecological economist Herman Daly pointed out:

“[w]e therefore observe an increase in private riches and perversely celebrate, while not noticing the decline in public wealth. Lauderdale’s paradox seems to be the price we pay for measuring wealth in terms of exchange value.”

This is the situation we are now facing, with corporations enriching themselves through the commodification of the growing scarcity of planetary resources. Corporations thus increasingly profit off of the environmental damage they have wrought; destruction of the commons justifies further accumulation of the commons. There are now calls to increase the privatization of the world’s oceans, while the world’s freshwater systems have already undergone significant privatization. As John Bellamy Foster has put it:

“We should not underestimate capitalism’s capacity to accumulate in the midst of the most blatant ecological destruction, to profit from environmental degradation (for example through the growth of the waste management industry), and to continue to destroy the earth to the point of no return – both for human society and for most of the world’s living species.”

As Foster explains, there is no feedback system that necessarily entails that environmental destruction will pose a problem for capital accumulation. Certain industries will be harmed by climate change, of course, but other industries will spring up to profit, as in the normal functioning of a system where “all that is solid melts into air.”

“We should not underestimate capitalism’s capacity to accumulate in the midst of the most blatant ecological destruction, to profit from environmental degradation, and to continue to destroy the earth to the point of no return.”

Capitalism is a system of boundless expansion that functions by commodification and accumulation. As Marx described in the Grundrisse, “capital is the endless and limitless drive to go beyond its limiting barrier. Every boundary is and has to be a barrier for it… a necessity which it constantly tries to violate and beyond which it constantly seeks to go.” These words carry new meaning in the age when several planetary boundaries have already been breached.

Corporations and corporate-sponsored governments thus cannot be expected to act to preserve the climate. The last two decades of failed climate talks should demonstrate as much. The sole hope for a solution to the threats facing the biosphere therefore lies in a transformation of society away from the dictates of exchange value – a reorientation of society’s values around use, rather than profit.

This is not to say that reforms to slow climate change are impossible under the current system. But in order for significant changes to occur the discussion about climate change needs to fundamentally shift to the systemic cause of the crisis: capitalism’s expansion. Such a discussion cannot be expected to emerge from a corporate-sponsored climate summit; it must be initiated by movements for climate justice and ecological socialism.

After exiting the Warsaw talks, Jamie Henn of 350.org concluded:

“I think that coming out of these meetings, there’s going to be a new type of commitment to really take on the fossil fuel industry – divestment campaigns, standing up to pipelines like Keystone XL. We’re beginning to figure out that to make progress on climate, we can’t just come to these conference and ask leaders for action; we really need to take on the industry itself.” •

This article first appeared at thenorthstar.info.