On October 7, President Evo Morales issued a government decree that allows workers to establish “social enterprises” in businesses that are bankrupt, winding up, or unjustifiably closed or abandoned. These enterprises, while private, will be operated by the workers and qualify for government assistance. 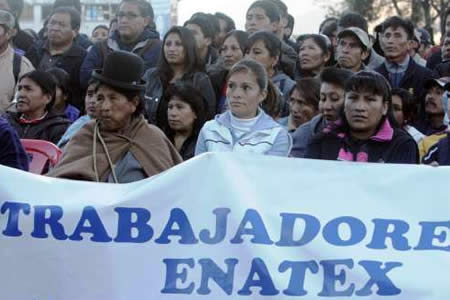 Morales issued Supreme Decree 1754 at a ceremony in the presidential palace marking the 62nd anniversary of the founding of the Confederación General de Trabajadores Fabriles de Bolivia (CGTFB – the General Confederation of Industrial Workers of Bolivia). The Minister of Labour, Daniel Santalla, said the decree was issued pursuant to article 54 of Bolivia’s new Constitution, which states that workers

“in defense of their workplaces and protection of the social interest may, in accordance with the law, reactivate and reorganize firms that are undergoing bankrupty, creditor proceedings or liquidation, or closed or abandoned without justification, and may form communitarian or social enterprises. The state will contribute to the action of the workers.”

In his remarks to the audience of several hundred union members and leaders, President Morales noted that employers often attempt to blackmail workers with threats to shut down when faced with demands for higher wages. “Now, if they threaten you in that way, the firm may as well go bankrupt or close, because you will become the owners. They will be new social enterprises,” he said.

Labour Minister Santalla noted that the constitutional article had already been used to establish some firms, such as Enatex, Instrabol, and Traboltex, and that more such firms could now be set up under the new decree.

Business spokesmen predictably warned that the new provisions would be a disincentive to private investment and risk the viability of companies.

Santalla also said that firms that do not comply with their workforce obligations under the law will lose preferential mechanisms to export their products to state-managed markets. And he cited some recent cases in which the government had intervened in defense of workers victimized for their attempts to form unions. In one such case last month, Burger King, the company was fined 30,000 Bolivianos ($4,300 U.S.), ordered to reinstate the fired workers and to recognize the union.

In the following article Alfredo Rada, Bolivia’s Deputy Minister of Coordination with the Social Movements, draws attention to some important developments within the country’s labour movement and suggests some means by which the unions can be more effectively incorporated within the “process of change” being championed by the government of the MAS-IPSP, the Movement for Socialism – Political Instrument for the Sovereignty of the Peoples. My translation from the Spanish. •

The Working Class and
the Political Process in Bolivia

Five months ago, I was in Tarija participating in a forum debating the political process in Bolivia, a process we call the Democratic and Cultural Revolution. One of those attending asked me whether it was possible to deepen this revolution, to make it an economic and social revolution, without the participation of the working-class. My immediate response was no, that to consolidate a period of transition to the construction of a new form of communitarian socialism it was absolutely necessary that the workers participate within the revolutionary social bloc that has managed this process of transformations starting in 2000 in the so-called water war, when the overthrow of neoliberalism began.

It was a very relevant question since at that moment, in May of 2013, the mobilizations over the Pensions Act called by the leadership of the Central Obrera Boliviana (COB – Bolivian Workers Central) in opposition to the government of Evo Morales were at their height.[1] Strongly influenced by ultraleft political tendencies organized around the self-described “Partido de los Trabajadores” [PT – Workers Party], the COB committed a monumental error in mobilizing their ranks with fevered speeches calling for replacing Evo with “another government,” as a leader of the urban teachers in Santa Cruz put it.

This maximalist orientation led the COB inexorably to defeat, since the strike and the mobilizations never met with popular support and in the end the union leadership had to retreat in virtual disarray. The diversion that led to the defeat originated in the characterization that the ultraleft makes of the present government as “bourgeois and pro-imperialist,” a simplistic deceit peculiar to the political currents of an excessively classist and workerist ideological mould that blocks them from understanding the varied nature of the Bolivian social formation, which can only be analyzed in terms that combine nation and class.

The present process of change is made up of a dynamic deployment of social class struggles within capitalism that are combined, sometimes in a contradictory way, with the historic struggle of the indigenous nations against the internal capitalism. That is the dialectical nature of this process, in which the anticapitalist and anticolonialist structural tendencies expressed in the political action of exploited classes and oppressed nations make possible the revolutionary transformation of the economic relations of exploitation, the political relations of exclusion and the cultural relations of oppression. Yet there is always the risk that this course of transformations, as a result of external pressures, internal fragmentation or programmatic concessions, will become exhausted or reversed.

Turning to the conflict with the COB, following its dénouement the government set itself the task of rapidly mending its relationship with the working-class sectors while at the same time the rank and file workers began to settle scores with the ultraleft leaderships within the unions. That is what has just occurred in the Sindicato Mixto de Trabajadores Mineros de Huanuni [Combined Union of the Mining Workers in Huanuni], an emblematic organization because that district, located in the western department of Oruro, has the largest proletarian concentration in the entire country. Its 4,500 miners more than a year ago had elected a union leadership radically opposed to the government. This leadership led in the May strike, the blockade of roads in Caihuasi and the blowing up of a bridge located in that locality. Today, weakened and isolated, that ultraleft that was perched for some time in the Huanuni union has ended up being removed by a mass general meeting of the workers, who also decided to approve the construction of a new political pacto de unidad [unity agreement] with the government of Evo Morales.

No doubt such repositioning within the workers’ movement will have a major impact on the future of the PT since that political instrument has now lost its backbone; the effects will also be felt in the orientation of the Federación Sindical de Trabajadores Mineros de Bolivia [Federation of Mining Workers of Bolivia] and in the COB itself.

Let’s look at another industrial sector, that of the construction workers. This is one of the fastest growing sources of employment owing to the expansion in public and private investment in new building construction. Everywhere in Bolivia’s cities you can see building and housing complexes under way, and with them the hiring of many workers as casual or piecework labour. But the unions in this sector are weak and dispersed, partly because their leadership tends to be controlled by the big construction companies but also because of the sparse regulation exercised by the state.

This submissiveness of the unions began to change at the most recent national congress of the Confederación Sindical de Trabajadores en Construcción de Bolivia [Bolivian Construction Workers Union Confederation], which met in the city of Santa Cruz. The construction workers elected a new union leadership and set their sights on the mandatory organizing of all the building workers, teachers and assistants, replacing oral agreements with the bosses with collective labour contracts in all construction projects. This will also be a means of overcoming the situation of “informal workers” that is one of the worst legacies of neoliberalism in a country in which less than 20 per cent of the workers are unionized.

Manufacturing workers have been one of the hardest-hit sectors, decimated by the massive layoffs euphemistically labelled “relocations” by Supreme Decree 21060 of August 1985. The manufacturing sector was subsequently subjected for almost two decades to the labour flexibility policies of neoliberalism in order to reduce payloads and increase the profits of capital.

Today the manufacturing sector is undergoing a rapid reorganizing of the unions that has helped to strengthen the Confederación General de Trabajadores Fabriles de Bolivia [General Confederation of Manufacturing Workers of Bolivia]. Yet to be consolidated is the organization of new unions, particularly in the cities of El Alto and Santa Cruz, the two major concentrations of industrial factories in Bolivia.

The importance given to reincorporating workers in the process of transformations around a common programmatic agenda with the Morales government lies not only in the fact that it will help to bring together a strong labour base of support, but also that it will strengthen the anti-imperialist and revolutionary tendencies in the process. The programmatic agenda to which we refer could address the following aspects: (1) a new General Labour Law which, while preserving the advances already in the present law, will grant new rights to the workers; (2) a natonal campaign of massive union organization in all industries that are unorganized; and (3) the strengthening of the social and communitarian sector of the economy, in alliance with the nationalized state sector. •

Alfredo Rada is Bolivia’s Deputy Minister of Coordination with the Social Movements. The original Spanish version of this article first published at Rebelión.

The conflict saw miners, teachers and health workers take to the streets of La Paz, while roadblocks and strikes took place across the country. Police were deployed to break up blockades in Cochabamba and La Paz, leading to several arrests and injuries, while workers at the state-run Huanuni mine joined the La Paz protests, paralysing tin production and costing several million dollars.

Other social sectors in Bolivia organized counter-marches in favour of the government. Representatives of the Confederación Sindical Única de Trabajadores Campesinos de Bolivia (CSUTCB), and the Confederación de Mujeres Campesinas y Originarias Bartolina Sisa marched in La Paz to reject the blockades and mobilisations organized by the COB, while coca workers also protested in favour of the government in Cochabamba. At a rally in La Paz, Morales strongly criticised the COB leaders, accusing them of being at the service of imperialism, capitalism and neoliberalism.

After 16 days of protest, COB leaders agreed to lift the strike for 30 days to allow time to analyse a government offer to reform the current pensions system. Union leaders negotiated for several days in La Paz with officials from the labour and finance ministries, during which the union lowered its demand on pensions to 4,900 bolivianos for miners and 3,700 bolivianos ($700 and $530 respectively) for other sectors. It remains to be seen whether permanent settlement can be reached. (Source: “Strikes and blockades organized by trade unions in pension protest,” Bolivia Information Forum, News Briefing May-June 2013)