Stefan Huth (SH): The national election is in full swing – how has it been going for Die Linke so far? Which issues are at the centre? 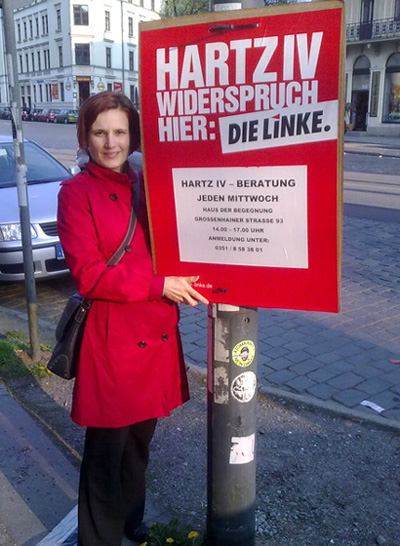 Katja Kipping (KK): We’re having really good experiences. It starts with our placards. You see a big difference between us, and the colourful mishmash of the other parties. The placards are striking and clear, but they also present very concrete demands, which you can pin us down on: a solidaristic minimum pension of 1050 euros; a 10 euro minimum wage; a guaranteed minimum income instead of Hartz-IV; a single-payer health care system; and a clear position against the war. There’s no beating around the bush, no abstract notions. Apart from that, the mood is generally good. We started 15 months ago in a difficult situation; we were at 5 per cent and below. In the opinion polls we’re holding steady at between 8 and 9 per cent, sometimes even at 10. We have established a party to the left of social democracy. The social impact of this achievement is not to be underrated.

SH: The media treats your party in the usual rude and hostile manner. Does it surprise you when the mainstream uses modes of thinking inherited from the Cold War to create animosity against Die Linke?

KK: The media should on the contrary be thankful there is Die Linke – and with it a force, which can still bring things to light that otherwise no one would talk about. It is often our inquiries and research that uncover important scandals that the media then gladly – sometimes even with the omission of our role – reports on. We are, so to speak, the whistleblowers of the Bundestag. We take on the powerful and are definitely not on the donations list of corporations and banks.

SH: Die Linke is perceived by many to be the only consistently anti-war party in parliament. What reactions is this getting in the election campaign?

KK: There are several points that set us apart from the consensual muck of the other parties; one of these is foreign policy. We are the only ones to have repeatedly and reliably said no to military interventions, as well as to weapons exports. It is precisely the situation in Syria that has shown how important this consistent position is. For years we have demanded that there be a halt to weapons exports to this region. To put it plainly: German arms manufacturers sold weapons to Saudi Arabia, from there they were taken to Syria, which then inflamed the bloody civil war.

SH: With regard to the war in Syria most parties are quite anxious to stay out of the current debate on the issue. Nevertheless it’s of enormous political relevance. A clear majority of Germans are against an attack by the West. Why isn’t Die Linke attempting to push the postponed, but still planned military strike on Syria, further into the centre of debate?

KK: For a start, we are the only ones who have a clear fundamental position on this question. The actions of the other parties are dominated by tactical considerations. We can see this clearly in the conduct of Peer Steinbrück (SPD-Social Democratic Party). He initially dilly-dallied; only after the British parliament voted against participating in a military strike did he likewise become critical. We didn’t speak out only now, as the USA threatens a military strike, about the conflict in Syria; rather from the beginning of the bloody civil war there we repeatedly demanded a halt to weapons exports and more money to help the refugees. Apart from that I can only say that we became quite active. We put forth several political proposals. Jan van Aken, a member of our campaign team, made repeated appearances in the media as an expert to answer questions. As a former UN weapons inspector he knows of what he speaks. We have also arranged with our local chapters that on day X, that is, on the day that the USA attacks, we will march on public squares at 6PM with the peace movement.

SH: Social issues and questions of war are of course inextricably linked. In a recently presented Ten-Point document, Die Linke formulated its minimum requirements for possible negotiations with the SPD and Greens. Both these parties have in the past pursued military interventions, i.e., Yugoslavia in 1999; and cutbacks to social services, i.e., Agenda 2010. What is the basis of your hope that a rethinking of these questions could set in with them?

KK: First, regarding the substance of this document. It states we have far-reaching goals, such as, that no seniors live in poverty by the end of the legislative term, and that we designate initial steps toward this end. We say it doesn’t matter whom we negotiate with on 23 September [election day]. We will bring pressure to bear in the first month to abolish temporary work, for minimum and equal pay for regular and irregular employment, plus extra pay for flexible working conditions. We want the elimination of the Hartz IV penalty system and a suspension of the invasive state monitoring that goes with it. These are motions we will confront parliament with, and that we will introduce.

And as concerns the SPD and the Greens, I think that before the election they also need to be concerned about transparency and tell their voters what it is they stand for. It makes me angry to see, for instance, how the SPD at its 150th anniversary celebration presented itself as the party of peace and used Iraq as an example. I think the rejection of the Iraq war by Gerhard Schröder was the only time that an SPD politician reacted negatively toward a military intervention. That no to the Iraq war was a solitary no in a sea of yeses by the SPD to foreign interventions. I think they should provide reasons as to why they reject cooperation with us, as for instance, because they plain and simple want to keep the door open to supporting military interventions.

SH: Germany is de facto already a warring party with the “Patriot” missile batteries in Turkey and its warships that are monitoring Syrian communications. The SPD and Greens have offered hardly any opposition to this; rather they share responsibility for these deployments.

“But there are red lines for us that we will not cross. We will not vote yes to military interventions and weapons exports, and we will not take part in social spending cuts or privatization.”

KK: The stationing of the “Patriots” was supported by four parties in parliament. I honestly had the impression that the Greens especially, voted for it with flags waving. They have a little bit of the converts’ problem. They originated of course in the peace movement, but then under Joschka Fischer’s leadership they decided to vote for military interventions after all, and they now justify them with particular fervour. It’s a change in colour from green to olive-green. I find this alarming and know there are many members in the SPD and Greens who have a serious problem with this direction taken by their leaderships. They would set their hopes on a “red-red-green” (SPD-Linke-Greens) coalition because they also hope that in this way their parties will once again become more concerned about social justice and peace. With regard to a coalition we would like to state clearly: It won’t fail because of us. But there are red lines for us that we will not cross. We will not vote yes to military interventions and weapons exports, and we will not take part in social spending cuts or privatization.

SH: SPD chief Sigmar Gabriel made an observation in July with a view to your party: A joint government would be possible on one condition, “If Die Linke were like the one in the East, then that wouldn’t be a problem.” How do you assess this split judgement about your party when you contemplate a possible common perspective?

KK: I find that quite hypocritical because the SPD had the possibility to work with Die Linke in the East in different states, in Saxony-Anhalt, in Mecklenburg-Vorpommern and in Thuringia. And it always failed because of the SPD, who always took refuge in a grand coalition with the CDU (Christian Democratic Union). The SPD leadership comes up with new excuses every time. Originally it was because of our past; then it was because of Oskar Lafontaine. Now Bernd Riexinger and I are at the head of the party. I was twelve years old at the time of reunification; Riexinger is a seasoned trade unionist who also belonged to the undogmatic Left in the West. They are constantly searching for new excuses, which I take in stride. A fight has already broken out in the SPD over who in the party should be made responsible after the election for the likely poor showing.

SH: Although Die Linke sets itself apart from the political competition with, for example, social issues and the peace question, according to the latest opinion polls it cannot really score with these. What in your opinion is the reason why it will be difficult to build on the result of the last election of almost twelve per cent?

KK: 2009 was an exceptional situation. The SPD was part of the government. As I said, I’m very happy about the work, which the new party executive has accomplished in the past 15 months. We have shown that with all the pluralism, there are good reasons why we are in the same party. •

More information about Katja’s campaign is available on her election website www.katja-kipping.de, and Die Linke.

This interview was conducted by Stefan Huth and appeared in Junge Welt on September 13, 2013. Translation by Sam Putinja.