For A European Antifascist Movement

The deepening and generalization of the crisis to nearly all European countries makes it now possible to comprehend not only the crisis’s dynamic and characteristics, but also the priority tasks which a Left that does not surrender and keeps resisting ought to take on. 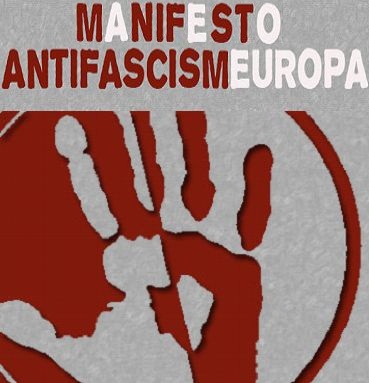 1. That is why we could henceforth evoke a trend toward the “Greecization” of, at least, the European south, insofar as countries such as Spain, Italy or even France, one after the other, find themselves confronted with a political scene that has been deeply and drastically changed, just like what has been going on in Greece for the last two to three years. To various extents, but in a clearer and clearer fashion, the pillar of their political system, say their traditionally prevailing two-party system, has entered a profound crisis (France, Spain) or more, is collapsing (Greece, Italy) in favour of often unheard of until those days political forces, belonging to both ends of the political scene. In no time, their two main (left and right) neoliberal parties, which had been keeping the power in turns – altogether, they used to gather 70 per cent, 80 per cent or even more of the votes, have now started to decline or even decompose. They are no longer granted more than 50 per cent, 40 per cent or even 30 per cent of the citizens’ preferences.

2. Even though the classical right has suffered too, the consequences of the alienation of citizens mainly impacted the social-democracy. Social democratic parties are collapsing everywhere in Europe (Greece, Spain, Italy and France) and – a sign of the times – they’re no longer capable of taking profit of the natural wearing out of the right when it’s in power. They strongly decline even when they are in the opposition!

In fact, we are witnessing an unprecedented crisis of social democracy which bears all the characteristics of a… terminal one! The consequence is historic and cataclysmic: having lost one of its two legs, the two-party system, which used to ensure political stability and the smooth running of a system based on the changeover of political power between the neoliberal parties, hangs in suspense and has stopped functioning. Under these circumstances, the regime crisis is not far away.

3. We have to acknowledge that the European Left is not in a state such as to embody the hopes of angry citizens who are deserting the parties that once used to prevail. Apart from Greece (Syriza), nowhere in Europe has the left got neither the credibility, nor the organized strength and social foothold, nor, above all, the capacity to inspire the masses that have been turning away from the main bourgeois parties while radicalizing their rejection of the established order.

The consequence of Europe’s Left powerlessness in facing the generalized crisis of the bourgeois domination system cannot be summed up to the prediction that the left will not take advantage of this cataclysmic crisis of capitalism. Alas! There is much worse to it. What is already looming on the horizon is that this historic crisis, along with the left’s current powerlessness, could all too well lead to whole sections of a confused and disorientated society turning, in the end, to the far right or even neo-fascist and neo-Nazi forces in an attempt to express their anti-system revolt!

4. Is this a mere working hypothesis? No, this is exactly what is happening in a continuously growing number of European countries. Now, it has nothing to do anymore with the “Greek exception” that has seen the hatching and stunning development of the neo-Nazi Golden Dawn. Now it is about a real far right tidal wave, or at least of the reactionary Euro skepticism (Germany, UK), even in North European countries so far relatively spared by the debt crisis and austerity policies!

Even more important than the quasi generalization of the phenomenon is the fact that the far right is now operating a historic breakthrough in such a great country as France, which has always marked our continent’s history. And even in countries where the far right remains marginalized (Italy, Spain, Belgium…), social crisis and political fragility are such that the situation might as well evolve in favour of the emergence of a far right force in no time, all the more taking into account the risk of contagion.

5. In fact, all the ingredients of an unprecedented since World War II political and social crisis are now put together in Europe so that we are getting closer and closer to the interwar period and its “devils,” even though the world has gone through tremendous changes since the 1930s.

However, similarities with the interwar period are not limited to the “objective” situation. Unfortunately, we see the “subjective factor,” the non social-democratic left, displaying the very same incapacity than the left in those days to understand what is going on in the deepest layers of society, and to react accordingly. The conclusion has to be categorical: it is not the rise of the far right – however impetuous it may be – that causes fear. What is frightening and determines today’s and tomorrow’s tasks is rather the incapacity or impossibility for the left not only to resolve the crisis to its own profit, but also to stand in the way of this rising reaction and far right!

6. Supposing that the diagnosis is right, what should we do, provided that, of course, we rule out any passive and fatalistic attitude and choose to fight before it’s too late? The answer seems obvious: we need to gather as quickly as possible all the available forces throughout Europe, Eastern, Western, Northern and Southern, in order to start a long term fight against the rising far right, including neo-fascism and neo-Nazism.

7. In order to make sense and above all to be able to bring tangible results, this European anti-fascist gathering must be altogether unitary and radical, massive and democratic. Any sectarian approach, dividing rather than uniting, reveals a deep misunderstanding or understating of the gravity of the situation, which requires the constitution of a unitary front gathering all those, without any exclusions, who are willing to fight the brown plague. The lessons of the interwar period, those of Italy of the 1920s and those of Germany of the 1920s and the 30s are here to remind us that the shortest way to suicide for the workers’ and socialist movement goes through its own sectarianisms and splits in front of the rising racist, fascist and Nazi far right.

8. In order to be able to inspire the anti-fascists and meet the people’s expectations in these times of prolonged social war, this anti-fascist gathering has to be unitary as well as radical. Here we have not only to ascertain that the fights against the people’s starvers and the far right are organically linked, since the far right supports – in ultimate analysis – the system and its economic foundations. Here we have to take into account the revolt, however confused and partial, of the victims of austerity policies against the system which generates them and the politicians who implement them. For it is the moderation of a certain left, perceived – understandably – as a kind of “softness” and a refusal to put into acts the left’s fine words that makes the impoverished and desperate masses turn to fascists and other right extremists nearly everywhere in Europe. 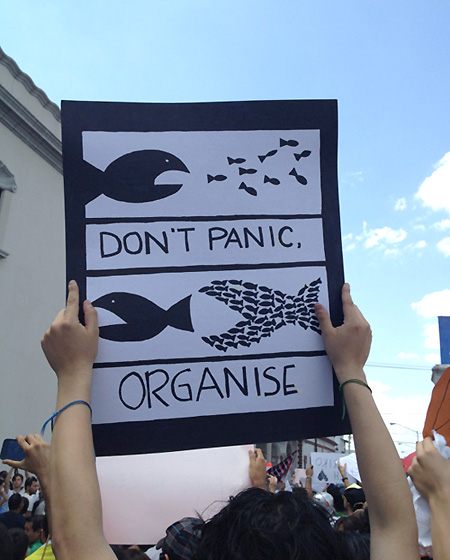 9. This unitary and radical European anti-fascist gathering must imperatively be democratic as well, based on the citizens’ self organization. Why? Because only mobilized citizens can fight and beat the far right and because the indispensable condition for their mobilization is that they themselves determine their fights, their goals and their forms of action. In other words, they have to take over their fate.

10. But there is more than this. If we want to fight with some chance of success against the far right, we have to do so everywhere, constantly and above all globally, on every ground, without ignoring any battlefield. Because it is not only about confronting the storm troops, the militia and other racist and neo-fascist gangs in the streets, but also facing the tremendous ravages caused in the minds and behaviors by the neoconservative counter revolution, the comeback of the worst racist, anti-Semitic, homophobic, anti-feminist and chauvinist reaction. And all this because the current rise of a mass far right does not fall out of the sky: it was prepared via the methodic poisoning of our societies by the selfish and anti-human “values” of the neoliberal, patriarchal and, finally, misanthropic and barbarous counter revolution.

11. In other words, nobody can claim to be anti-fascist as long as they are not in war against the pillars and the raison d’être of the far right, that is racism, homophobia, anti-Semitism, chauvinism, sexism, as well as the worship of blind violence, machismo and intolerance. A political or other organization cannot practice a consistent form of anti-fascism so long as it remains homophobic, jingoist, sexist, or even keeps making its militants goose-step parade.

So, who else than the directly concerned people – the citizens themselves – can give these everyday battles where they work, live, study, express themselves, build up relationships, love each other? The conclusion seems to be obvious: in order to be effective, anti-fascism must not be the apparatuses’ business. It has to be the business of self-organized citizens wherever they exercise their activities as social beings. An anti-fascism that would not attack all the aspects of the ongoing reactionary counter revolution and would restrict itself to fighting only its epiphenomena would be already doomed to powerlessness.

12. However, be careful: given the extreme emergency of an already critical situation, the true dilemma is no more “to act or not to act” against the growing far right threat, but to decide and act quickly, as quickly as possible, for too much time has already been wasted in Greece – as well as in Hungary and elsewhere. Therefore, it’s time to stop warning us saying that we must not let the brown serpent get out of its egg. Unfortunately, this warning is no more useful because the serpent not only has already left its egg long ago but it has become a monster parading in the streets and sowing terror at least in many European countries!

Consequently, let’s decide and act quickly! Being the result of an at least atypical initiative, the European Antifascist Manifesto has the great merit of existing and forcing us to face our responsibilities. Time is no longer for the indecisiveness of the ones neither for the fatalism and the passivity of the others. It is not as well for the sectarianism of those who do not want to understand that only united we could be credible enough to inspire the anti-fascist will of the large citizens’ masses. Now, it is time for anti-fascist unity and action, it is time for building the European anti-fascist movement. Today! Tomorrow could be too late… •

This article first appeared at www.cadtm.org).

Yorgos Mitralias is a founding member of the Greek Committee Against the Debt, which is affiliated to the international network of CADTM (www.cadtm.org)