A salient message from among numerous satirical dispatches from Iran resonated well with last week’s presidential elections. It said, “in other countries people go to the poll booths to elect their favourite candidate, in Iran we line up to vote in order to prevent a particular candidate from winning.” This indeed reflects Iranians’ attitude and reaction to an ‘engineered’ electoral process. 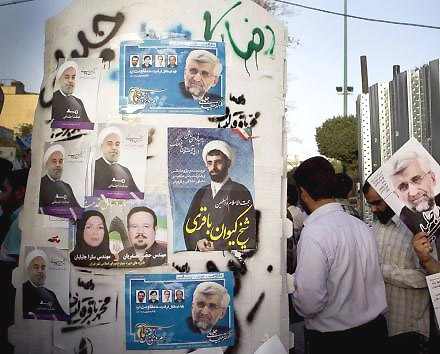 Reflecting on the people’s past voting strategies where people have to elect from the list of hand-picked candidates of the establishment, I wrote earlier that, “The key questions on the minds of the Iranians who want to vote strategically are: which candidate will be in a better position to possibly weaken the Supreme Leader? Which will be less detrimental in terms of economic mismanagement? And more importantly, which candidate will be less dangerous than the others in terms of brazen violations of human rights and civil liberties?”

No one had any doubt that the Supreme Leader’s choice was one from among the hardline Principlists subservient to him. But the Islamist reformists led by former President Mohammad Khatami withdrew their sole candidate (Mohammad Reza Aref) and along with the pragmatists, led by another former president Rafsanjani, put their weight behind Hassan Rowhani. During the presidential debates, Rowhani proffered a platform that included such burning demands of most Iranians as release of political prisoners, reducing tensions with the west, and addressing unemployment. Unexpectedly he gained the majority in the first round. The establishment could, as in previous elections have brought out someone else’s name from the ballot box. But the costs of the loss of credibility for the Supreme Leader after the 2009 presidential elections forced him to be more cautious this time.

Other reasons were at work as well. Both the regime and the public are wary of the future. The danger of war was very much in the minds of the voters, and those in charge of managing the elections. Sanctions have caused enormous problems as well. Hence, the public simply voted for the less dangerous candidate, Hassan Rowhani, who for the following reasons also triggered least concern for the establishment.

Firstly, Iran has multiple states, one is the regular one headed by the President, the other and the more powerful one is the beyt-e rahbar (office of the Supreme Leader) which duplicates the ministries, and decides on foreign affairs, the security and armed forces, and the state media. The third one is controlled by the Islamic Guards Corps, which is involved in all sectors of the economy. There is also the bonyads (religious foundations, and shrines) that control over 20 per cent of the Iranian economy. So the President has limited powers. In addition, the Majlis, the parliament, and the Judiciary, are also under full control of the Principlists.

Secondly, Rowhani is an establishment man. He has a most extensive resume among the Islamic Republic’s officials. He has been in all branches of the regime; as a member of the Assembly of Experts (that chooses the Leader), member of the Expediency Council (that has the final word on disputed issues between the Parliament and the Guardian Council). Also for 16 years he has been the Secretary of the National Security Council; was the Commander of the Air-defence System during the Iran-Iraq war; Deputy Commander of the Armed Forces, Chief of Staff of the most important and largest corporation of the Islamic Guards (involved in infrastructure, refinery; pipelines, dams, etc) a Member of Parliament for 20 years, and Chief nuclear negotiator under President Khatami.

The public (and not the voters mobilized by the regime to cast their vote for the chosen candidate) voted for Rowhani to prevent the continuation of the last eight years under Mahmoud Ahmadinejad, a period that without doubt constituted the darkest phase of the very dark post-revolutionary period of Iranian history.

Having lived under 34 years of Islamist rule, Iranian people harbour no illusions about the regime or even its reformers. They are well aware that Rowhani’s election would also alleviate the regime’s political, ideological, and economic crises and that a new ‘moderate’ face would prolong its life. However, in the absence of a viable progressive alternative, they just want to prevent the bad situation from getting worse.

The strategic voting, pointed to another unfortunate fact. That is the irrelevancy of opposition groups, particularly outside Iran – whether left, liberal, royalist or secular, or religious. All these groups, almost without exception, had called for the boycott of the elections. Had Iranian voters listened, a worse candidate would now have won the presidency.

The Iranian opposition is in disarray and divided. Some groups inspired by their Syrian, Iraqi, and Libyan equivalents, have formed “national councils” or “resistance” movements, or have organized conferences, all claiming to represent Iranian people with the hope of getting help from the western governments. Some along with the hawks in Israel, United States, Canada, and Europe, must be very unhappy about the outcome of the elections, as they now have considerably more difficulty in justifying more sanctions and preparing for a war on Iran.

For now, a “moderate” face in Iran, can ease the very difficult condition of life for people, provided the public keeps on pressuring for its demands, and for the opening up of the political space, which even on the most modest scale would revitalize civil society and allow the opposition groups to form a united front in order to replace the Islamic regime with a secular democratic system. •

Saeed Rahnema is a Professor of Political Science and Public Policy at York University, Toronto.