On December 9th 2011 the European Council announced a new Fiscal Compact, as part of the series of measures undertaken in order to resolve the Eurozone sovereign debt and banking crises. It was incorporated into the Treaty on Stability, Coordination and Governance (TSCG), signed by 25 EU governments in March 2012, subsequently ratified by the signatory national governments, and in force from January 2013.[1] The Compact includes a commitment by those governments to a cap of 0.5% on the ‘structural deficit’ implied by their annual revenue and expenditure plans. It also reinforces the existing Maastricht Treaty fiscal rules through an obligatory adjustment procedure, to be enforced by the European Court of Justice. 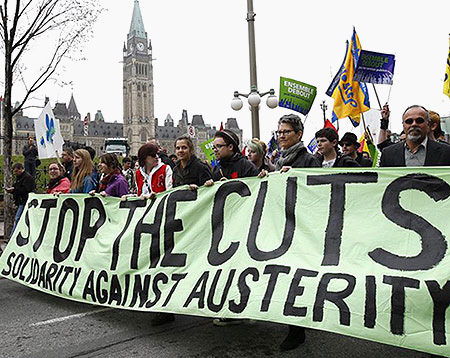 These proposals, when fully implemented, will not only enforce a permanent regime of fiscal austerity, but also further remove macroeconomic policy from democratic control. For these reasons they need to be vigorously fought right across Europe. But if readers in the UK imagine that they are not affected, since we are not in the Eurozone, they need to think again, for the structural deficit has also become the preferred fiscal target of Chancellor of the Exchequer George Osborne, backed by the Office of Budget Responsibility. While the most influential economic think tanks, the Institute for Fiscal Studies and the National Institute for Economic and Social research, have begun to challenge the Coalition’s austerity policies, they have not as yet repudiated the use of the structural deficit as a fiscal target. So what exactly is the structural deficit, and why is it such a danger?

The Economics of the Structural Deficit

In economic terms, the structural deficit measures how large the deficit would be if the economy were to return to its full potential level of output, with the prospect of thereafter growing at its ‘trend rate’ – the long-term rate experienced before the crisis. Because there is no way of directly calculating the structural element of the actual deficit recorded, it has to be estimated indirectly. This is done by working out the difference between actual output and its potential level, known as the ‘output gap,’ and then calculating how far the deficit would be reduced if the gap was filled as a result of economic recovery. This calculation in turn is based on estimates of how far the increase in output (and therefore also employment) would yield increases in tax revenues and reductions in public spending, notably on benefits. The remaining level of deficit then constitutes the structural deficit, which can only be reduced by further tax increases or spending cuts. In essence, the smaller is the output gap, the bigger the structural deficit, and the more austerity must be imposed.

However, measuring the output gap is itself still extremely difficult. There are three alternative approaches. The first method is to look at the historical record, to see how output has fluctuated across the cycle in the past, and then project this pattern on to the current cycle. This is unlikely to be reliable if, as most people think, the present recession reflects a very different pattern of economic behaviour than earlier cycles of the 1980s-2000s. The second method is to use the traditional method of mainstream economics, of measuring the amount of the ‘factors of production’ (capital, labour and land) available, and applying a ‘production function’ to estimate what output would be if all the factors were fully employed. Again, given that the production function is modelled on historical data, this seems unlikely to be much use in the present circumstances.

In the UK the Treasury, and since its formation the Office for Budget Responsibility (OBR), uses instead a third method, which combines whatever statistics might be available (for example, for areas of the economy where production capacity can easily be measured, like petrochemicals) with evidence from surveys of business opinion: firms are asked to estimate by how much they could increase output with their existing capacity. Based on such methods, the official UK story is that the crisis has permanently destroyed a substantial amount of productive capacity, while also leading to the widely-remarked decline in productivity; their estimate (in March 2012) for the 2012 output gap was only 2.5% of GDP. Given their estimates of the fiscal effects of output growth, this implies a structural deficit of 6.4% of GDP.[2] With no tax increases, that implies an eventual reduction in public spending of some £100-billion.

However, Bill Martin and Bob Rowthorn of Cambridge University have argued that the Treasury/OBR view is far too pessimistic about the output gap.[3] They find little evidence of complete closure of capacity, with sectors mostly just mothballing production lines, office space, etc. They also suggest many factors that have caused the fall in productivity, which has been widely seen as unexpected and inexplicable. They find that many businesses have been hoarding labour over the recession, which is less expensive than might be expected because of continuing high profits, falling real pay rates, and workers’ willingness to reduce hours of work. In addition, significant numbers of workers have been forced into sectors with much lower productivity, like retail and social case, or have taken up forms of self-employment that yield very little output and earnings.

All in all, Martin and Rowthorn estimate the true output gap at 9.5% of GDP (as against the OBR’s 2.5%), which gives a structural deficit of only 2.3% (as against 6.4%). Indeed, using the official method of estimation the structural deficit will typically change in a pro-cyclical manner: pessimism about short-term economic prospects will lead survey respondents to be pessimistic about their ability to increase output from existing capacity.

“Member States in Excessive Deficit Procedure shall submit to the Commission and the Council for endorsement, an economic partnership programme detailing the necessary structural reforms to ensure an effectively durable correction of excessive deficits. The implementation of the programme, and the yearly budgetary plans consistent with it, will be monitored by the Commission and the Council.”

The Politics of Depoliticization

What lies behind this extraordinary restriction to be placed on the democratic right of national parliaments to determine fiscal policy? In essence, it is the politics of depoliticization. European business and political élites want to avoid any return to ‘Keynesian’ active macroeconomic management, which they see as inherently liable to capture by popular interests. During the neoliberal era, they have therefore increasingly sought to insulate economic policy decisions from democratic control, by handing over monetary policy to independent central banks; subordinating spending departments to Treasury / Finance Ministry control; and imposing fiscal targets. This drive has been supported by a wide-ranging ideological offensive, centred on the supposed virtues of ‘efficient’ markets, supply-side competitiveness measures, flexible labour markets, tax cuts for the rich, privatization, and free movement across borders of trade and capital (but not labour).

In Britain, mainstream political scientists have framed these changes in the wider narrative of public choice between market and state as modes of economic regulation, on which distinct ‘varieties of capitalism’ have evolved. They assume that there is broad agreement on all sides as to society’s core values and goals, and that the choice of a given variety (with specified policy institutional and practices) is made on the basis of their effectiveness. ‘Depoliticization,’ in this narrative, is about a shift from state to market.

“Policy conflicts in a democracy will be fundamentally based on class: workers will press the state to redistribute income toward wages, while employers will fight to protect their profits.”

An alternative view can be found first in a legendary 1943 article by the Polish economist and contemporary of Keynes, Michal Kalecki.[5] He argues that with the available modern fiscal and monetary tools, policy conflicts in a democracy will be fundamentally based on class: workers will press the state to redistribute income toward wages, while employers will fight to protect their profits. For some Marxists, such as the British political scientist Peter Burnham, such conflicts over policy reflect the fundamental contradiction between political democracy and property rights: capitalism requires limitations on the scope of democratic action, in order to protect a prosperity that depends absolutely on the business decisions of a propertied ruling class.[6]

Ironically, support for this view comes also from the German ordoliberal school of political economy. Unlike Hayek (much better known in Britain because of his active presence here in debates with Keynes and his followers), ordoliberal thinking in Germany recognized that free-market capitalism was likely to produce a mass of workers who had no stake in capitalism as an economic system.[7] This ‘proletarianization’ would mean that, with good reason, workers would turn to the state to protect them from the vagaries of market competition and the business cycle. Their preferred solution, offered in the 1930s and 1940s, was that workers should as far as possible own their own houses, and have access to plots of land on which they could at least provide themselves with minimal subsistence.

In the ‘social market economy’ actually established in the Federal Republic after the war, security was to be effectuated instead partly by regulating business activity through fiscal policy, and partly by regulating labour markets, through national sector-wide collective bargaining, co-determination in larger enterprises, and tripartite planning of labour force training. However, the Hartz reforms of the 2000s have substantially weakened (‘flexibilized’) labour regulation, forced down real earnings and accelerated the rise in inequality.[8] This is only electorally feasible if the working classes (and their political leaders) can be persuaded that this is the only viable economic strategy in a dangerously competitive world economy.

The present German-led drive across the Eurozone toward permanent austerity and deregulation has been led by committed neoliberals, with the broad support of a business élite seduced by the wealth and life-style of their Anglo-American counterparts. The Eurozone Fiscal Compact is designed to enforce forever not only economic austerity through fiscal targeting of the structural deficit, but also a deepening ‘democratic deficit’ through removal of macroeconomic policy from parliamentary control. In the UK, we are marching down the same road. It is high time for the left across the whole European Union – and beyond – to chart a different road, one based on giving absolute priority to ending poverty, unemployment and insecurity, and on challenging the increasingly grotesque inequalities of wealth and power in the cause of social justice. •

1.
Treaty text available at “Treaty on Stability, Coordination and Governance in the Economic and Monetary Union.” The Fiscal Compact forms Title III of the Treaty.

6.
Peter Burnham,“New Labour and the politics of depoliticization,” British Journal of Politics and International Relations 3/2, 2001: 127-149.