Choosing Not to Look Away: Confronting Colonialism in Canada

Canada has “no history of colonialism.” So said Stephen Harper in 2009. Today the Idle No More movement is shouting down this lie through actions both creative and courageous. In its place, it is telling Canadians at large what some of us have always known: that the country we live in was founded as – and continues to be – a colonial-settler state.

Colonialism involves one society seeking to conquer another and then rule over it. European countries worked to conquer the Americas, Africa and most of Asia between the end of the 1400s and the 1800s. In the beginning, the goal was usually to gain access to resources – including gold, silver, furs and fish – that could give a boost to the feudal societies that existed in most of Europe at that time. 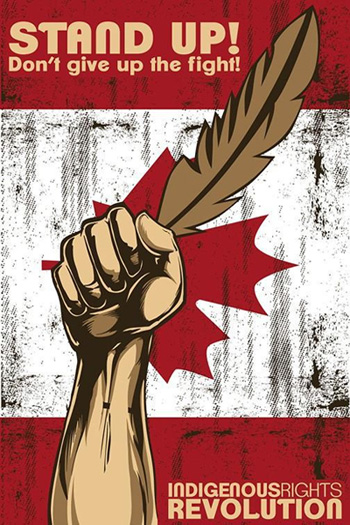 As capitalism developed, it spread a new way of organizing how goods and services were produced which focused on profit at all costs. The needs of humans and of the natural world with its land, air and water, were given little to no consideration under this new system. In a short amount of time Europe’s appetite for the natural resources found in the lands it would colonize grew enormously.

“Land. If you understand nothing else about the history of Indians in North America, you need to understand that the question that really matters is the question of land.” Thomas King (Cherokee), The Inconvenient Indian (2012)

Two main types of colonialism grew out of capitalism’s hunger for profit: colonialism based on exploitation of labour, and settler colonialism.

In most colonies, a small number of Europeans ruled over much larger Indigenous populations. In order to make profits from a colony, Europeans needed the labour of the people they had conquered. In these kinds of situations, the goal of the colonizers was to take wealth produced by the work of miners, farmers and, as time went on, sometimes factory workers. One good example of this was the work that farmers in India in the 1800s did to grow cotton, which was then shipped to Britain to be processed in factories and sold at a large profit.

The Land Grab: Settler-Colonialism in Canada

Unlike the kind of colonialism experienced in places such as India, the main goal of settler colonialism was not to take advantage of the labour of Indigenous peoples. Instead, it was to displace Indigenous peoples from their lands, break and bury the cultures that grew out of relationships with those lands, and, ultimately, eliminate Indigenous societies so that settlers could establish themselves.

In Canada, the society that settlers established became capitalist and created an economy that continues to exploit people for their labour and the land for its many resources. Respect for life and the relationships between living beings and the natural world is not important to the capitalist Canadian colonial-settler state. Under this system the land is treated not as something that humans should live in a respectful relationship with, but simply as a resource to exploit (much like the owner of a company demanding workers produce as much wealth for him as possible).

Canadian colonial capitalism would not survive without access to Indigenous peoples’ lands. This was true in 1867 when Canada was founded, and it is still true today.

Choosing Not to Look Away

The amazing energy, organization and assertions of Indigenous sovereignty that have recently taken place within Canada have shone a light on the truth of how the country was founded and how it is still run. Every week there are new and more actions – flash mob round dances, railway blockades, consumer boycotts, hunger strikes – that are working to force non-Indigenous people to see the reality of the country they live in and the ways that it continues to disrespect and abuse the original keepers of the land and exploit the land itself.

Bright lights are often described as harsh, but illuminating truth is an act of respect. Since its founding 146 years ago, the Canadian state has walked arrogantly, cruelly and carelessly forward, refusing to look back, and working to make non-Indigenous people believe they shouldn’t either. The respect – even love – for the land and all of our relationships with it, and with each other, that has been expressed in recent weeks has challenged non-Indigenous people to take another look.

Each non-Indigenous person will have to choose what to do after all that looking. One important teaching offered by Indigenous cultures is that knowledge is most powerful when shared, that stories are meant for storytelling. Having learned more of the true story of the Canadian state, another duty of non-Indigenous people is to tell that story, to insist on it travelling through all our circles.

Asking “Where could the story go next?”

One of the many gifts that the Idle No More movement is giving to non-Indigenous people is the opportunity to look at this country, the way it treats the people living in it and the way it treats the land and water we all depend on for survival and to ask, “Where should we go from here, together?”

We could, for example, ask what would it take to uproot Canadian colonialism? In his book Wasáse, Taiaiake Alfred (Mohawk) argues that “the most basic changes in colonial states required to create a just relationship and to set the foundations for lasting peaceful coexistence” are “the return of unceded lands, reforms to state constitutions to reflect the principle of indigenous nationhood and to bring into effect a nation-to-nation relationship between indigenous peoples and Settler society, and restitution.”1

We agree. We also believe another question needs to be asked: who in the Canadian colonial-settler state would have the most to lose by giving up control over Indigenous lands? There is no doubt that the people who own and run corporations (the capitalist class) will fiercely oppose any strong movement demanding changes like the ones mentioned above.

We believe that as Indigenous peoples continue to assert their right to determine their own futures and the right to their lands, it will become more and more important for all of us to talk about the ways in which the struggles against colonialism and capitalism are connected.

In this moment, Indigenous peoples are loudly raising their voices to remind us about the need for respectful relationships between individuals, nations and, above all, with the land. Increasingly, they are demanding that we listen. But they are also asking us to join them – to look in their faces, dance holding their hands, and to stand with them as they stand for the land. For all of us. •

This article first appeared on New Socialist Webzine. Both authors acknowledge that they reside on Treaty One territory and the traditional lands of the Red River Métis.

A lot of good writing exists about the oppression of Indigenous peoples and their resistance to the colonialism of the Canadian state. Here are a few we recommend:

Monique Woroniak is a librarian who works, writes and does Indigenous solidarity work in Winnipeg.