A social and political rights movement of Indigenous people is rising across Canada and making international headlines. Protests by the ‘Idle No More’ movement began last month and continue to grow. 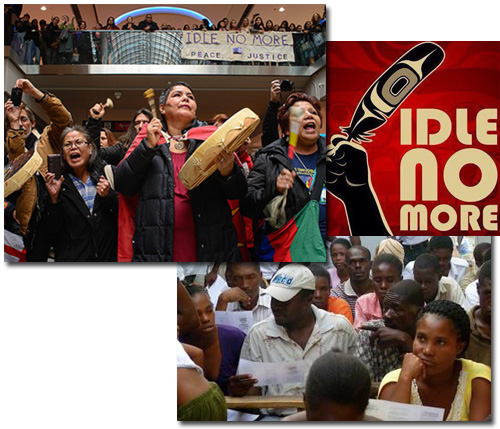 The movement has rallied daily across the country in shopping malls, at U.S. border crossings and on major railway lines. Three days ago, it compelled Canadian Prime Minister Stephen Harper to climb down from his refusal to meet with Indigenous leaders to discuss the very deep concerns of Indigenous people. He has agreed to meet a delegation on Friday, January 11. It remains to be seen if anything will issue from this gathering, but it is a significant political victory nonetheless. Protests will continue in the meantime, including an international day of solidarity action called for the day of the planned meeting. (See the Facebook event here.)

The social conditions and concerns that have given rise to this movement in Canada are strikingly similar to those in Haiti. In both cases, a long history of political interference, violations of national sovereignty and failed or harmful social policies are sparking firestorms of protest.

Two overriding concerns have sparked the Idle No More movement. One is the “omnibus” federal budget legislation, Bill C-45, that was approved by the Conservative Party-controlled Parliament and Senate last month.

Bill C-45 significantly amends laws in ways that further degrade sovereign and social rights of Indigenous peoples as well as the natural environment. The amended laws include the Fisheries Act, the Canadian Environmental Protection Act, the Navigable Waters Protection Act and the Canada Labour Code.

“Bill C-45 will not be enforced or recognized by First Nations,” declared a December 14 statement by the Chiefs of Ontario Political Confederacy. The statement echoes Indigenous opinion right across the country. The Confederacy includes the Nishnawbe Aski Nation, Anishinabek Nation, Grand Council Treaty No. 3, Association of Iroquois and Allied Indians and Independent First Nations. These sovereign bodies represent 250,000 people.

Ontario Regional Chief of the Assembly of First Nations, Stan Beardy, a signator of the statement, commented on the adoption of C-45 in saying, “The Canadian government just gave birth to a monster.”

Indigenous leaders are also sounding the alarm about a further wave of legislated changes that the federal government is pressing forward. These would deeply alter the funding and management of education and fundamentally degrade communal property laws and traditions on Indigenous territories.

The second spark to the Indigenous uprising is the calamitous social conditions on most Aboriginal territories. One community in northern Ontario, Attawapiskat, has come to symbolize the calamity. It blasted into national news headlines more that one year ago when its leaders declared a state of emergency over the chronic lack of housing, potable water, economic development and other social woes. Years of failure by the federal government to adequately fund social services in that community created conditions where some individuals and families were living year-round in tents or in construction trailers converted into single room dormitories.

One member of Parliament as well as national media undertook to report and publicize the deplorable conditions at Attawapiskat. The emergency declaration and resulting publicity galvanized similar, unresolved grievances right across the country.

Notwithstanding government promises one year ago to begin to address the concerns at Attawapiskat, next to nothing was done. So last month, Attawapiskat Chief Theresa Spence began a hunger strike in Ottawa that has made national and international headlines.

The key demand of her hunger strike has been that the federal government undertake meaningful discussion with Indigenous leaders to address longstanding and deepgoing concerns. She will be in attendance at the January 11 meeting but has warned there may not yet be enough pressure on the government to bring about meaningful policy changes, the problems are so widespread and long-standing. That’s why protests are continuing unabated.

For example, more than 2,000 people from north-central Manitoba are still living in makeshift housing in the city of Winnipeg, capital of Manitoba, almost two years after their communities were deliberately flooded in order to divert spring, snow melt water from the capital.

In a 2006 report, the International Housing Coalition cited estimates by the Assembly of First Nations that 80,000 housing units are needed in Canada’s 630 Indigenous communities. According to the 2001 Canadian census, 54 per cent of housing units on Indigenous territories were substandard. Many of those were a danger to human health.

According to the National Aboriginal Housing Association (NAHA), one in five non-reservation, Aboriginal households are in core need of housing, compared to one in eight in the general population. In 2006, Aboriginal people made up 0.5 per cent of the population of Toronto but 26 per cent of its homeless. In Edmonton in 2008, the corresponding figures were five per cent and 40 per cent.

Drinking water contamination and proper sanitation are also critical concerns in many Indigenous communities. In November 2011, CBC News reported on a federal government-commissioned assessment of water and sewer services on reserves that was released in April 2011. It looked at the water and sewer systems of 571 First Nations with 112,836 dwellings and a total population of 484,321. Thirty nine per cent of systems examined were deemed “high risk” to human health.

The parallels between Canada’s failure to adequately assist in housing its Indigenous population and the inadequacies and failings of its post-2010 earthquake aid to Haiti are striking. In Haiti, too, popular demands for a meaningful housing policy and for clean water and sanitation systems have been ignored and, as a result, protests are on the rise. Close to 400,000 Haitians are still living in harsh, displaced person tent camps with next to no services. Hundreds of thousands more have crammed into damaged buildings, into the homes of friends and relatives, or into informal shelter settlements, including very large settlements on the outskirts of Port au Prince.

In both circumstances, millions and billions of dollars are thrown at the problems and nothing seems to get done. Poor understanding of the plight of the victims and why the aid efforts fail, and the weakness or absence of advocacy on victims’ behalf opens space for prejudicial and racist interpretations of the problems to fester.

Racism is on the rise against the Idle No More movement as opponents of Indigenous rights and sovereignty strike back. Accusations of corruption, favoritism and incompetency against Indigenous communities and leaders are tossed about in ways that mislead and miseducate about the real sources of the policy failures in Indigenous communities.

Haiti received a dose of this treatment last Thursday from none other than Canada’s Minister of International Cooperation, Julian Fantino. Using his brief and only visit to Haiti last November as his prop, the minister blamed Haitians for their plight in an off-the-cuff, telephone interview with a journalist at the Montreal daily La Presse. The minister was newly appointed last year and has no international development experience.

Minister Fantino said Haitians can’t be bothered to organize themselves to clean up their cities and neighbourhoods. They can’t get a national government in place to get meaningful economic development going. They are simply looking for international handouts to solve their problems. “We [Canada] are not a charity foundation,” he said.

The minister used the interview to announce that Canada will freeze all new aid projects in Haiti. The Haitian government learned about the announcement through subsequent news reports.

In Haiti as in Canada’s Indigenous communities, much of the millions and billions of dollars that are said to have been directed toward needy recipients have in fact remained entirely in the control of the donors, be they foreign governments or outside aid agencies. The funds could not be misspent by the recipients because they were never in their hands in the first place. Furthermore in Haiti’s case, half of the funds that were raised or promised for earthquake aid and recovery have not been spent and are not committed to future projects.

The failings or absence of housing and other social policy in Haiti and in Aboriginal territories in Canada can be traced to the deliberate and systematic weakening of political sovereignty and democratic institutions of the affected peoples. The fight to regain that sovereignty is a growing struggle that links the fate of the peoples of the two countries and is a key to their survival and progress. •

Watch a one and a half minute video of the Idle No More march at the U.S.-Canada border at Cornwall, Ontario (Akwesasne) on January 5, 2013. Listen to an informative, 20-minute interview on CBC Radio on January 7 with Idle No More spokesperson Pam Palmateer and former vice-president of United Native Nations in British Columbia, Ernie Crey.