When Will We See Tanks in Barcelona?

“Independent Catalonia? Over my dead body and those of many other soldiers.” It was with these words that on August 31, retired infantry lieutenant-colonel Francisco Alaman Castro referred to the possibility of an independent Catalonia. And he added: “We will not make it easy. Although the lion seems to be sleeping, they have no interest in provoking it too much, because it has already given enough proof of its ferocity over the centuries. These plebs are not up to much, if we know how to confront them.” 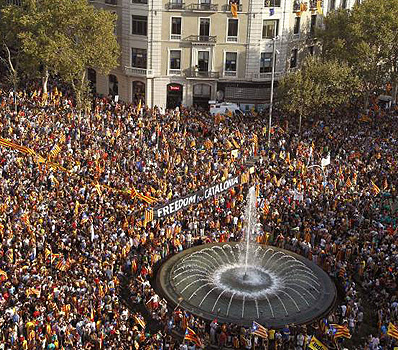 In the current verbiage that some politicians have adopted, these statements are not the only ones that we might call “undemocratic,” “putschist” and “anti-system.” After the demonstration on September 11,[1] the UPyD spokesperson[2], Rosa Díez, called on the government to suspend the autonomy of Catalonia if the region used money from central government aid “to finance its secession.” Not to be outdone, the MEP (representing the Popular Party, in power in Madrid) and vice-president of the European Parliament, Alejo Vidal Quadras, requested that a brigadier-general, preferably from the Civil Guard, take charge of the “Mossos de Esquadra”[3] to curb the independence process.

The El Mundo newspaper, in its editorial of September 27, demanded from the government “a penal response to the challenge launched by Artur Mas” who has called for a referendum on self-determination in Catalonia. El Mundo urged the government to amend the Criminal Code to “punish by imprisonment any call for an illegal referendum.” And for good measure, the extremist “Reconversion,” platform, whose leaders are Alejo Vidal Quadras and José Antonio Ortega Lara, demanded that if such a referendum were to be held the government place Catalonia under tutelage, on the basis of articles 161.2 and 155.1 and 2 of the Constitution.

Role of the Military

And that’s not all. The Spanish Military Association (AME), composed of former members of the army, has threatened Catalan president Artur Mas with a Council of War and has warned those who promote “the breaking-up of Spain” that they will have to answer before a military court on charges of “high treason”. Nothing more than that! It speaks volumes about the present situation when a conservative politician such as Artur Mas, enmeshed to the marrow of his bones with the powers of finance, especially with the La Caixa and Aberti banks, who is leader of a party as un-subversive as the CiU[4] elicits such reactions. What will happen then when it comes to someone on the left, who is opposed to the interests of the employers and is a sincere defender of the right to self-determination?

In the light of the above, I ask myself a question. If all of this was happening, for example, in a Latin American country, how would it be characterized? The BBC has published a long report that makes the link between the threats to Catalonia and the “pact of silence” introduced during the Transition.[5] And this is quite right. The Amnesty Law of 1977 guarantees immunity to those who committed crimes against humanity under the Franco regime and during the Civil War. These individuals are still there, and today they are raising their heads again, without any restraint.

At a time where the Hispanic Titanic is taking in water on all sides, with a crisis which worsens each day and scaffolding that is creaking everywhere, it is the true nature of the regime that is revealing itself. And so are the limits of a transition that has been so beatified that it has prevented people from seeing the reality for decades. All of a sudden, the mask of “democrat” has fallen from their faces. Crises have at least the advantage of clarifying things.

According to them, democracy is a good thing as long as it does not go beyond a certain framework. As a result, all those who disturb things, whether it is these “hooligan” Catalan independentists or these “dangerous” 25S activists, must be quickly silenced. Broadcast television images of police charges? What a scandal! People will become indignant and will demonstrate even more. Solution: limit the right to demonstrate and the right to be informed and the business is settled. The president of the Popular Party group in the European Parliament, Jaime Mayor Oreja, and the Delegate of the Madrid government Cristina Cifuentes have understood this well.

The current crisis is not only an economic and social crisis, but really an unprecedented regime crisis that calls into question the state model that came out of the Transition, its “pacts of silence” and the very shaky democratic system that we have today.

In the middle of this mess, we must support all democratic demands that come up against the monarchical corset of the Transition, starting with the right of the Catalan people to decide its own future. Who is afraid of such a referendum in Catalonia? Those who are not willing to accept its result. We should not, however, let the Spanish chauvinist fury against Mas make us take such a politician – whose only achievement in government is to have reduced social rights and taxes for the rich – for a herald of democracy and freedom. On the contrary, we, Catalans, will have a better life when we get rid of Mas, his squire Felip Puig and their team.

Infantry lieutenant-colonel Francisco Alaman Castro said that “the current situation resembles that of 1936.” That is quite a declaration of intent. Today, as then, our democracy, our rights and our future are threatened. What is at stake is important. When will we see tanks in the streets of Barcelona? It would not be the first time. But there is one thing I am sure of: the people will not remain silent. The most important thing will be not to make any mistake about who the enemy is, and while we fight against the badly recycled Francoists, we should remember that the interests of the majority of the Catalan people have very little to do with those of the Messiah Artur Mas. •

1.
On September 11, 2012, at the call of the Catalan National Assembly (ANC), constituted on March 10, 2012 in Barcelona by 269 Catalan municipalities, nearly two million people marched for the right to self-determination and independence.

2.
Unión Progreso y Democracia (Union, progress and democracy) is a political party of the radical populist Right, founded in 2007, which defends an uncompromising Spanish nationalism.

4.
Convergència i Unió (Convergence and Union) is a federation of centre-right Catalan political parties.

5.
Transitional period between the death of General Franco in 1975 and the adoption of the new Constitution establishing a “parliamentary monarchy” in 1978.