The massacre of the Marikana/Lonmin workers has inserted itself within South Africa’s national consciousness, not so much through the analysis, commentary and reporting in its wake. Instead, it has been the power of the visual images of police armed with awesome fire power gunning down these workers, together with images of bodies lying defeated and lifeless, that has aroused a national outcry and wave of condemnation. These images have also engendered international protest actions outside South African embassies. In themselves these images communicate a politics about ‘official state power.’ It is bereft of moral concern, de-humanized, brutal and at odds with international human rights standards; in these ways it is no different from apartheid era state sponsored violence and technologies of oppressive rule. Moreover, the images of police officers walking through the Marikana/Lonmin killing field, with a sense of professional accomplishment in its aftermath, starkly portrays a scary reality: the triumph of South Africa’s state in its brutal conquest of its enemies, its citizens.

At the same time, the pain and suffering of the gunned down workers has became the pain of a nation and the world; this has happened even without the ANC government declaring we must not apportion blame but mourn the dead. In a world steeped in possessive individualism and greed, the brutal Marikana/Lonmin massacre reminds us of a universal connection; our common humanity. However, while this modern human connection and sense of empathy is important, it is also superficial. This is brought home by a simple truth: the pain of the Marikana/Lonmin workers is only our pain in their martyrdom. They had to perish for all of us to realise how deep social injustice has become inscribed in the everyday lives of post-apartheid South Africa’s workers and the poor. The low wage, super exploitation model of South African mining, socially engineered during apartheid, is alive and well, and thriving. It is condoned by the post-apartheid state. This is the tragic irony of what we have become as the much vaunted ‘Rainbow nation.’

Moreover, the spectral presence of the Marikana/Lonmin massacre speaks to us about another shadow cast by the ‘Rainbow’ fairytale. It forces us to confront the hard edge of violence fluxing through our stressed social fabric. At one time, violent crime – car jackings, robberies, rapes, murders – defined our everyday understandings of violence. Our narration of these violent events constructed a sense of criminal violence as a major fault-line running through South African society. Such violence spreads fear, racial division and a sense of siege. It has been our undeclared civil war. However, the social geography of violence changes with the Marikana/Lonmin moment. A new faultline is revealed. Such a faultline has been in the making deep inside South African society through xenophobic attacks, violent police attacks on striking transport and municipal workers (over the past few years), violence against gays and lesbians especially in township communities, and police complicity in thwarting legitimate protest actions in poor communities and informal settlements. Through a failure to act decisively (in some instances like during xenophobic violence or by failing to provide policing in informal settlements) or through orchestrated violence the South African state is at war with the working-class within its borders; it is a ‘low intensity war.’ More specifically, such a war spans shootings, intimidation, failure to allow communities to lay charges, failure to investigate crimes perpetrated against poor communities, failure to be responsive to the safety needs of poor communities, fabrication and smear campaigns against local leaders, complicity with goons linked to local politicians (particularly the ANC) and a failure to act knowing that innocent lives are in danger.

A few examples of police orchestrated low intensity warfare working in cahoots with ANC goon squads or local politicians against communities illustrates this more clearly. This is based on testimony received from activists. First, after Abahlali Basemjondolo (Shack Dwellers movement) successfully challenged the Slums Act in the Constitutional Court, ensuring community participation to determine whether there can be relocation from an established community they became the target of police-ANC violence. In early 2010 an ANC goon squad violently removes Abahlali from Kennedy Road informal settlement. This is also captured in a documentary entitled Dear Mandela. The police carry out arrests of Abahlali leadership on trumped up charges and public violence which are eventually kicked out of court. Abahlali is not able to return to Kennedy Road informal settlement. 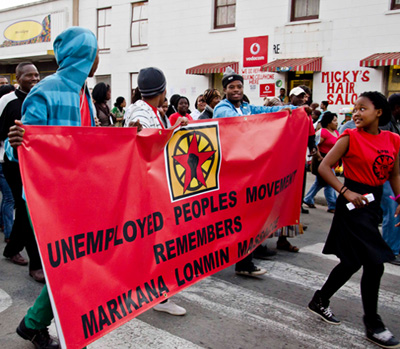 Second, a more recent example in Umlazi township Durban also shows this police-political party nexus working in insidious ways to suppress community demands. The local Unemployed Peoples Movement (UPM) and Ward 88 residents demanded a recall of their ANC councillor and a democratization of the ward committee. In their perception the ANC ward councillor was corrupt, failing to deliver and engaging in clientelistic control of development resources. This unleashed a series of reprisals. On 23 July the leader of the UPM was arrested under false charges. The complainants turned out to be incited by the councillor working in cahoots with the station commander at Umlazi police station. These charges could not stick but they held the leader of UPM for a day. It would seem these trumped up charges were meant to prevent him from leading a community meeting being held on the same day. This story has many twists and turns with the police-ANC apparatus constantly trying to intimidate the UPM and residents of Ward 88 in the course of this struggle.

What is striking about these examples is their challenge to mainstream academic and media explanations of community based violence as being merely reducible to intra-ANC battles. In all these instances a conscious awakening and challenge by communities and movements to the ANC state unleashes a low intensity destabilization of these community forces through the police-ANC state nexus.

Contrary to Zwelinzima Vavi, the General Secretary of COSATU, who believes South Africa is poised to experience the shock of a ‘ticking time bomb’ rooted in deep inequality and unemployment, this bomb is already exploding in various locales. However, the response of the ANC state has been about a recourse to low intensity violence. The Marikana/Lonmin massacre merely brings this trend into sharp relief. The challenge to COSATU is simple: does it want to remain a democratizing force, with a proud history, and take a stand with the wider working-class or does it want to be complicit in the low intensity war against the broader working-class and citizenry?

At a mass meeting on 22nd August at the University of Johannesburg the Marikana workers and community passionately appealed for solidarity. Such solidarity actions are congealing into but not limited to:

Marikana as a defining moment in post-apartheid politics is essentially about galvanizing the battle to reclaim South Africa’s democracy from below. It resonates with and expresses the desire of the majority to end the ugly reality of South Africa’s deep seated and racialized class based inequality that has been widening under ANC rule. •

This article first appeared on his blog defendingpopulardemocracy.blogspot.ca.