Auto Manufacturing Workers at a Crossroads

“The place is hot like hell, especially in the summer time at night, bad ventilation, a lot of humidity and of course machines emitting heat doesn’t help,” said Iain*, a temporary worker at an auto parts plant in the Toronto area.

“To top it off I work night shift so there’s the extra stress of not actually functioning like a normal human being. I work for what by most standards are fairly good starting wages but are drastically inferior to the wages of permanent workers. But I’m hardly the hardest done by of the employees that work there, a lot of them have families they never see because we’re given 6-7 days a week. Yes, overtime is paid, but it doesn’t give you much time to do anything else. Theoretically you could turn down the overtime but then you wouldn’t be working there for very long” 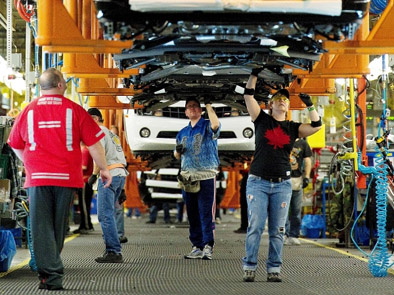 These are typical working conditions for auto parts plant workers in the inner suburbs of Toronto and nearby cities. For the first time since the 2008 economic crisis that nearly destroyed the automotive sector, the industry seems to be entering a period of sustained growth. Job opportunities are opening up again at the parts companies that supply GM, Ford, and Chrysler. The three major parts suppliers in Canada, Magna, Linamar, and Martinrea, have all seen slow yet steady growth. Yet, jobs at GM, Ford and Chrysler (the big three) in Ontario continue to decline as these companies persist in closing plants and laying off large numbers of workers to take advantage of the cheaper labour in the United States, particularly in states that have passed anti-union or so-called ‘right-to-work’ laws that make workers’ unions difficult to organize and maintain.

All of the permanent workers at the big three plants in Ontario are unionized with the Canadian Automotive Workers (CAW). However, the CAW has been unable to mount a successful fight against closures and layoffs at the big three and other employers, including some of the parts suppliers that they had unionized in the past. The remaining work is in the parts suppliers and the new hires entering these companies are mostly without any kind of union representation and have often shockingly bad working conditions and the lowest wages in the automotive sector. Some workers, like Ian, are forced to work too much overtime, others work unstable shifts and can’t get enough hours.

“The time I was at Linamar, there were two very serious safety incidents,” says Yelena*, a former employee in Guelph. “In the worst one, someone moved up the line to finish the work they had forgotten, and the component ended up falling 20 feet onto their shoulder.” She explains the reasons behind this kind of accident, “There is a lot of pressure with numbers and forced overtime on Saturdays if the numbers were not met, so people took the numbers very seriously, and it was also one of the hottest days of the summer.” Linamar also “stopped paying him after a week, so he had to go back to work…he also wasn’t getting the extra documentation he needed to see his specialist, and that they were taking a long time to get them to him.” Workers “would have to check off machinery as safe even if it had a problem, and would just have to call in maintenance and wait till they came to fix it while continuing to run.”

“There were also two deaths at Linamar couple of years back, one person was electrocuted and another was crushed, and there was another person electrocuted recently too, and he was in a coma last I heard.” Her uncle also works for the company and “his pay has gone down to $16 an hour from $26 an hour a few years ago and he’s been there 17 years. He’s getting older and older, and the work is getting more and more difficult for him, and he’s making less and less money.”

In London, Ontario, at a Caterpillar plant that was unionized with the CAW, the management locked out the workers when they wouldn’t agree to a 50% cut in their wages and then closed the plant so they could move production to Indiana, which has anti-union laws in place. While there was a massive movement against this closure by the workers themselves as well as workers from all over Ontario, who came to London on buses to support the struggle of the London workers against Caterpillar, the CAW was unable to save these workers’ jobs.

Herman Rosenfeld, a retired automotive worker and long-time member of CAW, is very critical of the CAW’s approach to the Caterpillar lockout. He believes that rather than just standing outside the plant and setting up a picket around it, they “needed to take it over, and the reason why they needed to take it over was that taking it over would have meant that they would have upped the anti, they would have raised the question of pressuring the government to take it over.” While they did win good severance packages for their members, many good blue collar jobs were lost in London due to the inability of CAW to, in Rosenfeld’s words, “actually challenge capital.”

It seems that across the board, whether unionized or not, auto workers are under attack. CAW is currently in negotiations with the big three automakers and just voted at their recent convention to merge with another big union, Canadian Energy and Paperworkers, to form a new union that will attempt to initiate a massive organizing drive to recruit more racialized workers and work in immigrant neighbourhoods, which they have traditionally failed to do. It seems that the union leadership has realized that auto workers in Ontario and industrial workers generally are at a historic make or break point.

Iain, the temp auto worker, believes “that it has to be an initiative that comes from the workers themselves, and that if there is actually the anger and the will to organize, nobody can stop them, but people can divert them and channel that energy into fruitless enterprises…and as far as unions having halls in immigrant neighborhoods, I don’t know of a single union that has a big presence there, but all of these temp agencies have a major presence in immigrant neighborhoods.” •

Marlon Berg is a writer for Basics News.