What Will Change in France?

In the traditional speech to the National Assembly, France’s Prime Minister Jean-Marc Ayrault of the ruling Socialist Party laid out the political program he shares with the new President François Hollande. Hollande won France’s presidential election with a victory in a runoff vote in May over despised conservative ex-President Nicolas Sarkozy. In June parliamentary elections, the Socialist Party and other center-left groupings won a majority of seats, which put Ayrault in the prime minister’s office.

According to Ayrault’s speech, the new government will quickly enact a number of measures, including plans to construct more than a half-million new public housing units each year – 150,000 of them reserved for low-income families – a 75 per cent income tax rate on the richest taxpayers, the right for same-sex couples to get married and adopt children, an increase in the minimum wage and the right to vote in municipal elections for documented immigrants who have resided in France more than five years. These reforms will be welcomed by working people in France – though, of course, we shouldn’t forget that they have yet to be implemented.

Ordinary people in France have been witnessing the erosion of their living standards and social gains for some decades now, but the attacks greatly escalated during Sarkozy’s reign as president. The message hammered through since the recession hit has been one of the dire need for austerity measures. 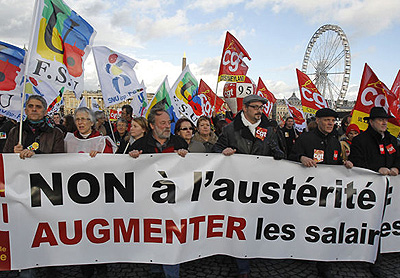 But despite the intense media propaganda, a significant portion of the population is squarely opposed to austerity. This was shown with the unexpected electoral surge of Jean-Luc Mélenchon in the presidential election. Mélenchon, a former leading figure in the Socialist Party, who left it in protest in 2008, won 11.1 per cent of the vote as the candidate of the Left Front, a coalition of several left reformist parties, including the Communist Party.

Campaign on the Left?

Mélenchon’s radical speeches and his hard stance against the fascist National Front won him a big turnout in the first round of the election. His presence pulled the entire political debate to the left, leading Hollande to talk about standing up to “world finance” and promise many of the reforms that were included in Ayrault’s speech. But the Socialists know they won’t have to worry about a challenge from the Left Front in parliament. Because of France’s undemocratic election laws, the Left Front won only 10 seats.

After the first round of the presidential vote, Mélenchon said he wouldn’t participate in a government led by the Socialist Party, which he harshly criticized during the campaign. What happens to the Left Front now remains to be seen, though it is important to remember that parties belonging to it, especially the Communist Party, have a long history of reformism, including cooperation with previous Socialist Party governments.

Rule on the Right?

Now that the Socialist Party is safely in office, Ayrault mostly dropped the radical rhetoric of the campaign and expounded a moderate pro-business agenda. In particular, he focused on an issue that has been central to the rise of the far right: immigration. “Irregular immigration will be firmly fought against,” Ayrault said. He promised not to send children or families to detention centers, but insisted that “deportations will be carried out within the rule of law.” This represents an immediate threat to the thousands of “sans-papiers” families residing in France, and it lends credibility to the false claim that immigration is a major problem.

In the public sector, the overall reduction in jobs will continue since Ayrault said the government would allow only 60,000 new hires during its five-year mandate, in education, police and the justice system combined. Ayrault didn’t call for end to the freeze on wage increases above the inflation rate for civil servants. Instead, he said that an economic plan for “growth, competition and employment” would be implemented through “give and take between the unions, the business community and the state.”

This isn’t a departure from capitalism, and not even from neoliberalism. The right-wing French philosopher Bernard-Henri Lévy was right to say in a New York Times article that if the leaders of the Socialist Party “were honest, they would change the name of the party.”

To reassure French and international capitalists, Ayrault preached “state budgetary responsibility,” while adamantly refusing to call this “austerity.” People who voted for the Socialists hope that the government will slow down the attacks, but the bosses’ austerity drive is still in motion. The new government will use the pressure of the ongoing economic crisis to extract more concessions from workers in the hope of restoring French capital’s international competitiveness – this is an economic priority for all center-left Socialist governments, this one included.

Ayrault invoked “economic patriotism” in his speech, begging French capital to produce in France and stop evading taxes. But in a symbol of what’s to come, the giant European aircraft maker Airbus announced plans to build a factory for assembling its new A320neo plane line in Alabama, a right-to-work state. This deal was touted by French media as an attempt to implant Airbus in the U.S. market in order to better compete with Boeing in U.S. Southern states. Of course, no mention was made of the fact that Airbus was relocating production outside Europe to take advantage of lower wage rates – nor that Airbus’ move will give Boeing more leverage over its workforce to push for concessions.

While the Socialist Party’s victories and the strong showing for Mélenchon represent a widespread rejection of right-wing former President Sarkozy and his right-wing agenda, the other major factor in France’s elections was the successes of Marine Le Pen and the National Front (FN, by its initials in France).

Le Pen won 17.9 per cent of the vote in the first round of the presidential elections, the fascists’ best-ever showing. The FN’s hopes of winning a number of seats in parliament due to the discrediting of Sarkozy’s mainstream conservative party were foiled, but the fascists do have two representatives, their first presence in the National Assembly in a decade.

Le Pen and the fascists were able to gain a hearing because of the depth of the economic crisis, winning votes even in working-class areas with a history of voting for the left with their scapegoating appeals. But the FN can only succeed because of the help it gets from the general climate of racism, xenophobia and Islamophobia that pervades the entire political spectrum in France.

In the campaign for the second round of the presidential election, Sarkozy made open overtures to win support from National Front voters, including vile attacks on immigrants, especially Muslim immigrants. But the conservatives aren’t the only mainstream parties guilty of pandering on themes that help the far right to thrive. The Socialists also vow to crack down on undocumented immigrants, and they have refused to call out the FN as the fascist organization it is.

The problem exists even on the left. Mélenchon’s harsh attacks on Le Pen during the presidential campaign – he called her a “filthy beast, spitting hatred” – were a breath of fresh air. But Mélenchon also contributed to the anti-Islam hysteria by supporting a law that banned Muslim women from wearing the veil. Even the far-left New Anti-Capitalist Party disgracefully refused in 2010 to endorse the local candidacy of its member Ilham Moussaid, a young student who defiantly wore the niqab. Such concessions to racism have contributed to the French left’s weak response to the FN.

Although the fascists’ surge in the elections is worrisome, historically, their influence has always fallen when large social movements are taking action. A case in point is the massive strike wave in 1995 against the conservative government’s attacks on workers. The FN lost its ability to send young recruiters into impoverished neighborhoods – it split in half two years later.

It’s quite possible that the honeymoon for the Socialist Party government will be short-lived. According to one leader of the Force Ouvrière (Workers Power) union: “Civil servants have been humiliated by Sarkozy. The ground is fertile for mobilization. We are ready for strike in autumn.”

Large mobilizations will be necessary to force Hollande’s government to acknowledge the demands of French workers against austerity, as well as to defend the right of immigrants and to combat the FN.

Fortunately, France and the rest of Europe have proven that such mobilizations are possible. In the fall of 2010, France was paralyzed by mass demonstrations and the biggest strike wave since the struggles of 1968 against Sarkozy’s proposal to raise the retirement age. Sarkozy got away with that measure, but the discontent expressed in the strikes set the stage for his election defeat this year.

In Greece, mass struggles in the streets and workplaces were turned into a political showdown with the ruling class when the Coalition of the Radical Left, known as SYRIZA, nearly won two successive elections on a platform of rejecting austerity and the rule of the bankers.

The French left should learn the lessons of Greece. The Socialist Party in France is the equivalent of PASOK in Greece, the center-left party that introduced drastic austerity measures as a condition of a European bailout of the banks. But do we have a French SYRIZA? •

This article first appeared at Socialist Worker Alan Maass contributed to this article.

François Laforge is an organizer with ULANJ and writes for Socialist Worker.