After the Durban climate talks

In 2007, former World Bank chief economist Nick Stern termed climate change the worst “market failure” in history – since those who pollute with greenhouse gases are not charged, and since they threaten future generations and vast swathes of natural life – and at that moment, even the 1991 ravings of another former World Bank chief economist, Larry Summers, made sense.

“I think the economic logic behind dumping a load of toxic waste in the lowest-wage country is impeccable and we should face up that,” according to a memo with Summers’ signature, although actually Summers was a mere plagiarist of Harvard economist Lant Pritchett’s genius, insiders allege.

It makes sense if you envisage every aspect of life to be a commodity, and if in turn you believe carbon trading is the right way to address climate change, through privatization of the air coordinated by financial markets (as do Stern and Summers). Indeed “payment for environmental services” is the mantra for neoliberal “green economy” advocates for the extravaganza Rio+20 Earth Summit in June, 2012.

Advocating a risky market fix to a massive market failure under circumstances of widespread market meltdown is the latest version of state failure. If, as expected, U.S. President Barack Obama nominates Summers to take over from the neo-conservative now holding the World Bank presidency, Robert Zoellick, then he may be committing one of the world’s worst-ever state failures. 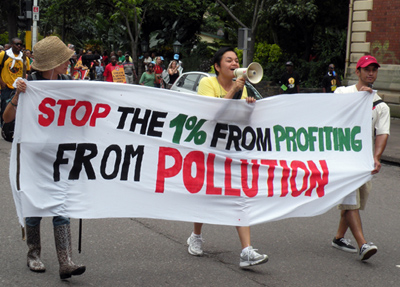 Scraping the Bottom of the Barrel

As in the case of French premier Nicolas Sarkozy nominating as International Monetary Fund director Christine Lagarde last May – when she was under investigation in Paris, where as finance minister she gifted taxpayer fortunes to an ally of her Conservative Party – this seems to be just another scrape at the bottom of the global governance barrel.

With Zoellick leaving, the search is also now on for World Bank leadership of the caliber of Dominique Strauss-Kahn – the former IMF managing director sunk in a New York civil lawsuit for rape and a Lille prostitution-ring investigation – and Paul Wolfowitz, the former World Bank president fired in 2007 for nepotism, though not for being architect of Washington’s oil-fueled 2003 invasion of Iraq.

South Africa has its own dubious candidate, former finance minister Trevor Manuel, who on one Irishman’s account has odds of 20-1, in sixth place, as against 4-11 for frontrunner Summers.

However, all this is trivia, mere personality politics. Dig deeper and you feel the enormous weight preserving status quo accumulation and class formation.

Instead, Zuma and Gordhan committed $40-billion (U.S.) to nuclear reactors from 2012-29 (with Gordhan neglecting to mention this very high-risk gamble in his speech), and at least double that amount in the next few years for coal-fired power plants, for transport infrastructure carrying fast-rising coal exports and for roads commercialization in the Johannesburg area. (Thanks to a popular revolt against e-tolling, this cannot be achieved on a user-pays basis.)

The state will also pay a soaring bill for extensive water degradation of ultra-polluted Limpopo and Mpumalanga provinces east of Johannesburg, thanks to an upstream “acid mine drainage” crisis caused by power utility Eskom and the multinational mining corporates.

How does this square with hosting the Durban COP17 climate summit in December 2011, here in Gordhan’s home town, which is also Zuma’s power base? Not very well, yet quite consistent with extremely degenerative processes in socio-ecological-economic neo-apartheid. Earlier this month, Yale and Columbia university researchers rated South Africa the fifth worst “environmental performer” among the 132 countries studied. The three categories where South Africa lags furthest are forest loss, sulfur dioxide emissions and carbon emissions.

Blame Pretoria’s finance, energy and mining officials; Johannesburg’s Eskom bosses; and the Melbourne- and London-headquartered mining and metals houses. These (mostly) men concur on vast electricity wastage for base-metals smelting, even though it results in the world’s lowest job per kWh rate and near-highest greenhouse gas emissions per unit of per capita economic output.

Such ecological and financial insanity continues because the crony-capitalist minerals-energy complex remains intact. Tragically, the most powerful force in forging apartheid’s migrant labour system was strengthened not weakened after the 1994 end of racial apartheid, even though the mining sector added zero contribution to the country’s GDP during the 2002-08 minerals boom.

One reason was mining’s contribution to corporate capital flight, which in 2007 – at the boom’s peak – reached an awe-inspiring 20 per cent of South Africa’s GDP, according to reliable Witwatersrand University economists.

To that waste and resource outflow must be added banal corruption, epitomized by Chancellor House (an African National Congress fundraizing arm) and Hitachi’s $5-billion deal for Eskom boilers which will apparently not be delivered on time, hence risking another round of brown-outs.

Behind that deal, South Africa’s public protector Lawrence Mushwana found in 2009, was Eskom chairperson Valli Moosa, who “acted improperly” because he awarded the price-busting contract in blatant conflict of interest, for simultaneously he served on the ANC’s finance committee.

That fact doesn’t bother the United Nations Framework Convention on Climate Change’s carbon trading desk, which at a Bonn meeting just offered Moosa chair of the “High-Level Panel on the Clean Development Mechanism Policy Dialogue.” The panel will almost certainly attempt to justify carbon trading, the privatization of the air, in spite of repeated European emissions-market episodes of fraud and corruption, not to mention a dramatic price crash.

Moosa also sits on the boards of Sun International hotels, Anglo Platinum, Sanlam insurance and Imperial Holdings transport and tourism – all major contributors to climate change. When as South Africa’s environment minister in 2002, he organized the World Summit on Sustainable Development in Johannesburg, next to no mention was made of the climate, aside from carbon trading advocacy. For good measure, Moosa also chairs the World Wide Fund (WWF) for Nature’s South Africa chapter, which promotes carbon trading.

In part thanks to WWF influence, South Africa recently suffered a sobering case of civil society failure. It was again on display last week when 100 chastened climate activists gathered in a desultory Durban hotel to provide each other with autopsy reports from the COP17 climate summit last December. Those most humbled (myself included, as a result of excessive pre-summit hype about our traditions of protest) worried that the country’s climate justice movement failed to demand accountability from the 1% negotiating elites inside the convention centre who were, to put it scientifically, plotting genocide and ecocide.

The harshest auto-critique of eco-activist impotence came from radical intellectual Ashwin Desai, author of We are the Poors. Desai attacked “big name spectacle NGOs” that dominated the main protest against the COP17 on December 3, 2011: “The local grassroots organizations were reduced to spectators, and were allowed only the occasional cameo appearance with most often a single line; ‘Amandla!’ [Power!]”

That march to the Durban Convention Centre, complained Desai,

“delivered the minister of international relations, and COP17 president Maita Nkoana-Mashabane to the masses gathered below. She used the opportunity to say how important civil society was and promised to study a memorandum. She was gracious and generous. I could see the NGOs on the truck preening themselves in the glow of this recognition and probably increased funding.”

But Desai would be the first to confess how few Durban community activists made the effort to link climate to their most immediate, burning concerns, including rampant electricity prices due to coal-fired powerplant construction; severe storms (one causing at least eight fatalities on November 27); and the local petrochemical industry’s regular explosions, such as the Engen oil refinery fire on October 10 that hospitalized 100 children at Settlers Primary School in South Durban.

For Desai, who assisted with mobilizing immediately afterwards,

“There’s a litmus test. In 2001 [at the World Conference Against Racism] there was a huge march here, with some 10,000 people in the streets, a completely different march: militant, scathing of the local ruling class, with swear words on its placards. The Durban Declaration was a visceral indictment of our ruling class as an agent of global capital and its economic policies which were deepening inequality and increasing poverty.”

Sadly, in the city’s most radical anti-corporate protest site, no matter how hard South Durban Community Environmental Alliance leaders tried to mobilize in the weeks preceding the COP17 (and I too am a lay member and resident), Africa’s industrial armpit could not consistently deliver more than a few hundred protesters from the 300,000 victims in the vicinity.

Is climate a hopeless issue to motivate the masses? From Cape Town’s Alternative Information and Development Centre, Thembeka Majali rebuts,

“People know what climate change is as they relate with that on their daily struggles and they know how to adapt to climate change – droughts, floods that are displacing people [who] migrate to other parts of the continent, unproductive agricultural land and fishing, etc. – but they understand that recently this became too much and that they need government intervention for their livelihoods and they now understand this is a threat to human life.”

But such demands consistently fall on deaf ears. Instead, for Desai, organizing against the COP17 had this depressing result: “civil society as meticulously controlled spectacle, reducing people to choreographed cheerleaders, acting as an accomplice to power.”

Activists who supported the unifying “C17” coalition of civil society had all manner of excuses for the weak showing, including erratic funders (always true, e.g. in the U.S.). Even huge NGOs (WWF and Greenpeace) apparently contributed only staff time but no other resources. These and other groups that served the C17 committee, such as faith communities and some trade unions, held competing events to the C17’s “People’s Space,” at locations across town, defeating the purpose of the civil society convergence.

Joked David le Page of the main religious-justice network, “I’m guessing the National Intelligence Agency doesn’t even bother to hire agents provocateur! I can see the report item: ‘Thanks to infighting in civil society this year, no agents were required for infiltration and disruption.’”

Yet infighting was, perhaps, logical, for it often felt like control freakery and intrinsic NGO conservatism overwhelmed C17 logistics (something I witnessed firsthand when attempting to secure space for the Rural Women’s Assembly). One radical cultural activist, Stephen Murphy, complained of continual emails offering assistance which went unanswered, so,

“I gave up even trying to get even the smallest tasks delegated, and turned my efforts to OccupyCOP17 and durbanclimatejustice.net – a site which, by the way, with no budget or mandate, managed over a thousand more hits than the C17 website, and if you include conferenceofpolluters.com and occupycop17.org, which I was also running, more than double. Why? Because we created the space for political positioning and comment, even if we weren’t ourselves making those comments.”

Murphy’s critique of C17 apoliticism was widely shared, given the coalition’s failure to take a justice-based stand against climate change. At its main mid-2011 summit in Durban, a list of 26 demands was submitted to forge an overall political manifesto – yet C17 facilitators somehow agreed that any member of the crowd could veto any single demand, leaving just four left over as the bland lowest common denominator.

To be sure, many justifiably praised six core members of the C17 committee for hard work (though the 11 others were AWOL). Still C17’s meagre impact – reflected not only in the negotiators’ failure to cut emissions but in our own failure to generate momentum for climate justice – doesn’t auger well for unity in future campaigns to save the climate and the South African economy from the minerals-energy complex and finance ministers.

In short, a sober accounting of the disastrous climate summit must also offer an autopsy of civil society counterpower, and hopefully, too, either a diagnosis for reviving that corpse or instead for rejecting contradiction-ridden “unity” of such breadth as to fuse carbon traders and eco-socialists … when really, they’re much better off engaged in constructive conflict. •

Bond’s books Politics of Climate Justice and Durban’s Climate Gamble were launched during the COP17.