Italy and Greece: Rule by the Bankers

It looks as though, by Monday, both Greece and Italy will be ruled by so-called ‘technocratic’ governments. Even though both Greek prime minister George Papandreou and Italian prime minister Silvio Berlusconi were elected comfortably in parliamentary polls and were never defeated in any vote of confidence in parliament, they have been ousted – to be replaced by unelected ex-central bankers and former executives of hedge funds and investment banks. From now on, financial markets will rule directly over the lives of the Italian and Greek people. 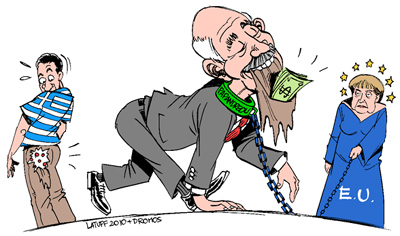 Democracy should be put above markets, said Papandreou. Berlusconi said that the appointment of a government of technocrats would be “an undemocratic coup” that ignored the 2008 election result. But it is still happening. In Greece, Lucas Papademos will become prime minister. He was head of the Greek central bank when Greece joined the euro and boasts of his leading role in achieving that. Now he takes over in order to keep Greece in the euro, a decision that now President Nicolas Sarkozi says was “a mistake.” Papademos was in charge when Greek officials lied about their fiscal position to the EU authorities and he presided over the failure of the Greek government to collect taxes from rich Greeks (like himself). But he is now the financial markets’ own man. Greece is to be run by the very man most responsible for getting them into this mess. It’s like Alan Greenspan taking over as President of the United States after Wall Street demanded President Obama step down for failing to cut entitlement spending enough to balance the budget!

In Italy, Mario Monti and Giuliano Amato are to take over. Monti is a mainstream economics professor who briefly worked for (guess who?) Goldman Sachs and then became EU competition commissioner for many years, where he insisted on ‘liberalizing and deregulating’ markets. He is a close friend of the new ECB chief, ‘Super Mario’ Draghi, another Italian banker. In the 1990s, when a number of countries, including Italy and Greece, engaged deliberately in credit swap transactions to take part of government debt and deficits off the official accounts with the connivance and help of Goldman Sachs in particular, Draghi was director general of the Italian Treasury and then joined Goldman Sachs (2002-2005). Draghi and Papademos both got their doctorates in economics at MIT in 1978. Amato is a ‘centre left’ ex prime minister who was close to the corrupt social democrat premier Bettino Craxi of the 1990s. He was head of the Italian anti-trust commission which tried to deregulate the economy especially in financial services.

Now Silvio Berlusconi is like the Rupert Murdoch of Italy, only worse. He is Italy’s media mogul who dominated politics there for 15 years through a range of trickery, bribery and corruption (he is facing up to 15 charges in the courts once he resigns), alongside his penchant for parties and young women. His denial of any euro crisis was staggering. He told the press only last week: “The life in Italy is the life of a wealthy country: consumptions haven’t diminished, it’s hard to find seats on planes, our restaurants are full of people.” Speaking earlier at the NY Stock Exchange, he said “Italy is now a great country to invest in… today we have fewer communists and those who are still there deny having been one. Another reason to invest in Italy is that we have beautiful secretaries… superb girls.” In the earthquake that hit central Italy in 2009, he told homeless survivors that they should see their plight “like a weekend of camping.” And so it went on.

But at least Berlusconi was elected. Now he is to replaced not by new elected leader but by central bankers and investment bankers. They will take orders from the EU, the ECB, and the IMF, the dread Troika. The IMF is led by ex-French finance minister Christine Lagarde. Lagarde used to head up a global law firm that advised on ‘creative accounting’ schemes for government debt and her deputy David Lipton used to work at Moore Capital, a global hedge fund. The EU body that will oversee the Greek bailout package and may buy Italian debt is the EFSF. Its headed by Klaus Regling, who worked at hedge fund Moore Capital! In 2009 he lectured: ”The monetary union will work better in the next ten years than in the last ten years, considering the overall scheme of things.” Fees from EFSF bond issuance will be worth 1 per cent of a likely $100-billion of issuance to the big European banks and the likes of Goldman Sachs. So they will be making good money out of the ‘bailout’ funding.

These bankers are now in charge because the elected leaders of the Greek and Italian people were unable to satisfy the demands of investors in their government bonds. Europe’s banks, pension and insurance companies and hedge funds stopped buying government debt in Greece and Italy. It’s not that the elected leaders did not try to meet the demands of the financial sector. The social democrat leaders in Greece were prepared to face riots, strikes and opposition in their party to do the bidding of finance capital. Italy’s centre left opposition is now allowing yet another draconian budget in to go through parliament on the nod this week. But all their efforts were not enough to assuage the needs of their creditors. Now the bankers prefer to have their own people directly in charge.

And what is the plan? The bankers will insist on introducing more public sector spending cuts, higher taxes, massive privatization of state assets and other measures to ensure that all the bonds held by the European financial sector are paid back in full and there is no default. The Greeks have been allowed to default partially on 50 per cent of the debts held by the private sector, but so that the average Greek still suffers a 30 per cent reduction in living standards over the next decade. Even that will not relieve Greece of its burden. Government debt will still be at 120 per cent of GDP by the end of the decade at best (probably more like 140 per cent), keeping the burden of repayment on the backs of a whole generation of Greeks. The Italians are facing the same treatment. As one Italian citizen, Pietro Pappagallo, a 58 year-old from Bari, put it:

“I’m worried about my savings that could become waste paper. All the efforts to put something aside and I won’t get anything for it. I’ve already faced four changes of my pension. I had planned my life out and now they say I have to work more. As a father, I worry for my children, who will probably never have a pension.”

Finance capital wants to be paid in full (with the least amount of default on their investment). But the Euro leaders also want what they see as profligate states like Greece and Italy to toe the line on fiscal prudence and run balanced budgets and get their debt down so that the burden of taxation on the profits of the capitalist sector can be reduced. And they want the Eurozone to survive as the core of Europe’s prominence in world affairs. The breakup of the euro would be disastrous for that. But after the traumatic events of the last few months, they are now prepared to countenance the ousting of Greece from the euro unless they meet their fiscal targets and slash living standards for the Greek people. But if Italy fails, then the euro would break up. That is why the bankers have taken over.

The reality is that, despite all the efforts of the social democrat leaders in adopting ‘neoliberal’ policies of fiscal austerity, privatization, reduction in pension benefits and the destruction of the labour protection laws, Greece will still not meet the targets set by the Troika. They are set to default outright in 2012. Italy is different. Although its government debt ratio is high by European levels, most of that debt is owed to Italian banks and not to foreigners; the government is already ‘balancing its books’ (if you exclude interest payments on the debt) and Italian capitalist industry can still sell things overseas. So Italy can avoid default – at the expense of living standards, jobs and public services.

There is an alternative to this misery. I have outlined it in previous posts (see “An alternative programme for Europe”, 11 September 2011). Democratically elected governments in both countries should announce together that they are defaulting on all public sector debt held by the private sector. If that busts their banks (as it would), they should be taken over with customer deposits protected and then run as public enterprises directed to lend to industry and households to boost investment and consumption. Instead of slipping into a debt spiral that leads to economic recession (or continued depression as much of Europe is already in), recovery could be kickstarted by state-led investment. Of course, this is anathema to Europe’s capitalist leaders and capitalist sectors because it would threaten the profit-based economy they preside over. So instead, we shall have the bankers rule. •

This article first appeared at thenextrecession.wordpress.com.