Occupy Wall Street, the Trade Union Movement and the Fight to Stop the Cuts and Concessions

Tens of thousands – if not hundreds of thousands – of people have taken to the streets over the past four weeks across the United States as part of an Occupy Wall Street movement to protest the intolerable conditions of massive unemployment, growing inequality, rampant home foreclosures, and stepped-up cuts in the social safety net. Their outrage has been especially focused against the bailout of Wall Street, while Main Street has been left to languish, and the takeover of the political system by big-money interests. 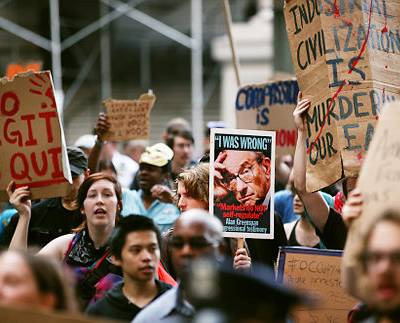 A growing number of trade unionists have joined this movement, first as individual workers, then as part of an increasing number of union contingents that have joined the OWS activists to build large protest actions, often with more focused political demands.

One of the largest actions in the San Francisco Bay Area, for example, witnessed thousands of union and community activists – mostly Black and Latino – marching to Wells Fargo Bank on October 12 in response to a call by the union-based Jobs with Justice, Causa Justa and other organizations to demand an immediate halt to home evictions and a moratorium on foreclosures. Their leaflet included the following wording:

“We are the 99%. From Wall Street to Market St., we demand an end to racist profiteering off of foreclosure and immigrant detention! We demand full employment, social services and civil liberty for all. From San Francisco to Kabul, we demand an end to corporate war and militarism that target communities of color, tearing our families and planet apart.”

This explosion of anger against the unbridled greed of the capitalists – particularly the banksters and speculators – is legitimate. The protesters speak for millions of people in this country. They speak for the working-class majority. They speak for the 99 per cent – all of whom have said in one form or another, “Enough is Enough!”

Obama and Democrats Seek to Co-Opt the Movement

President Barack Obama says he shares the values of the Occupy movement. “I think people are frustrated, and the protesters are giving voice to a more broad-based frustration about how our financial system works,” Obama declared.

MoveOn.org, Progressive Democrats of America and many other liberal groups have explicitly urged their supporters to join OWS to help steer this movement toward their overall goals, including their goal of “stopping the right wing in November 2012” – by which they mean vote for Obama. Some prominent figures are calling for the OWS to play the same role in relation to the Democratic Party that the Tea Party has played in relation to the Republican Party.

But what is the Obama administration doing? What is the record of his administration? The Obama administration had a majority in the Congress. It could have challenged Wall Street and begun to implement the change that the millions of people across the nation had demanded when they voted for Obama in 2008. But it did just the opposite. It bailed out the banksters and speculators to the tune of more than $4-trillion – more than half of which is still sitting in the Wall Street coffers collecting interest while more than 27 million people are unemployed and more than 50 million people face foreclosures.

And today, Obama and the bipartisan congressional “Super Committee of 12” are pushing forward with even more devastating plans. Obama, in keeping with the “Grand Bargain” deal he had struck with House Majority Leader John Boehner last spring regarding the budget deficit, is urging the “Super Committee” to enact cuts of up to $3.5-million in the social safety net – particularly in Social Security, Medicare and Medicaid – over the next 10 years.

The program most immediately targeted by the politicians in the pay of the Wall Street operatives is Medicaid, which affects the lives of 58 million recipients and their family members. Forty-nine per cent of Medicaid recipients are children, 25 per cent are adults, 10 per cent are older Americans, 15 per cent are disabled, and all are low-income.

Cuts to Medicaid are especially dangerous for Blacks and Latinos, who are more likely to rely on this vital program. If people on Medicaid lose their benefits, the results will be greater illness and disability, increased poverty, and even death.

This is why the central question facing the OWS movement – and the working class majority as a whole – is putting an end to the murderous cuts against working people, beginning with an end to the cuts in Social Security, Medicare and Medicaid – all of which are imposed by the Wall Street/credit agencies’ dictates, in the name of balancing the budget deficits.

The demand that needs to be raised louder and louder to ensure the independence and fighting unity of this movement is: “Make Wall Street Pay For the Crisis, NOT Working People! STOP THE CUTS AND CONCESSIONS, NOW!”

And this demand – coupled with specific demands to address the crisis such as “Nationalize the Banks!” or “Repossess the $2.2 Trillion in the Wall Street Coffers to Fund a Public Works Program to Put 27 Million People Back to Work!” – must be addressed to the politicians in Washington. They are the ones who make the decisions. They are the ones who can make Wall Street pay.

Responsibility of the Trade Union Officials

Toward this end, the entire working class, beginning with the trade unions and their community partners, needs to be mobilized. It is the responsibility of the trade union officials to organize everywhere this mass mobilization, independently of the Democratic and Republican parties, which have been bailing out the banksters and pushing the bosses’ austerity measures. And this all-out mobilization of the working class has to take place at the federal, state and local levels.

The trade unions have the means to organize these mass mobilizations and strike actions to demand: “No more concessions! Make Wall Street Pay for the Crisis!” With the growing momentum created by the OWS movement, the time is now for labour and its community allies to pull out all the stops and organize the kind of fightback that can put a stop to the ruling-class assault and turn things around in the interests of the working-class majority.

But, clearly, the trade union officials are not doing this. AFL-CIO President Richard Trumka has given lip service in support to the OWS movement, but he has not called out all the troops to take to the streets to demand “Stop the Cuts!” or “Jobs For All!” Instead, he is urging union members and their supporters to support Obama’s new Jobs Act, which at best would create jobs for 1 to 2 million people, while furthering depleting the Social Security fund to pay for his jobs program – which is unacceptable.

Likewise, Leo Gerard, president of the United Steelworkers of America (USWA), has lavished great praise upon the OWS, but only to urge the movement to help labour fight the Republicans in 2012.

This “support” by the labour officialdom for the OWS is a convenient way for them to get off the hook. It is easy for the labour officials and their Democratic Party allies to point their fingers at Wall Street. Even the Tea Party people have targeted Wall Street and the Federal Reserve Bank. But the union tops are not putting any resources into mobilizing their members, and – more important – they are not confronting the politicians that have enabled the Wall Street fat cats to get even fatter on the backs of working people.

The labour officialdom’s silence in relation to the impending assault on Social Security, Medicare and Medicaid is deafening. Without a doubt, a deal has been struck between Obama and Trumka to get labour to go along with these cuts in exchange for a pledge by Obama to seek some meager sources of tax revenue from Wall Street and the rich.

In the San Francisco Bay Area, a large number of local trade unions have come together with a wide array of community organizations in a Re-Fund California coalition. They are calling for major protests in San Francisco and Long Beach, California, on November 9-17, when the regents of the University of California and the California State University systems gather to discuss implementing major tuition increases and program cuts (including cuts to ethnic studies departments statewide) that would further devastate these once proud public university systems.

“Our growing movement is not a moment too soon. This week, state budget analysts are expected to propose about $2.5-billion in new cuts to education. …

The California Faculty Association has called for strikes at two CSU campuses (East Bay Hayward and Dominguez Hills) during this period to demand NO CUTS!

Student and union activists – including general assemblies of the Occupy Wall Street movement at campuses such as San Francisco State University – are coming together across California to support this November Week of Actions. Demanding “No Cuts, No Concessions!” and building mass mobilizations, organizing walkouts and sit-ins, and promoting strike actions on other CSU campuses are the order of the day.

“No Cuts to the Social Safety Net!”

Building on the momentum of the OWS movement and forging united-front coalitions such as those taking shape in California to stop the cuts in public education can and must take place across the country around this or other crucial demands of concern to working people.

Most important, these actions can become stepping stones in the fight to stop the massive cuts in the social safety net – perhaps the biggest attacks ever on the working class and all the oppressed in the history of this country. 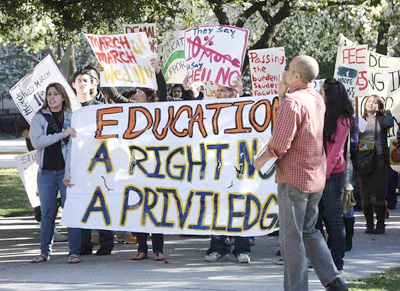 In the San Francisco Bay Area, trade unions and their community allies are beginning to organize for a mass action the first week of December to demand “No Cuts to Social Security, Medicare and Medicaid. The “Super Committee of 12” is expected to release its recommendations to the Congress at the end of November, and the Congress is expected to vote on these recommendations before the end of the year.

The San Francisco Labor Council is organizing a teach-in on October 24 to educate about the impending attacks on the social safety net and to build a coalition – together with other Bay Area labour councils, CARA, Jobs with Justice, and other community organizations – with the aim of organizing a mass action in the streets that can send a powerful signal that working people will not accept the cuts. Similar teach-ins and coalitions can and must be organized all across the country.

Most important, if working people are to succeed in forcing the Congress to say “No” to the Cuts in the social safety net, it will be necessary for the AFL-CIO, Change to Win, the NAACP, the main retiree organizations – and all the organizations that over the past four weeks have supported the Occupy Wall Street movement – to draw a line in the sand and fight the cuts by any means necessary, including organizing a one-day walk-out/sick-out/strike/day of action, together with the OWS movement, around the specific demand of “No Cuts, No Concessions!”

To get there, it will be necessary to organize “No Cuts/No Concessions Committees” in unions and community organizations to (1) build local actions against the cuts in the social safety net and (2) press the national leadership of the trade union movement to issue a national call to action against these cuts, preferably during the first week of December.

The tide of resistance is rising. The time for action is now! •

Written by the Editorial Board of The Organizer newspaper, where this article was first published.

Socialist Organizer, the U.S. section of the Fourth International, is a multi-racial, nation-wide organization active in struggles for workers' rights, against racism, sexism, homophobia, and imperialist war, and in defense of the trade unions, public education and all gains won through the class struggle.