Occupy Wall Street: Beyond the Rhetoric

One of the distinguishing features of the Occupy Wall Street (OWS) movement is its apparent lack of central leadership. Not only does the movement seem leaderless; it does not appear to be organized around any clearly defined ‘demands.’ This has been perceived as something quite positive for participants and supporters of the movement, while being the primary point of criticism from opponents, particularly the mainstream media. Clearly, OWS stands against the unfair balance of wealth distribution in the United States (and around the world, for that matter), the unfair neoliberal politics that have swept the globe over the last four decades, corporate greed (especially in the financial sector), and various forms of systemic violence resulting from structural inequalities built into the capitalist system of exploitation. But what media pundits are looking for is something that they can represent: something, that is, with a timeline, that defines when the protestors will be ‘satisfied.’ This makes OWS qualitatively different from the Tunisian and Egyptian uprisings that took the world stage last winter, popularly touted as the ‘Arab Spring.’ These groups had clearly defined ‘demands’: first and foremost was the overthrow of their political leaders. OWS is distinguished from the Arab Spring to the extent that its definitive aims and goals have yet to be defined. 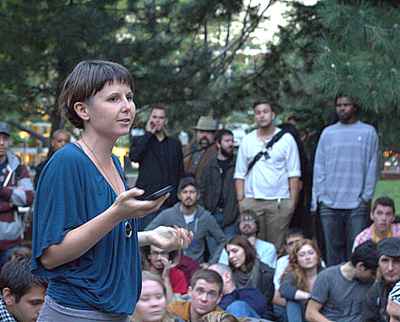 The movement has gone beyond the various ‘–isms,’ labels that media pundits and the corporate elite find easy to dismiss: ‘communism,’ ‘socialism,’ ‘anarchism,’ ‘Leftism,’ etc. Commentators outside the United States have started to take notice. CBC business personality, Kevin O’Leary made a mockery of himself last week during a live interview with the Pulitzer Prize winning journalist, Chris Hedges, by referring to him as a “Left-wing nut-bar.” The more intelligent and articulate Hedges responded by suggesting that most of the protesters are more ‘conservative’ in the sense that they desire a return to the rule of law in opposition to the radicalism and neo-feudalism of the financial class. O’Leary’s frustration in the matter shows that perhaps part of the success of OWS so far can be attributed to the fact that, as the discourse theorist, Ernesto Laclau, pointed out over a decade ago, “empty signifiers” matter to politics.

Why Do “Empty Signifiers” Matter to Politics?

For those unfamiliar with the language of semiotics – the ‘science of signs’: every word in a language (a sign) can be divided into two elements: a signifier – the word itself – and a signified – the concept pronounced and articulated by the signifier. Ferdinand de Saussure, the Swiss linguist who first developed semiotics, argued that the meaning of any term in language is derived, not from its direct relation to reality, but through its difference from all of the other words in the same language. ‘Tree’ means ‘tree’ because it does not mean ‘bush’ or ‘flower.’ One need only look through a dictionary to grasp this concept, where all words are defined with reference to other words.

The French post-structuralist philosopher, Jacques Derrida, referred to the system of differences in language as a process of différance, by which he meant that language consists of a constant deferment of meaning. In contrast, his contemporary, the psychoanalyst, Jacques Lacan, claimed that, in order for anything to mean anything at all, every language is fixed at some point through the operation of an empty ‘Master-Signifier’ that arrests the meaning of all of the other ‘floating signifiers.’ Every other word in a language gathers its meaning by distinguishing itself from some primary, empty ‘Master-Signifier,’ or a signifier without a signified.

Laclau argues, then, that empty signifiers are important for political hegemony. The theory of hegemony that he identified, together with Chantal Mouffe in their seminal text, Hegemony and Socialist Strategy: Towards a Radical Democratic Politics (1985), relies upon the Lacanian concept of the signifier without a signified. Every political movement – both at the level of the reigning ideology and that of opposition – must be coloured and tied together (‘sutured’) by some particular content that is supposed to stand in to represent the universal constitution of the political and social order. The empty signifier ties people together into a single political movement or group. A prime example is the way in which the category of the ‘middle-class’ has recently been deployed by politicians in both the United States and Canada, across the political spectrum. The ‘middle-class’ is such an ambiguous term that it would seem to refer to almost everyone.

Political discourse is often flooded with other rhetorical empty signifiers such as ‘freedom,’ ‘rights,’ ‘justice’ and, significantly, ‘democracy.’ The last half-century has even seen the Rightist appropriation of Left signifiers, such as ‘communism’ and ‘socialism’ to signal something negative in relation to the authoritarianism of the Soviet Union. These are now terms that are used to dissuade people from choosing alternative approaches to politics. 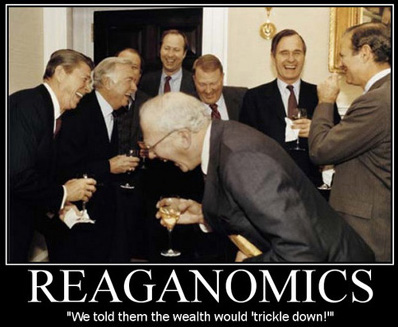 Laclau, though, has recently moved away from his notion of hegemony and toward a new conception of populism for the Left. In his book, On Populist Reason (2005), he argues in favour of the creation of a populist political force on the Left, which he refers to as ‘the people.’ Laclau’s ‘people’ emerge as a force that transcends particular political agencies: the ‘proletariat,’ or the ‘working-class,’ in Marxian terms. Laclau’s ‘post-Marxism’ draws strength from the postmodern turn in cultural politics, with the rise of New Social Movements (NSMs) in the 1960s and 1970s, such as the Civil Rights Movement, Post-Colonialism and Anti-Racism, the Feminist Movement, and the Gay Rights Movement. These movements all emerged as non-classed based approaches to politics. Significantly, the NSMs emerged at a time when it began to appear as though class-based politics did not pose enough of a threat to existing forms of power; nor did class-based politics seem to address wider political concerns. Moving into the 1980s, the conservative ‘working class’ also appeared to side with the conservative populism of the ruling elite, particularly in the case of Thatcherism and Reaganism. The unity between the various identity groups, according to Laclau, must come by way of their organization around an antagonism with some ‘nemesis’ or enemy. It is by way of their unified opposition to this subjective enemy that political alliances are formed between the various political-cultural groups. Certainly this nemesis can be something like global capital or the financial class. However, Slavoj Žižek warns that this kind of populism has the potential to degenerate into some form of neo-Fascism.

Populism, according to Žižek, obfuscates the objective violence of the system of capitalist exploitation by displacing it onto some external, subjective, enemy/intruder who disrupted the stability of the system. A populist perspective, in other words, sees nothing wrong with the system itself, internally, but instead perceives the intrusion of some external factor as that which caused the disruption. Nazi anti-Semitism is the clearest example of Fascist populism, which, rather than locating the cause of the crisis of the 1930s in something internal to capitalism, displaced the class struggle onto the anti-Semitic figure of the Jew. Unlike the Rightist Tea Party movement, which lays blame for the current crisis using racist, sexist, and homophobic rhetoric, OWS does not appear to be organized around some kind of populist politics, at least not in the sense used by Laclau or Žižek. The movement, though, is popular in the Gramscian sense, as evinced by the language of the ‘99%,’ which seems to be articulating popular frustration precisely in terms of ‘class warfare.’

Despite the bickering and moaning of the Republican Party and the ruling elite in the United States, one should not shy away from using ‘class warfare’ as a phrase to identify the current political confrontation – but it is necessary to point out that warfare was first declared upon the ‘99%’ who have finally decided to fight back in such a non-violent way that it may begin to be felt by the ruling ‘1%’ as something tremendously violent since, at the present moment, the movement exists in a form that makes it very difficult to assimilate into dominant discourse. There is something ‘real’ (for social theorists, in the Lacanian sense), about the current movement in its ability to resist symbolization by the mainstream media on their terms (on the side of reigning ideology).

It is perhaps possible to claim that OWS has taken on the form of the ‘multitude’ defined by Michael Hardt and Antonio Negri – in fact, there has already been talk of the role played by their book, Empire (2000), in theorizing OWS avant la lettre. But it may be important to take note, again, of the way that term ‘middle-class’ has been used in recent political discourse, both in reference to OWS and in reference to the wider group of ‘hard working Americans’ often invoked by politicians. In the context of the United States, the ‘middle-class’ is ultimately tied to the ideology of the American Dream. Yet, something sinister remains in the use of this term.

Contradictions Within the System

Over 150 years ago, Marx and Engels argued in The Communist Manifesto that capitalism would eventually contribute to the force involved in its own destruction: the proletariat. The latter is more commonly known as the ‘working-class.’ But it is necessary to distinguish between the proletarian class position and that of the ‘working-class’: the former is an agency of social transformation, while the latter represents a position in the existing social order. I would risk the argument that, today, the term ‘working-class’ evokes an image of industrial/factory workers, or service and public sector workers, and the organization of labour through unionization. But I would argue as well that those referred to as ‘the middle-class’ by media personalities and politicians – the group of ‘hard working families’ – are much closer to what Marx and Engels had in mind when they spoke of the proletariat. The ‘99%’ are much closer to those forces that Marx and Engels predicted would bring the eventual destruction of the capitalist class, i.e., the ‘1%.’ They are those who continue to be exploited objectively by the capitalist mode of production, and are divided by the so-called ‘Culture Wars’ and ‘identity politics.’ Occupying an objective position (as opposed to divided subjective positions defined by Culture Wars and identity politics), within the system, is what has brought the ‘99%’ together. They have been brought together, not in reference to some external intruder who disrupted the system (as in Laclau’s populism), but in reaction to those who first waged class warfare, politically and systemically, on the ‘99%’ themselves. The ‘1%,’ in whose interest the capitalist mode of production is organized, has been targeted, not as an enemy/intruder who disrupted the system from outside, but as the class responsible for the system itself.

In the battle to defeat propaganda from the corporate media and criticism from those who side with the system – a system that benefits none but the top ‘1%,’ it may be necessary to resist the temptation to articulate definitive demands and signifiers of oppositional rhetoric according to a pace established by them. It may also be necessary to appropriate those political terms (signifiers) often used by those in positions of power, i.e. ‘family,’ ‘freedom,’ ‘justice’ and ‘democracy.’ Doing so can bring solidarity between the various different identity groups who all feel the weight of exploitation under capitalism. But at some point soon – and this point may rapidly approach – ‘new signifiers’ may need to be adopted internally in order to lead the movement forward. Just as the OWS movement is showing innovation in organizing popular anti-capitalist sentiments, there is still a need for organizational experimentation in political forms, capable of effectively breaking us out of the limits of liberal democracy. •

Matthew Flisfeder is an associate professor of Rhetoric and Communications at The University of Winnipeg. He is the author of Algorithmic Desire: Toward a New Structuralist Theory of Social Media (Northwestern University Press, Forthcoming 2021).