While I was cursing the inane mainstream commentary on the global economy recently, I was reminded of a pivotal scene in the 1976 movie, All the President’s Men. As two young reporters investigate the burglary of Democratic Party offices in the Watergate Hotel, a disgruntled, high-ranking FBI agent, code-named Deep Throat, advises, “Follow the money. Always follow the money.”

They did. And, in the process, the real-life journalists, Bob Woodward and Carl Bernstein, blew the lid off one of the great scandals of 20th century politics. Since then, investigative reporting in the mainstream has gone the way of the dodo. As Bernstein noted twenty years after Watergate, “the media – weekly, daily, hourly – break new ground in getting it wrong.” 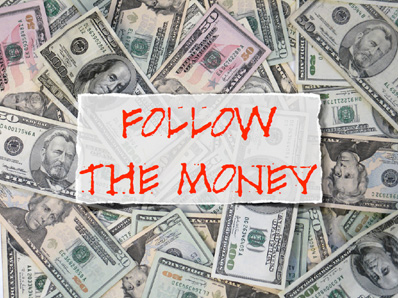 And nowhere are they getting it more wrong than in their coverage of the debt crises in Europe. Over and over again, we are treated to the most vacant banalities. “Greece lived beyond its means,” pundits intone, “and now it must pay its bills.” So too for Ireland, Portugal, Spain, Italy. . . all of which are said to be cases of out-of-control people who now must get their houses in order – by way of huge cuts to government programs.

Yet these cuts, known in the jargon as austerity measures, represent political crimes of equal if not greater magnitude to that burglary at the Watergate – though you would never know it by consulting the mainstream press, which long ago lost any inclination to follow the money.

Bailing Out the Banks … Again

But were journalists to heed Deep Throat’s counsel, they would be forced to draw an inescapable conclusion: The multi-trillion dollar rescue of the banks that started in 2008 has not ended. It continues today under the guise of sovereign debt bailouts. And the cutbacks – to pensions, education, welfare, and public sector jobs – that wreak havoc on the lives of millions are all about funnelling public wealth to banks, pure and simple.

Consider this. As of the middle of 2011, German banks had loaned out about 170 per cent of their total equity capital to governments in Greece, Ireland, Portugal and Spain. French banks had about a 100 per cent capital exposure to the same governments.[1] The number shoots significantly higher when Italy is added to the equation. U.S. banks meanwhile, hold about $700-billion of government debt from the five shakiest Eurozone economies.

While a virtually inevitable Greek default is unlikely to topple banks – outside of Greece, that is – it could well set off a series of debt crises and further defaults that will bring some down. As sovereign debt defaults appear increasingly unavoidable, so do multi-billion dollar bank losses. That’s why the stock of French banks like BNP Paribas and Société Générale has been in freefall in recent months. It’s why large firms, banks, and hedge funds have been pulling their money out of Euro banks.

We are, in short, very close to seeing ‘World Financial Crisis: The Sequel,’ a disaster with enormous implications. Yet, where is the investigative reporting about the underlying causes of this? Where are the stories explaining how it is that three years after the collapse of Lehman Brothers investment bank triggered an acute financial meltdown in 2008, so little has changed?

In the absence of serious analysis, we are repeatedly subject to thoroughly moronic reports blaming the people of indebted nations for the mess. Remember the scapegoating of poor people in the U.S. who took out subprime mortgages? It was all the fault of the poor, you see, rather than the banks that wheeled, dealed and conned them into borrowing – all in an effort to create toxic but highly profitable mortgage-backed securities that could be sold to investors. It was, in short, predatory lending to boost financial profits. Pretty much the same thing happened in Ireland, Spain and Britain. At the same time, banks in Germany and France sent their salespeople to sell loans to governments and banks in other parts of Europe. Now, those same banks are watching in horror as their loans turn sour, just as real estate loans did in the U.S. a few years earlier, and they too are blaming the borrowers.

“Just as in the global bank crisis of 2008-09, bank profits are private, but their losses are public. Not exactly the free market. But it’s a nice deal for profligate bankers.”

Worse, just as they did in 2008-09, governments are rushing to rescue rickety banks with public funds. That’s why the European Central Bank, the IMF and Europe’s leading powers keep bailing out ailing states like Greece, Ireland and Portugal. Again: follow the money. When debt-strapped governments receive hundreds of billions in new loans, that money is immediately sent into the coffers of private banks as payments on past loans. The whole situation, observes one writer in the Financial Times, “resembles a pyramid or Ponzi scheme” in which original lenders are paid back with new loans.[2] The difference is that the new loans are coming from public funds, which is another way of saying that private banks are being rescued once more by the people. Just as in the global bank crisis of 2008-09, bank profits are private, but their losses are public. Not exactly the free market. But it’s a nice deal for profligate bankers.

And the scale of this cozy deal is breathtaking. In July, the U.S. Government Accountability Office published a document detailing the bank bailouts. Between December 2007 and July 2010, it shows, more than $16-trillion was channelled by the American government into U.S. and European banks.[3] Trillions more were spent to bail out U.S.-based auto corporations and to fund stimulus programs. Additional trillions were dished out in bank rescues and stimulus programs in China, Latin America, Europe, and beyond.

At the time I released Global Slump (December 2010), my estimate for the combined global bank bailout and stimulus spending was in the range of $21-trillion, or more than one and one-half times U.S. gross domestic product.[4] It is now clear that my estimate, among the largest (and arguably most accurate) at the time, was many trillions shy of the real total.

That astounding bailout of global capital drove a massive build-up of government debt. Engaged in a world-wide intervention without precedent, states borrowed in debt markets (by selling government bonds). Now, in light of the scale of the accumulated debt, some lenders have grown gun shy. They doubt the capacity of many governments to repay. As a consequence, lending rates have soared: Italy and Spain can only borrow (for ten year bonds) at rates in excess of five per cent. For Ireland, the rate is pushing toward nine per cent; for Portugal it already exceeds 11 per cent; and for Greece it has hit a nightmarish 23 per cent. And when it comes to short-term borrowing, Greece has already been shut out of money markets, which are demanding an interest rate of 80 per cent on its two-year bonds. In sum, Greece is broke and a default is almost certainly just a matter of time.

Extortionate borrowing rates on this scale mean that the debt crises just get worse. Barring a miracle – or our preferred option, default – each of these countries will be more indebted next year, and the year after that, notwithstanding slash-and-burn austerity programs. Meanwhile, those programs, with their massive cuts to government spending and huge public sector layoffs, invariably deepen the economic crisis. Already, the official unemployment rate in Ireland has catapulted above 14 per cent (27 per cent for youth), while in Spain it tops 21 per cent (45 per cent for youth). Greece, meanwhile, is in a full-fledged depression, its economy contracting by 5.5 per cent this year with no sign of recovery for years to come.

And yet, as debt mounts, the cuts keep coming. Greece’s latest austerity package includes a two billion euro cut to healthcare spending and elimination of 30,000 more public sector jobs. On the heels of earlier measures, Ireland has slashed 20 per cent from the salaries of nurses and other public employees, while also reducing child and social welfare benefits. Everywhere, the most vulnerable are being sacrificed so that banks may prosper.

Even the odd central banker has been compelled to acknowledge that truth. Speaking to British Members of Parliament in May, Mervyn King, governor of the Bank of England, observed, “The price of this financial crisis is being paid by people who absolutely did not cause it.” Furthermore, he continued, “Now is the period when the cost is being paid, I’m surprised that the degree of public anger has not been greater than it has.”

Of course, there has been massive resistance: general strikes, youth occupations of city squares in Greece and Spain, popular uprisings in Tunisia, Egypt and beyond, a student-led upheaval in Chile.[5] But in much of the world, the degree of public anger has been surprisingly low – at least thus far. And part of the responsibility for that lies with a media culture that blames the victims and refuses to follow the money.

That is one reason we need radical political economy now more than ever. One of the secrets of capitalism, after all, is the way in which it obscures and conceals processes of economic exploitation. Wealth moves and accumulates along hidden circuits that tend to elude us. Serious economic analysis thus requires real detective work, investigative acts that uncover capitalism’s dirty secrets – sweatshops, child labour, migrants toiling in fields and on construction sites, and the fantastic wealth all of this makes possible for a few.

We need the same critical sensibilities when it comes to the debt crises that are rocking parts of Europe at the moment. In the face of the banal mainstream discourse of undisciplined borrowers, we need to demonstrate that, as one senior economic advisor at UBS bank puts it, we are dealing with “a once-in-a-generation crisis of capitalism.”[6] That crisis has ratcheted up the system’s crimes against the innocent. And there is a powerful way to expose that: Follow the money. Always follow the money. •

This article first appeared on David McNally’s blog at www.davidmcnally.org.

1.
See the charts assembled by Martin Wolf, “The Eurozone after Strauss-Kahn,” Financial Times, May 17, 2011.

5.
See my previous blogs, “Night in Tunisia: Riots, Strikes and a Spreading Insurgency,” January 18, 2011, available at: davidmcnally.org/?cat=6; and “Mubarak’s Folly: The Rising of Egypt’s Workers,” February 11, 2011, available at: davidmcnally.org/?p=354. On the student protests in Chile, see Manuel Larrabure and Carlos Torchia, “‘Our future is not for sale’: The Chilean Student Movement Against Neoliberalism,” The Bullet, No. 542, September 6, 2011.