The Size Of The U.S. Public Debt

Are The Rating Agencies Fools or Knaves?

It is quite possible that you believe that the U.S. public debt is quite large. You may even think that it is dangerously large, as in ‘unsettling financial markets.’ If you harbour these beliefs it may come as a surprise that the public debt is not very large, and by any rational calculation the ‘burden’ it imposes is tiny. 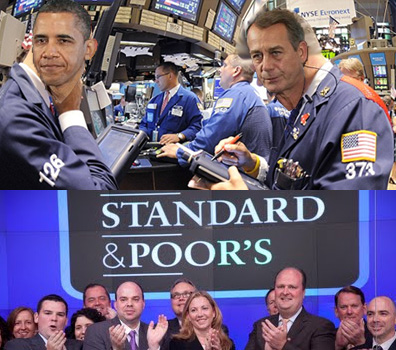 Demonstrating the validity of these apparent heresies requires a branch of advanced maths, known as arithmetic. To make the proof even more difficult, I shall begin by invoking a bit of common sense. The common sense consists of three general rules. The first is that a debt is a potential problem if it is owed to someone else. Indeed, it could be said that a debt you owe yourself is not a debt.

Second, there is a difference between a debt that was contracted for an asset and one contracted for immediate consumption. For example, when one borrows to purchase a home, the debt (mortgage) has an asset whose value compensates in part or whole for the debt. Thus, the net debt of a person or household equals what is owed to others minus the assets of the household or person.

Third, the cost or burden of a debt is what a person or household must pay to others in interest and to reduce the original value of the debt. To keep to the mortgage example, its running cost is not the amount of it, but the periodic interest and repayment of principal (‘debt service’).

Next, the liquid assets of the U.S. government, gold reserves, holdings of foreign currencies, bonds, etc., should be subtracted out to obtain the net debt. By the international standard methodology of the Organization of Economic Cooperation and Development (OECD), the net debt of the United States was just over six trillion dollars at the end of 2010, well less than half of the nominal total of 14 trillion. In other words, take out what the government owes itself, take out government liquid assets, and the debt was just over forty per cent of GDP, not close to 100 per cent.

But that’s not the end of the story. The major reason that the press and politicians carry on about the debt is the terror of the merciless ‘financial markets.’ So, how much of the debt, gross or net, is held by these gnomes of finance? This is difficult to estimate precisely, but there are obvious candidates for exclusion, beginning with state and local governments. This portion of the federal debt, which includes public employee pension funds, was five per cent of the total in 2010. This brings the maximum possible ‘financial market debt’ down to about 7.5 trillion gross and barely six trillion net.

Then, there is all that debt owed to China, $1.1-trillion at the end of 2010. Whatever nefarious plans the Chinese government may or may not have for its debt holdings, they do not include financial speculation. Nor is there any safer liquid form in which the Chinese government could hold its massive foreign exchange reserves. When we make the reasonable subtraction of the Chinese debt from the total, the maximum gross debt potentially vulnerable to speculation falls to $6.5-trillion, considerably less than half of GDP. The net equivalent drops to less than a third of GDP.

To summarize, when we take out what the federal government owes itself, the U.S. public debt is a smaller proportion of GDP than the same debt measure for any other major developed country. Indeed, it is so low that it is no problem. When other obvious calculations are made, net instead of gross, public bonds held by local and state governments, you have to think, where is the problem?

Ah, but the problem is not the size of the debt, say the neo-Scroogians. The problem is servicing it, paying the interest. Not much of a problem for the United States, I fear, as the table below shows clearly. Of the five largest developed countries, payments on the gross debt as a percentage of GDP was lower only for Japan. By contrast, putatively frugal German government paid out considerably more than the United States Treasury, and France and the United Kingdom were far above. Even more, the interest on the net debt was just one per cent of U.S. GDP in 2010.

Not-so-fast, argue the ‘deficit hawks’ (vultures, more like it), now down to their last argument: if ‘financial markets’ take fright, they will drive up interest rates and that little one or 1.6 per cent will go through the roof and be unsustainable. But, how can ‘financial markets’ drive up interest rates when at most they have access to less than half of gross debt? Even, more, how would they do it when any new borrowing by the U.S. government can be from itself (e.g., the Social Security Trust Fund) or the Chinese government? The answer is obvious and requires no expertise in economics: ‘financial markets’ cannot drive up U.S. interest rates. Quite the contrary, the bizarre ‘downgrade,’ by creating international economic instability, increased the demand for U.S. government debt, putting downward pressure on U.S. interest rates.

The U.S. government is not and never has failed to meet its debt obligations. The obligations it has flagrantly failed to meet are providing for the education and health of its population, repairing the country’s public infrastructure, and preventing state and local governments from going bankrupt, thus reducing or eliminating their ability to do their social duty. The false claims of federal default are the mechanism by which the rich and powerful, aided by the rating agencies, will further enforce the real default on social and economic justice for people in the United States of America. •

This article first appeared on the Social Europe Journal website.

John Weeks is an economist and Professor Emeritus at SOAS, University of London. He maintains a blog at jweeks.org.