Eurozone Debt Crisis on the Road to Credit Crunch II?

The public debt crisis that is currently at its deepest in the Eurozone has its roots in the general crisis of capitalism. To attempt to solve capitalism’s crisis of the 1970s and the dynamic path it has followed since then vast amounts of credit were made available over the last three decades. This was carried out to ensure: 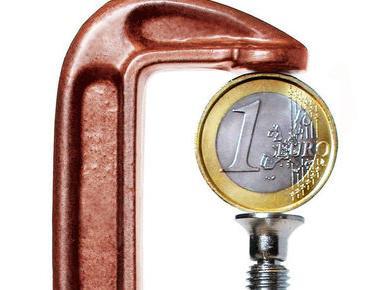 Public spending was used to support structurally weak economies as a result of capital flowing east and the credit bubble was exacerbated by the U.S. cutting interest rates sharply to lessen impact of the dot.com bubble bursting and the resulting recession at the turn of millennium.

A European Twist to the Tail

There was a specific manifestation of this phenomenon caused by the Euro. Weak economies with weak currencies entered the Euro – Greece, Portugal, Ireland and Spain. This made their domestic economies less competitive and this was compensated for by taking advantage of being able to borrow at low German interest rates leading to differing outcomes. International and local banks took advantage of this new market for lending. These different outcomes were:

In summary a credit led boom not corresponding to the growth in real production and wealth.

Each country in the Eurozone followed this route to varying degrees of emphasis. The table below shows the variation across the so called weak PIGS (Portugal, Ireland, Greece, and Spain) countries and Germany for comparison.

Of course the credit bubble bust and what followed was the deepest global recession since the 1930s. This led to a bailout of the financial system by governments, the propping up of economies with stimulus measures with the costs borne by governments and the recession led to lost tax revenues and increased welfare spending. All these costs were crystallised into record levels of public debt. This was the case right across the western world. The debt crisis in the U.S. and the UK as well as the Eurozone is a result of this.

The bailout for the PIGS is a bailout of the financial system not the PIGS countries themselves. Public money is being syphoned through the European Union (EU)/International Monetary Fund (IMF) and European Central Bank (ECB) to give loans to the PIGS countries. These loans are being used by countries to pay off loans and interest to private banks and take out new loans with the same banks. They are a further indirect bailout of the banking system. They are not a bailout of indebted countries’ economies. All this is happening because governments fear another Lehman Brothers, a credit crunch II and second deep recession that could lead to a depression

What is the scale of the problem? Lehman was a $631-billion loss. The list below shows European private banking exposure to each of the PIGS countries and Italy’s public and private debt:

U.S. and UK banks have sold $100s of billions of insurance on this debt. A default could lead to a domino effect with the losses much greater than Lehman Brothers with a second contraction in credit and recession – essentially a depression.

Greek Crisis Not Over Yet

The Greek crisis is far from over yet. The banks are being asked to accept a $50-billion default on Greek deficit. It is uncertain that they will accept this in enough numbers. The EU claims this is a one off and will not be repeated in Greece again or in other PIGS counties. The financial markets have shown that they think otherwise. A shortfall in accepting voluntary defaults and the fact that banks are not all willing to take losses will lead to big disagreements between Germany and France/ECB/IMF.

The next deal will be difficult to broker without more money from governments (more debt). On top of that there is quarterly review of Greece’s progress in implementing austerity measures and privatizations to see if next instalment of bailout is released. The €50-billion from privatizations that Greece is expected to raise is completely unrealistic. The austerity measures are driving the economy into a spiral of decline actually increasing the deficit. This means there will be a quarterly debt crisis with eventually an involuntary default occurring either through non-payment, bond holders not accepting losses or a credit downgrade from the credit rating agencies. We are likely to see the same cycle repeated in Ireland and Portugal.

Spain has a huge housing bubble that has partially burst and has further to go with an oversupply of one million houses and 85% of Spanish homes having mortgages. Exposure to this bubble is held by local building societies (Cajas) and losses will be in the €250 to 500-billion range. National Spanish banks are exposed to construction and real estate companies to the tune of €439-billion and €100-billion to Portuguese private and public debt. Spanish public debt is 400% of tax collected and interest payments will grow from 18% of taxes collected to 23% by 2015. In addition there is a €150-billion of debt held by the regions. This situation is not sustainable and a bailout looks inevitable in the next year but is likely to break the size of the European bailout fund (€450-billion).

U.S. and UK Up To Their Eyes in Debt

The debt crisis is real not just in the Eurozone but in the U.S. and the UK as well. The roots of this crisis are the same in the U.S. and in UK. In the U.S. there is the added issue of U.S. government bonds (debt) being held widely by the global banking system as a ‘safe haven’ for capital. These bonds are used as security in global financial transactions and as a cheap source of generating instant liquid cash for banks. A downgrade of U.S. government debt by the credit rating agencies is inevitable even with the debt ceiling being raised as this like Greece merely postpones the problem. This will lead around the world to higher borrowing costs and less capital being made available just when the global economy is slowing down.

In UK public debt is now over 80% of real GDP and annual interest payments are sucking up 12% of the centrally collected taxes – set to grow to 15% by 2015. The deficit is not under control and looks to be heading to £150-billion for 2011/2012 compared to government forecasts of £122-billion. Comparisons to the post war period are irrelevant. We were bailed out then by the U.S. to the equivalent at today’s money of £250-billion on very favourable terms in exchange for the U.S. becoming the dominant global financial and military power. That is the nature of the UK’s special relationship with the United States. The debt to UK GDP ratio only looked so bad in the 1940s because the economy had completely collapsed when war production ceased. Expansion of the economy was rapid as it was rebuilt form the ashes of the Second World War and capitalism boomed with high rates of profit allowing public debt to be paid off over a period of thirty years. This is very different from today’s stagnant declining economy built on a credit system now frozen and competing with the huge emerging economies like China, India and Brasil.

“The left must develop a radical critique of the crisis and radical solutions that solves the crisis in the interests of the majority, that starts by taking the banking system under popular control.”

The left is in danger of leading us blindly into a brick wall if they continue to ignore or downplay the debt crisis. We are rapidly moving to some form of credit crunch II with all that implies. The answer to this from the right will be more cuts and austerity. The left must develop a radical critique of the crisis and radical solutions that solves the crisis in the interests of the majority, that starts by taking the banking system under popular control and ownership and redistributes the wealth from the wealthy and corporations to the less well-off all around the world. Otherwise we face a decade of hardship and poverty. •

This article first appeared at LeftBanker.

Ralph Blake (aka TheLeftBanker) has occupied senior roles in finance for several years and maintains a blog at LeftBanker.