And They Call This a Recovery?

The strut of confidence is gone and the jitters are back. A flurry of dreadful statistics at the end of April made sure of that. On April 26 came the news that the British economy grew a mere 0.5 per cent in the first quarter of 2011. Coming on the heels of a contraction by that amount in the previous quarter, one commentator was prompted to declare that “the UK is teetering on the brink of a double dip recession.”1 Forty-eight hours later the Commerce Department revealed that the U.S. economy had slowed to a crawl, recording a meagre 1.8 per cent growth rate in the first quarter, down from over three per cent at the close of 2010. 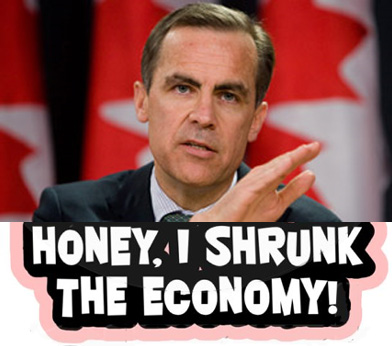 A day later word arrived that the Canadian economy had shrunk in February, and that the official rate of unemployment in Spain had jumped to 21.3 per cent – and the youth jobless rate to a staggering 40 per cent.

Oh, and did I mention Greece? That country’s government, having imposed draconian cuts to public spending only to watch the economy shrivel by nearly five per cent last year, discovered that it would have to offer a 23.5 per cent rate of interest on its two year bonds if it wanted to raise funds in money markets. Bond yields at such extraordinary rates can only mean that the financial sharks smell a Greek debt default coming, which seems an inescapable conclusion.

All of which returns us to an obvious deduction, even if it is resisted by most mainstream economists: this is no more a normal economic recovery than the Great Recession of 2008-09 was an ordinary downturn. Instead, we are in the midst of a much more complex period – one of deep recessions, shallow upturns, high unemployment, government debt crises, renewed recessions, and an ongoing era of austerity – which I have characterized as a global slump.2

Of course, there was no reason to expect a normal recovery in light of what preceded it. The Great Recession of 2008-09, after all, was the deepest and longest downturn experienced by global capitalism since the catastrophic slump of 1929-32. The 30 large economies that comprise the Organization for Economic Cooperation and Development (OECD) underwent a six per cent contraction in Gross Domestic Product (GDP) with jobless rates jumping two-thirds higher on average. World industrial output fell 13 per cent; international trade dropped by 20 per cent; and global stock markets plunged 50 per cent. The largest wave of bank failures in 80 years shook the financial system. All of this should have indicated that, rather than an ordinary recession, we were dealing with a systemic crisis, one that announced the end of the neoliberal phase of capitalist expansion. And recovering from such an event will be very difficult indeed.

As of mid-2011, for instance, well into the “recovery,” annual economic growth in the U.S. and the more robust parts of Europe was in the 2.5 to three per cent range – about half the rate we would expect based on past business cycles. Even during the revival in the middle of the Great Depression, the U.S. economy grew much more dramatically: by almost eight per cent in both 1934 and 1935 and by a stunning 14 per cent in 1936. Yet, so low are rates of expansion today that they are barely making a dent in unemployment. In fact in some parts of Europe, like Ireland, Greece and Spain, joblessness is on the rise. In the United States, as the graph to the right shows, employment is still more than five per cent short of its pre-recession level. Across the entire period since the Great Depression there has never been a “recovery” that produced jobs at so anaemic a rate as what we are seeing at the moment.

The big reason for the failure of jobs to return is that, while profits have recovered, business investment has not. In one major economy after another, corporations are hoarding cash rather than investing it. This is obviously true in European centers, like Germany and Britain, as it is in the U.S. But it is also the case in states like Canada, which escaped the worst effects of the financial crisis and whose economy has been buoyed by rising prices (and export demand) for raw materials. Business investment in new equipment and machinery in Canada was at just 5.5 per cent of GDP in early 2011, compared to 7.7 per cent in 2000, or to just under seven per cent in 2005.3 As for the United States, business fixed investment remained about 15 per cent below pre-recession levels in late 2010, more than a year into “recovery.”4 Put simply, the rise in profits is not translating into new capital accumulation on any meaningful scale. Instead, corporations in the U.S. and elsewhere are simply hoarding cash, holding on to it in larger amounts than at any time in the last 60 years. By the beginning of 2011, in fact, non-financial firms in the U.S. had at least $2 trillion in cash and checking deposits, an extremely sharp increase in their holdings of liquid assets, as the next figure illustrates.5

It does not take rocket science to discern why investment is so lacklustre. First, capacity utilization – the share of existing productive capacity used by business – remains well below historic averages. Secondly, businesses know that with depressed consumer spending, the withdrawal of stimulus, and the turn to austerity (deep cuts in public spending), economic demand will take big hits. Consumers and governments will be spending less, not more, in the months and years ahead. And so, rather than invest, businesses are holding on to their profits, or engaging in speculative activity (in oil, gold, food futures, etc.) unable to see what in the economic picture would justify large expenditures on new plants and equipment. Even in China, where some manufacturers are building plants, the economy is slowing down as the government there tries to deflate asset bubbles and bring down inflation.

Austerity, Debt and the Global Slump

Meanwhile, austerity measures – deep cuts to public spending and layoffs of public sector workers in order to rein in government debt – are driving a number of major economies back into recession or, what is effectively the same thing, into zero-growth scenarios. After having been hit by multi-billion dollar cuts, for instance, Ireland’s Department of Finance now estimates its economy will expand by a miniscule 0.75 per cent this year, less than half the rate predicted only a few months ago. Unemployment, at just 4.4 per cent prior to the crisis, continues to soar, having hit an official rate of 14.7 per cent. The British economy, as we have seen, is limping along at a worse pace than Ireland.

Then there is ailing Greece, where unemployment figures have risen for seven straight months, topping 15 per cent officially, a huge jump from just a year ago. Big surprise that Greek retail sales have plummeted 10 per cent in the past year – during the “recovery” phase of the business cycle, let us recall. Meanwhile, Spain, also frantically implementing austerity, has seen the biggest drop in retail sales in two years, while four out of every ten young people cannot find work, according to official data that seriously understate the real scale of the jobs crisis.6 In short, austerity is kicking the feet out from under an already feeble recovery.

This has prompted a variety of Keynesians to claim that austerity and the removal of stimulus are simply products of the delusional outlook of crazed right-wingers. To be sure, there is something crazed about the deficit-cutters. But, from a capitalist standpoint, they are not entirely wrong. Having to finance deficits by raising cash in financial markets, governments must pay a rate of interest determined by calculations as to the probability that they might default on their payments. That’s why Greece is paying nearly 25 per cent on its two-year bonds. And that is something very real, a genuine financial reality, not just the ideological madness of right-wing nuts. Of course, the Right will attempt to exploit such moments to pursue an aggressive political program of attacks on unions and public spending, something I’ll return to in a future blog.

Very real pressure from global markets compels governments to implement austerity even though this is damaging to the economy. Here we are reminded that capital’s primary concern is not, and has never been, with the “economy,” but with profits and the stability of the system. If those are best achieved in ways that damage jobs and incomes for the majority, so be it. This is why austerity fits the logic of capital even if it means economic stagnation and mounting unemployment. In addition to serving as a reminder that the interests of capital have nothing to do with economic growth and well-being, it also underlines why the only economics and politics capable of effectively resisting are anti-capitalist ones. Only sustained processes of political education, mobilization and resistance will determine whether this insight will become widespread in a context of austerity and global slump.

Meanwhile, in downtown Athens these days, as darkness descends, buses full of riot police take up positions near the city center. Knowing that austerity means suffering for the majority, our rulers rightly fear that this majority might at any time pour into the streets. Whether the mass protest they fear will reach the scale required to defeat the austerity agenda is the burning political question of our moment. •

This article first appeared on his blog.