Anti-government protests have continued for more than a month in a dozen towns across Croatia. The largest have been in the capital, Zagreb, which have gathered more than 10,000 people at a time. When the regularity of protests – every second day at the beginning and now twice a week – and the fluctuation of participants are taken into account, it is possible to estimate the total number of protesters at more than 50,000 in Zagreb only. Polls show a 70 per cent support from the population for the protests and the calls for government resignation.

The protests are not organized by the political parties or unions, the latter already fully discredited by their politics of “social dialogue”; they are simply lead by all who participate. The decisions are made directly at the protests, and all attempts of various aspirants and wannabe politicians to take over the leadership or act as spokespersons have been instantly disqualified and discredited by prompt reactions of the majority of protesters. Protests are organized as a march across the city centre directed at seats of various fractions of the political and economic elites ruling the country – political parties, the ruling coalition as well as the opposition, private and public media, Croatian Central Bank (Hrvatska Narodna Banka), corporations, trade unions and state and public institutions.

Although the protests nominally aim to overthrow the current government, already shaken by a number of corruption scandals, including the arrest of the former prime minister, the route walked by the protesters, slogans they shout and the banners they carry point to a higher degree of political articulation than a whimsical involvement in the charade that elections have been: the peoples’ demands to participate directly in decision making and to democratize the economic sphere; opposition to privatization processes – those carried out as well as those announced; struggles to protect the public interest; the relentless discrediting of all political parties and the present party system as a model of governance; and opposition to Croatian accession to European Union.

The Crisis in Croatia

Although the emergence of protests was organizationally unexpected and their development fully contingent, their success and continuity seems no accident when the current state of the Croatian politics and economy is taken into account. The global economic crisis severely harmed the Croatian economy. But, it is necessary to add, it only intensified and exacerbated a crisis which has been around for thirty years. The severity of the situation is best illustrated by figures – unemployment is at 19.6%; GDP fell by 5.6% in 2009 and again by 1.5% in 2010; and foreign debt is at 97.8% of GDP. The figures indicate not only the crisis spilling over, but a long stagnation sequence which started in 1980s and was only briefly interrupted by a housing boom and a major rise in consumer credit between 2003 and 2008.

In the nominally socialist 1980s, Yugoslavia took a neoliberal turn that was already clear in the gradual change of the economic structure. At the end of the decade, according to Peter Gowan, it was one of the stations on Jeffrey Sachs‘ tour across Eastern Europe, which brought the adoption of IMF structural adjustment policies. This mean introducing, for example, new regulation of businesses which instantly destroyed 600,000 jobs and left half a million employed without pay, serving a double aim. The policies fully delegitimized the socialist system and, paradoxically, pointed toward a solution in the form of a widening range of capitalist reforms and incited nationalist ideologies leading to a civil war. Narratives of primitive accumulation, which was legally established as the transformation of social to state and finally private ownership, generated by ideological short circuits of the emerging ruling class, still serve as the key distraction in articulating sensible left politics in Croatia.

The transition process fully implemented the provisions of the Washington consensus, forming a deindustrialized economy fully dependent on imports, prompted by currency appreciation and expenditure sustained by consumer credit provided by almost completely foreign-owned banks, with an ever growing non-sustainable debt blocking potential anti-recession politics, privatization of key state resources and companies like telecoms and energy giants, gentrification and gradual liquidation and privatization of public services such as health and education. In short, a blatant example of what David Harvey has termed ‘accumulation by dispossession.’

The ideological narratives formed within the opposition of nationalism and liberalism, built around war crimes, national issues and human rights rendered the process of capitalist restoration in Croatia apolitical. The ruling nationalists legitimized the inevitability of the process with a clear caesura from the demonized socialist project and the necessary nationalist awakening while the liberals drew lines of continuity between socialism and nationalism by detecting a common collective mentality closely connected to colonial ideas on backwardness of the Balkans separating Croatia (and the rest) from Western Europe. After the 1990s, the opposition was relaxed within an almost complete consolidation of positions of the two major parties – Croatian Democratic Union (center right), currently in power, and the Socialist Democratic Party (center left). The ideological field thus formed treated the liberal option as the radical left and hence prevented any political articulation of the detrimental effects of the capitalist restoration in Croatia. But, in the past couple of years things have slowly started to change.

The protests across Croatia have for the first time rendered political what was the key vehicle of amortizing negative effects of the economic decisions of the past two decades – the European Union (EU). Until now, the discussions on the EU accession were shaped by the parliamentary consensus on the EU as a civilization accomplishment and the right-wing theories of conspiracy and loss of national identity. Croatia is currently in the final stage of pre-accession negotiations and the referendum on accession is expected by the end of the year. Key decisions have been made on expense of the people, favouring capital, and with readily visible consequences justified by the necessity of accession, the magical moment when everything will be transformed to welfare for all. Negotiations on the accession and acceptance of the demands of the EU are taking place without an even nominal public discussion; their legitimacy is based solely on the idea of EU as an ahistoric paradise of democracy and economic welfare.

The protests and the connected commentaries and articulations have for the first time introduced to mainstream discussions the concrete political and economic establishment of the EU, its history, the current crisis of the monetary union and the austerity measures following it, making them a legitimate subject of analysis outside the nationalist paranoia. The current polls show the opposition to EU accession to be at its highest – there is almost the same number of those who are against it and those who support it. Practically all parliamentary parties consensually accept and promote EU accession as the ultimate political telos which is not to be disturbed, no matter the consequences. The discrepancies between the attitudes of the people and those representing them might be the best indicator of the logic of the current protests.

Changing the Field of Politics

Mainstream analysts and commentators in Croatia mostly criticize the protests because of their lack of articulation and a disoriented conglomerate of demands. The observations are based on the fallacy of presupposing a homogenous protesting political subject and the logic of limits of political articulation which takes the party organization as the only organ for articulation of a relevant political stance. The crucial demand of the protesters is changing the very field of political communication, the legitimate positions of enunciation and the conditions of evaluating the articulateness. And the key point here is the direct connection of these struggles to the concrete material conditions and economic circumstances.

This is not an ideologically homogenous political subject but a wider popular front representing a wide range of class positions, ideological tendencies, contradictions that work within and degrees of radicalization. They are all connected by full discrediting of the political and economic elites and the awareness of the necessity of directly democratic decision-making on issues of common interest. It is difficult to forecast the duration of the protests and their immediate effects, but their achievements are already visible, as well as the irreversible process they are a part of. The capitalist structure of production, the European Union and the representative democracy are no longer widely accepted forms of political organization and their critique has become a legitimate political stance and a relevant attitude in the public sphere.

The irreversible process of changing social relations in Croatia was started two years ago by the student movement and the country-wide university occupations directed against the commercialization of education, currently intensified by new draft legislation, and was continued by the anti-gentrification struggles also spreading across the country. The protests are a part of this process, a further step in the articulation of peoples’ interests against capital, and surely not the last one. •

Translated from the original Croatian by Ruza Luksic. 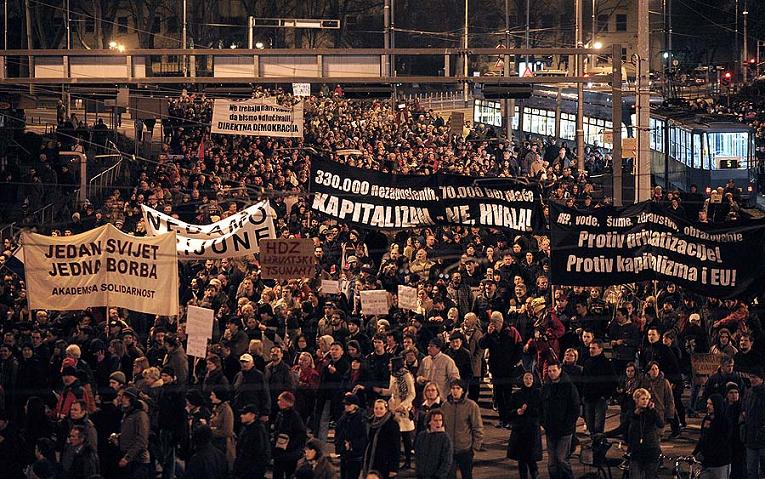 Marko Kostanic is a dramaturgist and political activist from Zagreb., Croatia.