On Feb 1, 2011 in a remark on the riots of the Egyptians Obama stated, “Now, it is not the role of any other country to determine Egypt’s leaders. Only the Egyptian people can do that.” This is the right position to take except that the actual role of the United States, and the Western counties in general, in the Middle East has been just the opposite. “We” – the dominant Western “we” – do believe in the freedom of every human being and all peoples of the world, but the problem is that “we” want them to be free in the ways we define freedom for them. 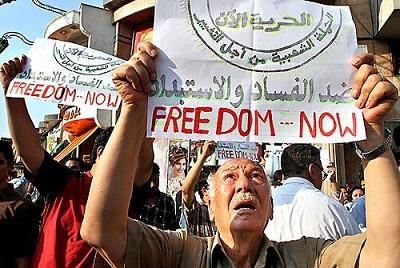 There are two common beliefs about the major problems of the Middle East: the first tends to blame the Western political and economic interventions in the region for everything that has been happening since the First World War; and the second one tends to accuse the “cultures” and the mentalities of the peoples of the Middle East for all the violence, despotism, tyranny, extremism, and corruption in the region. Both sides are, like any extreme opinion on a complex issue, equally wrong. The history of the region, like any other history, is too complicated to be explained by concentrating on a single factor. There are of course all kinds of factors, from ideological to purely economic, that have led to the Middle East that we know, or think we know. However, it is also true that the West has always intervened on the basis of Western interests. Those interests often meant supporting tyrannies like Hosni Mubarak until almost his last days on power. As long as a regime is a good ally of the West, it is supported regardless of conspicuous abuse of human rights on the part of that regime. The best example to think of is Saudi Arabia. The unfailing support provided to the Saudi regime by the United States government makes it clear that all the claims of human rights, women’s rights, democracy, and individual freedom have no weight in American foreign policy.

Saddam Hussein’s major crimes against humanity, including the genocide campaigns against the Kurds, took place in the 1980s when he was a close ally of the USA. In the 1980s the human rights discourse did not apply to Kurds in Iraq, as it does not apply to Kurds in Turkey now. American foreign policy has continually supported and maintained tyrannies and military rule in the Middle East. The question is: what about the will and power of the peoples of the Middle East? The answer so far has, for the most part, remained locked in the prisons of those totalitarian and fascist systems in the Middle East, but at the moment it is also on the streets of Egypt, and soon elsewhere. Now, it is a fundamental truth that the Egyptian people, like any other people in the world, aspire toward freedom. It must therefore be made clear, even to naive liberals, that freedom is not a value belonging only to the Western societies. It is not true that Egyptians, or any other people in the world, prefer to be enslaved. The fashionable discourse of multiculturalism wants us to believe that as much as we value freedom they have different cultural values which predispose them to “choose” to live under the rule of generals and imams.

There is some hope that the current uprisings in the Middle East will lead to an era of liberation not only from tyrannies but also from extremism, which takes its legitimacy from Western support of bloody generals who rule whole societies with iron fists. But this is predicated on the western powers not intervening in the freedom of the peoples of the Middle East. For freedom to flourish the West must understand that freedom is a universal value rather than a Western value. It is time for the West to comprehend the values of the Enlightenment, i.e. to be enlightened. No one values freedom more than those who are deprived of it. The Western liberal needs to be enlightened and ideologically liberated.1

But let us not be too naive. Western democracies, especially the USA, are too dependent on the Middle East to let it be (for example, the endless commodities at the heart of “our way of life” produced because of the guaranteed flow of middle eastern oil assured by dictatorships friendly to Western democracies). Thus, the best Middle East for the prosperous West is a “stable” and “well organized” Middle East which panders to the western world, and what else can keep such stability better than totalitarianism. Freedom is too risky for us when they have it. We cannot afford a free Middle East. In order for us to keep enjoying our prosperities, commodities, securities, and freedoms they must be governed by Mubaraks. Thus, only when another general is ready to take power can a dictator leave the stage. The collapse of the current order in the Middle East will inevitably mean the collapse of a whole reality in the West as well, including its so called “way of life.” •

February 11, 2011 — The Canadian Peace Alliance, the country’s largest network of peace and anti-war groups, congratulates the people of Egypt for their determined struggle against the dictatorship of Hosni Mubarak.

Earlier today, Foreign Affairs Minister Lawrence Cannon declined to comment on Mubarak’s resignation. Last week, Cannon went so far as to endorse Mubarak’s so-called “transition plan” which would have seen the dictator stay in power until September. With scenes of millions celebrating in the streets of Egypt, it’s telling that the Harper government keeps silent on this inspiring step toward democracy in Egypt.

For years, the Canadian government, backed the Mubarak dictatorship and supported its policy of enforcing the siege against the people of Gaza. Harper’s government has worried aloud about what this move toward democracy in Egypt will mean for the Israeli government and its occupation and siege.

Egypt, and before that Tunisia, has shown that people power can overcome dictators backed by foreign powers. And they have shown that democracy and liberation come from struggle from below, never from U.S.-led wars and occupations. This quote attributed to Abraham Lincoln captures well the dilemma that the revolution in Egypt presents for Harper and Cannon today, “Better to remain silent and be thought a fool than to speak out and remove all doubt.”

Stephen Harper has shown himself to be an opponent of democracy in Canada and abroad. His ongoing support for the corrupt regime in Afghanistan, against the wishes of the people there, proves he is on the wrong side of history. The Canadian Peace Alliance will continue to call for an end to Harper’s support for dictatorships around the world. •

Saladdin Ahmed is an O'Donnell Visiting Assistant Professor at Whitman College, cross-appointed in the Politics Department and Race and Ethnic Studies. His research interests include critical theory, the new-racism and ideology critique.