‘Climate Capitalism’ Won At Cancun – Everyone Else Loses

The December 11 closure of the 16th Conference of the Parties – the global climate summit – in balmy Cancun, Mexico was portrayed by most participants and mainstream journalists as a victory, a ‘step forward.’ Bragged U.S. State Department lead negotiator Todd Stern, “Ideas that were first of all, skeletal last year, and not approved, are now approved and elaborated.”

The elites’ positive spin is based on reaching an international consensus (though Bolivia formally dissented) and establishing instruments to manage the climate crisis using capitalist techniques. Cancun’s defenders argue that the last hours’ agreements include acknowledgements that emissions cuts must keep world temperature increases below 2°C, with consideration to be given to lowering the target to 1.5°C.

Negotiators also endorsed greater transparency about emissions, a Green Climate Fund led by the World Bank, introduction of forest-related investments, transfers of technology for renewable energy, capacity-building and a strategy for reaching legally-binding protocols in future. According to UN climate official Christiana Figueres, formerly a leading carbon trader, “Cancun has done its job. Nations have shown they can work together under a common roof, to reach consensus on a common cause.”

Status Quo or Step Back?

But look soberly at what was needed to reverse current warming and what was actually delivered. Negotiators in Cancun’s luxury Moon Palace hotel complex failed by any reasonable measure. As Bolivian President Evo Morales complained, “It’s easy for people in an air-conditioned room to continue with the policies of destruction of Mother Earth. We need instead to put ourselves in the shoes of families in Bolivia and worldwide that lack water and food and suffer misery and hunger. People here in Cancun have no idea what it is like to be a victim of climate change.” 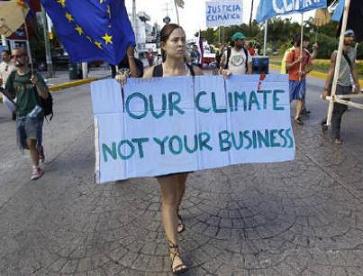 Most specialists agree that even if the unambitious Copenhagen and Cancun promises are kept (a big if), the result will be a cataclysmic 4-5°C rise in temperature over this century, and if they are not, 7°C is likely. Even with a rise of 2°C, scientists generally agree, small islands will sink, Andean and Himalayan glaciers will melt, coastal areas such as much of Bangladesh and many port cities will drown, and Africa will dry out – or in some places flood – so much that nine of ten peasants will not survive.

The politicians and officials have been warned of this often enough by climate scientists, but are beholden to powerful business interests which are lined up to either promote climate denialism, or to generate national-versus-national negotiating blocs destined to fail in their race to gain most emission rights. As a result, in spite of a bandaid set of agreements, the distance between negotiators and the masses of people and the planet grew larger not smaller over the last two weeks.

To illustrate, smaller governments were “bullied, hustled around, lured with petty bribes, called names and coerced into accepting the games of the rich and emerging-rich nations,” says Soumya Dutta of the South Asian Dialogues on Ecological Democracy. “Many debt-ridden small African nations are seeing the money that they might get through the scheming designs of Reduced Emissions from Deforestation and forest Degradation (REDD), and have capitulated under the attack of this REDD brigade. It’s a win-win situation, both for the rich nations, as well as for the rich of the poor nations. The real poor are a burden in any case, to be kept at arms length – if not further.”

Besides Bolivian leadership, the world’s best hope for contestation of these power relationships rests with civil society. Along with La Via Campesina network of peasant organizations, which attracted a Mexico-wide caravan and staged a militant march that nearly reached the airport access road on the morning of December 7 as heads of state flew into Cancun, the most visible poor peoples’ representatives were from the Indigenous Environmental Network (IEN). On December 8, IEN spokesperson Tom Goldtooth was denied entry to the UN forum due to his high-profile role in non-violent protests.

According to Goldtooth, Cancun’s ‘betrayal’ is “the consequence of an ongoing U.S. diplomatic offensive of backroom deals, arm-twisting and bribery that targeted nations in opposition to the Copenhagen Accord.” For Goldtooth, an ardent opponent of REDD, “Such strategies have already proved fruitless and have been shown to violate human and Indigenous rights. The agreements implicitly promote carbon markets, offsets, unproven technologies, and land grabs – anything but a commitment to real emissions reductions. Language ‘noting’ rights is exclusively in the context of market mechanisms, while failing to guarantee safeguards for the rights of peoples and communities, women and youth.”

In the same way, the Green Fund was promoted by World Bank president Robert Zoellick, whose highest-profile speech to a side conference promised to extend the REDD commodification principle to broader sectors of agriculture and even charismatic animals like tigers, in alliance with Russian leader Vladimir Putin. On December 8, protests demanded that the World Bank be evicted from climate financing, in part because under Zoellick the institution’s annual fossil fuel investments rose from $1.6-billion to $6.3-billion, and in part because the Bank promotes export-led growth, resource extraction, energy privatization and carbon markets with unshaken neoliberal dogma.

According to Grace Garcia from Friends of the Earth Costa Rica, “Only a gang of lunatics would think it is a good idea to invite the World Bank to receive climate funds, with their long-standing track-record of financing the world’s dirtiest projects and imposition of death-sentencing conditionalities on our peoples.”

Unfortunately, however, some indigenous people’s groups and Third World NGOs do buy into REDD, and well-funded Northern allies such as the market-oriented Environmental Defense Fund have been using divide-and-conquer tactics to widen the gaps. The danger this presents is extreme, because the Clean Development Mechanism (CDM) strategy set in place by Al Gore in 1997 – when he mistakenly (and self-interestedly) promised that the U.S. would endorse the Kyoto Protocol if carbon trading was central to the deal – may well continue to fracture climate advocacy.

REDD is one of several blackmail tactics from the North, by which small sums are paid for projects such as tree-planting or forest conservation management. In some cases, as well as through CDMs such as methane-extraction from landfills, these projects result in displacement of local residents or, in the case of Durban’s main CDM, the ongoing operation of a vast, environmentally-racist dump in the black neighbourhood of Bisasar Road, instead of its closure. Then the Northern corporations which buy the emissions credits can continue business-as-usual without making the major changes needed to solve the crisis.

Many critics of REDD and other CDMs put the idea of Climate Debt at the core of a replacement financing framework. They demand that the carbon markets be decommissioned, because their fatal flaws include rising levels of corruption, periodic chaotic volatility, and extremely low prices inadequate to attract investment capital into renewable energy and more efficient transport.

Having spent an afternoon at Cancun debating these points with the world’s leading carbon traders, I’m more convinced that the markets need closure so we can advance much more effective, efficient command-and-control systems. These worked well in the ozone hole emergency, when CFCs were banned by the Montreal Protocol starting in 1996. The U.S. Environmental Protection Agency now has command-and-control power over GreenHouseGas emissions, and administrator Lisa Jackson can alert around 10,000 major CO2 point sources that they must start cutting back immediately.

But without more protest against the Agency, as pioneered by West Virginians demanding a halt to mountaintop coal removal, Jackson has said that she will only begin this process in 2013 (after Obama’s reelection campaign). On the bright side, IETA’s lead Washington official, David Hunter, confirmed to me that the U.S. carbon markets were in the doldrums because of the Senate’s failure to pass cap-and-trade legislation this year. Thank goodness for Washington gridlock.

However, Washington’s Big Green groups have admitted that they pumped $300-million of foundation money into advocacy for congressional carbon trading, in spite of Climate Justice Now! members’ campaigning against this approach. Critique has included the film “The story of cap and trade” (www.storyofstuff.org), which over the past year had three quarters of a million views. The vast waste of money corresponded to a resource drought at the base.

In October, three well-resourced environmental groups – 350.org, Rainforest Action Network and Greenpeace – concluded that more direct action would be needed. It’s happening already, of course. Two dozen U.S. groups, including IEN, Grassroots Global Justice and Movement Generation, argued in an October 23 open letter that “Frontline communities, using grassroots, network-based, and actions-led strategies around the country have had considerable success fighting climate-polluting industries in recent years, with far less resources than the large environmental groups in Washington, D.C. These initiatives have prevented a massive amount of new industrial carbon from coming on board.”

Climate Justice Instead of Climate Capitalism

But by all accounts, one reason the climate capitalist fantasy moved ahead at Cancun so decisively was the fragmented nature of this kind of resistance. Crucial ideological and geographical divides were evident within Mexico’s progressive forces, a problem which must be avoided in the coming period as the healing of divisions over market-related strategies proceeds. Grassroots activists are unimpressed by Cancun’s last-gasp attempt at climate-capitalist revivalism.

Indeed, the limited prospects for elite environmental management of this crisis confirm how badly a coherent alternative is needed. Fortunately, the People’s Agreement of Cochabamba emerged in April from a consultative meeting that drew 35,000 mainly civil society activists. The Cochabamba conference call includes:

The analysis behind these demands has been worked out over the past few years. But now the challenge for climate justice movements across the world is to not only continue – and dramatically ratchet up – vibrant grassroots activism against major fossil fuel emissions and extraction sites, ranging from Alberta’s tar sands to the Ecuadoran Amazon to San Francisco refineries to the Niger Delta to West Virginia mountains to the Australian and South African coalfields. In addition, if Cancun revives financial markets for the purposes of Northern manipulation of the climate debate, then Goldtooth’s warning is more urgent: “Industrialized nations, big business and unethical companies like Goldman Sachs will profit handsomely from the Cancun Agreements while our people die.”

Durban will offer the next big showdown between unworkable capitalist strategies on the one hand, and the interests of the masses of people and the planet’s environment. The latter have witnessed long histories of eco-social mobilization, such as the 2001 World Conference Against Racism which attracted a protest of 15,000 against Zionism and the UN’s failure to put reparations for slavey, colonialism and apartheid on the agenda.

It will be a challenge to maintain pressure against REDD and the carbon markets, but by next November it should be clear that neither will deliver the goods. Hence, as versed by Friends of the Earth International chair and Niger Delta activist Nnimmo Bassey, a winner of the Right Livelihood Award this year: