Last weekend in Ireland, thousands of people demonstrated against austerity measures and against bearing the burden of the Irish crisis. Just how did the Irish miracle turn into the Irish nightmare? Paul Jay of The Real News Network recently interviewed Leo Panitch. Panitch is a distinguished research professor at York University, teaches political science there, and he’s the author (with Greg Albo and Sam Gindin) of the book In and Out of Crisis: The Global Financial Meltdown and Left Alternatives.

Paul Jay: So, in your view, how do we get from this miracle economy of Ireland with so low unemployment, and apparently a booming middle class, to bust? 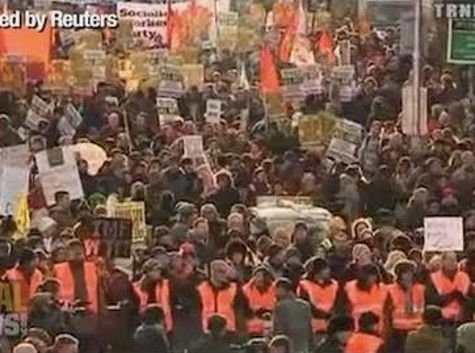 Leo Panitch: Well, we got to it via the bust of the financial sector that Ireland certainly didn’t cause. It was very much a American-made crisis. But insofar as a good part of the Irish boom involved Irish Banks borrowing short in order to lend long to their property boom, and to some extent to lend to foreign investors who were creating jobs, a lot of them American companies but borrowing from Irish Banks, the result of that when the financial boom ended in the United States was that the knock-on effect meant that Irish banks were virtually bankrupt. And one of the first places on the face of the earth that that was felt apart from Iceland was Ireland, and the Irish government immediately guaranteed all bank deposits. And insofar as they did so, they socialized, took onto the public shoulders the private debt of the banks. And you see the consequences.

JAY: So people are saying what happened is the banks bet, helped create a real estate bubble in Ireland. They bet on it, they lost the bets, and now the Irish people are being asked to bail them out. Is that a fair characterization?

JAY: Paul Krugman wrote a piece recently where he compares what happened in Ireland to Iceland, where he said Iceland took a different approach toward a somewhat similar situation. What do you make of that?

PANITCH: Yeah. They tried to make the Dutch and the British bear some of the burden and came under a lot of pressure from the Dutch and the British for this and had to compromise somewhat, but they did spread it around a little. But you shouldn’t think that the Icelandic people haven’t had to carry most of that burden they have. Now, I must say, this is now a larger situation. And when the Germans, who always do this, since they never want to take responsibility for this themselves, it always falls more on the American state to organize the bailout. The Germans said that in the future, beginning in 2013, the banks ought to be taking some of the haircut themselves, rather than have the EU states lend – or the IMF or the Americans – lend the Irish state the money, provided they engage in this terrible austerity program. And as soon as the German banks heard that, and not only the German banks, they all the more wouldn’t lend money to Ireland, because they didn’t want to be caught holding Irish debt if they were going to be the ones who would have to take any of the haircut for this.

PANITCH: That’s the situation, and there’s nothing new about this.

JAY: Brilliant system. So what are Irish people demanding? What do you think they should be? What’s the alternative for Ireland?

PANITCH: You know, the austerity program involves raising the sales tax – the value added tax, as it’s called there – to 23 per cent (look at the hysteria here in Canada when we have a combined sales tax of 15 per cent), that at a time when corporate taxes in Ireland are famously at 12 per cent and it is being pledged that they will not be raised. And I might point out that the American corporations that have been the largest investors in Ireland in terms of manufacturing investment and exports from Ireland are threatening they’ll pull out unless this 12 per cent corporate tax is maintained. So you see the enormous class inequity that’s built into this, the enormous demonstrations that have taken place in Ireland. And they’re not new. They occurred last year when austerity measures were introduced as well, and being led by a very, very moderate corporatist trade union leadership, which doesn’t want to engage in any class mobilization – less radical than the AFL-CIO, but they’re being forced into undertaking these demonstrations by virtue of the anger of the people. They’re not demanding nearly enough. It’s a very, very defensive set of demands they’re engaged in. As I’ve argued before, the only real solution here is for Ireland to lead the way by defaulting on the debt, to do what Argentina did at the beginning of this century. But that will mean, and I hope it will mean, a much more radical set of responses in Europe, not only in Spain and Portugal and Greece, but much more broadly, whereby people are given a lead in terms of not just socializing the private banks’ bad debts but actually nationalizing the banking system and turning it into a public utility. It’ll mean breaking up the European Union, but reconstructing it on a basis of democratic and cooperative economic planning, where the money, our money that passes through the banking system, the people’s money, is actually allocated in a democratic way. That – we have had a banker’s Europe, a Europe based on free capital flows. It is inevitably one that was highly volatile, inevitably producing one crisis after another. And Ireland is facing the brunt of it at the moment. Greece faced it a few months ago. Portugal’s about to face it at all.

JAY: But what do you make of the argument that the reason these countries are in difficulty is ’cause there’s too much entitlement programs, the pension age is too low, unemployment insurance is too high, and so on?

PANITCH: I think it’s ludicrous. This isn’t the problem. The problem is not that Irish workers are too well off. The problem is the enormous wealth inequality, and above all inequality in power, and irrational investment that has gone on in these countries. And it will mean, if people are going to try to maintain something like the civilization that we’ve known, it’ll mean redefining what our standard of living is. It will mean that we will not be able to engage in the kind of individual consumption, and have to turn to the kind of collective services that would be so rational and so needed – much more, much more extensive public transit and freer public transit, rather than private transit through automobiles that reproduces the ecological crisis and worsens it. But the answer is not that, you know, the Irish working-class (give me a break) is so well off and wealthy, much less the Greek one. Now, it’s true that many of these states are corrupt and are indeed the kinds of states that are built on clientalism. The type of democracies we’ve had there, the types of capitalist democracies we’ve had there, have involved bribing people, bribing people to – through agreeing to let them not pay as much taxes or any taxes, through giving them kickbacks, etc.

PANITCH: Yes, and engaging in the type of relationships between politicians and capitalists that are indeed very, very unsavory, which involve, if not corruption, certainly scratching your back if you scratch mine. So there’s no sense pretending that these have been, you know, wonderful democratic societies. And when one’s calling for a different kind of economy, one needs to call for a different kind of state. •