On November 11, Remembrance Day, Canada’s prime minister Stephen Harper announced that his government has unilaterally decided, without even a debate or vote in Parliament, to extend Canada’s military “mission” in Afghanistan for three more years, until 2014. It subsequently joined in a unanimous decision of the North Atlantic Treaty Organization (NATO) at a summit meeting in Portugal to prolong NATO’s murderous occupation of that country for at least another four years. The move would see the Canadian military presence, currently close to 3,000 troops, reduced to about 1,000 by July of next year.

The decision has fueled debate over a war that is increasingly unpopular, not least because it is a snub to those Canadians who took Parliament for its word when it voted in 2008 that Canada would withdraw its soldiers from Afghanistan by July 2011. That deadline was aimed at deflecting growing disaffection with the war. 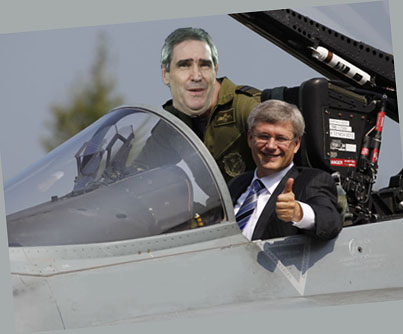 In a new attempt this time to disarm anti-war critics, the Harper government is arguing that Canada’s renewed military contingent will be confined to “training” Afghan police and military. Full-scale combat by Canadians will end, we’re told. Harper failed to explain why – some 10 years after Western military forces toppled the previous government – the Afghan military still needs further training. Some 30 per cent of those trained are reported to defect, many of them taking their weapons to join the growing Afghan resistance to the NATO occupation.

Harper said there was no need for a vote in Parliament because the decision is consistent with the “spirit” of Canada’s original decision to go to war and he has the support of the largest opposition party, the Liberals. In fact, Liberal leader Michael Ignatieff and Liberal foreign affairs critic Bob Rae have been publicly urging Harper for some time to extend the mission.

The two other opposition parties, the Bloc Québécois and New Democratic Party, oppose the extension. The Bloc has moved a motion, to be voted in the House of Commons on November 30, that condemns the decision to “unilaterally” extend the military mission. As the motion states, the unilateral decision violates the promise “that any military deployment would be subject to a vote in Parliament.”

The resolution sparked a rare, lengthy debate on Afghanistan in the House on November 25. However, regardless of its outcome, it is clear that the government now has the votes it needs to endorse its decision to extend the Afghan troop deployment. Liberal leader Ignatieff agrees with Harper that a vote in Parliament is not required to extend the mission. And although there are rumours of divisions within the party over the extension, Ignatieff has enough support to give Harper his majority.

Canada was leaned on heavily by its NATO allies to scrap the 2011 exit date. The Obama administration has been trying to lull the people of the United States and the rest of the world into believing it has an “exit strategy” from Afghanistan that consists of placing Afghan allies in the lead role of a counter-insurgency war with no defined goal or foreseeable end.

A key part of selling the military extension is the ruse that Canadian troops will largely remain “behind the wire” of their military compounds. However, a different story is emerging from news reports.

An anonymous government official told the Globe and Mail on November 16 that Canadian soldiers will be posted not only to the relative safe area of Kabul, but to other parts of the country as well. The U.S. and NATO say that “trainers” will be posted everywhere in the country.

Edmund Whiteside, NATO Council Secretary, told an audience at Concordia University in Montreal on October 25 that “Afghanistan will be a very long military venture.”

In the Vancouver weekly Georgia Straight, CPA co-chair Derrick O’Keefe charged that Liberal leader Michael Ignatieff is responsible for the prolongation of the Afghanistan adventure. “You can actually fault Ignatieff and the Liberals more (than the Conservative government) because they have been publicly advocating for this war for some time.”

Scott Taylor, a former Canadian soldier and publisher of Esprit de Corps magazine, told CBC’s The Current on November 15 there is “no hint of optimism” in the government’s pronouncements that the new mission would be completed by 2014.

When asked what role “training” troops could play in Afghanistan, he replied, “I am against us leaving soldiers there in the first place… The things we could be doing, with a little creativity and recruiting of Afghan Canadians… is training Afghans to become plumbers, electricians, masons, anything that would begin to rebuild or build that country.”

Taylor has produced a one-hour documentary film that premiered on CPAC television on November 21 titled, “Afghanistan: Outside the Wire.” In it, he says that Afghan lives are largely untouched by the billions of dollars in aid money that have poured into the country. Aid programs have “largely failed” the Afghan people.

Canada’s rulers are deeply committed to militarism and war. The country’s two national daily newspapers back the course strongly. The Globe and Mail ran a week-long series of articles in October extolling Canada’s new Afghanistan-earned military capacity. The thrust of the series is that Canada now has a model battle-tested army that can and should be used to wage war around the world.

The support by the Liberals to this latest decision places new strains on those who have looked to a political alliance between the Liberals and the New Democratic Party to unseat the government.

In 2008 the two parties, with Bloc Québécois support, agreed to form a coalition that would defeat the Harper Conservatives and form a government. At the time, the NDP agreed to set aside its opposition to the “combat mission” in Afghanistan should the coalition find itself in government. The agreement was scuttled when the Liberals elected a new leader, Michael Ignatieff.

In the lead-up to announcement of the new mission extension, Conservatives and Liberals quietly maneuvered to stifle growing public debate over reports that Canadian troops knowingly transferred captured Afghan resistance fighters and suspected insurgents to Canada’s Afghan allies in full knowledge that they faced probable torture.

The two parties have buried a Parliamentary examination of the issue under an avalanche of procedure, paperwork and outright stonewalling.

In a sign of the limits of the Bloc’s anti-war stance, the party voted on November 23 against a Liberal motion to cancel the government’s decision to spend $16-billion-plus on new F35 fighter jets – the largest single purchase in Canadian government history, also decided without a vote in Parliament. The motion was defeated by the votes of Tory MPs, supported by the Bloc. Its leader, Gilles Duceppe, argued that the important thing was not to cancel the contract but to guarantee that Quebec receive its fair share of the economic spin-offs!

In the Parliamentary debate on November 25, Bloc Québécois and NDP MPs, while critical of the extension, praised the role of Canada’s military in Afghanistan and said a “civilian” mission should be put in place that would assist the Afghan government with policing and oversee the spending of aid and development money.

Both parties are short on specifics of what such a mission would look like and how it could operate in the midst of an ongoing war. None of the MPs of either party who spoke in the debate called for an end to the NATO-led war or a withdrawal of foreign military occupation forces.

There have been scattered demonstrations against the extension of the military mission in a number of cities. In Montréal, the anti-war coalition Échec à la Guerre (Stop War) held a “People’s Summit Against War and Militarism” on the weekend of November 19-21, attended by more than 200 people. It issued a strong statement signed by 70 organizations denouncing Canada’s participation in “a war of occupation in Afghanistan” and the militarization of Canadian foreign and domestic policy.

And a 10-city speaking tour of Canada by British anti-war activist George Galloway, which coincided with the extension announcement, drew audiences in the thousands. Galloway is a former British MP who was kicked out of the Labour Party for his opposition to the war in Iraq while the party was in government and directing Britain’s role in that bloody conflict. He is also an outspoken opponent of the war in Afghanistan and a strong supporter of the struggle of the Palestinian people.

Galloway was banned from entering Canada in March 2009 because the Canadian government hates his views on the never-ending war against the Palestinian people. He challenged the ban in Federal Court earlier this year and won the right to enter the country.

A right-wing campaign sprang up against the speaking tour, seeking to block it from taking place or at least minimize its impact. It failed miserably. Galloway is suing the federal government and its Minister of Immigration for the 2009 ban. He promises that every penny awarded, if he is successful, will be dedicated to building a stronger anti-war movement in Canada.

Former Afghan MP and social activist Malalai Joya completed a successful four-city speaking tour of Canada in early October. She addressed large audiences in Calgary, Ottawa, Toronto, and Vancouver. The tour included a press conference at the Parliamentary Press Gallery and a thirty minute interview on the prestigious CBC national television program, Mansbridge One on One.

Joya told host Peter Mansbridge that “For nine years, [Canada] has followed the wrong policy of the U.S., which is not only a mockery of democracy and war on terror, to tell you better, it is just a war crime.”

The public debate that has opened up in Canada on the extension of the war mission in Afghanistan opens new and unprecedented opportunities to mobilize Canadians in demanding that all Canadian and foreign troops leave Afghanistan. This is the starting point of any effort to repay the people there for the terrible destruction that has befallen them at the hands of the U.S., Canada and their other warmaking allies. •

Tim Kennelly is an activist in Vancouver in the peace movement and on Palestinian solidarity.