In the past year Amir Khadir, Québec Solidaire’s first elected MNA (Member of the National Assembly), has become one of Quebec’s most popular personalities. He has won plaudits from all observers and more importantly, from the public for his performance in and out of the Quebec parliament. His widely publicized positions denouncing political corruption among the ruling Liberals, supporting the battles against the government’s spring austerity budget or lambasting mining and pharmaceutical corporations, have won him a growing recognition among working people and the wider public.

A recently released poll confirmed Khadir as the second most popular political personality in Quebec with an approval rating of 50%, putting him ahead of the sovereignist Parti Québécois’s Pauline Marois, and a whopping 26% in front of Liberal Premier Jean Charest. Commenting on the results, pollster Christian Bourque, said:

“Khadir has become a star of Quebec politics. It is surprising for a party with just one elected official and such a limited speaking time in the National assembly. But he has the ability to broadcast his message very effectively on both television and the radio. He is fast becoming the second official opposition all by himself.”1

Not surprisingly, Québec Solidaire (QS) is now credited with a steady 8% to 10% in the polls, more than twice its result in the general elections of 2008.

It is in this climate of rising sympathy for Québec Solidaire that the Parti Québécois (PQ) pulled a surprising move earlier this spring. At a meeting of the party’s leading bodies, Pauline Marois, hit out at a mildly left ‘political club’ inside the party called Syndicalistes et Progressistes pour un Québec Libre, known by its acronym SPQ Libre. She removed their label of a ‘recognized political club inside the party’ and abolished their token representation in the PQ’s National Council. To add insult to injury, Marois herself a former member of SPQ Libre, called on the party to “finally modernize its program” by recognizing that “individual Quebecers, not the state, should henceforth be the driving force in Quebec wealth creation.” She thus cast away one of the PQ’s most cherished “social-democratic” shibboleths.2

SPQ Libre, made-up of some high-profile labour activists (Marc Laviolette, the former President of the Confédération des Syndicats Nationaux (CSN) labour central, for one) and financed by a few unions, had claimed since 2004 to represent labour and social democracy within the PQ. While not amounting to much inside the party, the SPQ Libre candidate in the 2005 PQ leadership race had merely garnered a paltry 1.22%, the club did act as the interface with a section of the labour leadership and played an important symbolic role.

The negative fall-out was swift and massive. Jean-Pierre Fortin, Quebec director of CAW, an early powerful backer of SPQ Libre and Vice President of the Quebec Federation of Labour (Quebec’s main labour central with half-a-million members), publicly vented his disappointment. Noting that he was “the only Vice President of the QFL to have openly supported the PQ in the last elections” he sternly added that this shift to the right “will likely cause the PQ to lose some of its most dynamic and mobilizing elements.”3 Amir and the QS leadership reacted just as swiftly declaring that “the PQ has now definitively shifed to the right” and welcomed all those who wanted to join the ranks of the left-wing party.

As a result many local and middle-level labour leaders angered by the Parti Québécois’ open snub have come closer or joined Québec Solidaire. Some have chosen to appear publicly at QS functions.

The earliest example occurred the very same weekend that SPQ Libre was being drummed out of the PQ. At a public meeting held in Longueuil, Montreal’s south shore, Régine Laurent, head of the Quebec-wide nurses union, pointedly remarked “it is time that Quebec labour drops its long-standing policy of neutrality and opts to support its real friends.” Amir was a guest at the same public event. Another striking example was provided by Francine Levesque, head of Quebec’s largest health sector union, the Fédération de la santé et des services sociaux (FSSS), the biggest single affiliate of the CSN with 108,000 members. She appeared at a QS function in Amir’s riding and openly thanked him and Québec Solidaire for being “the only MNA and party that are standing shoulder to shoulder with the Public Sector Union Common Front in our negotiations with the government.”

Yet another occurred at the recently held 34th convention of the Montreal Labour Council of the CSN. Amir Khadir received a tumultuous standing ovation after being introduced by the local leader, Gaétan Chateauneuf, “as our candidate since 2003.” It dwarfed the lukewarm reception afforded to former leaders of the labour council, Gérald Larose and Pierre Paquette, who are now solidly identified respectively with the PQ or the Bloc Québécois. The CSN’s Montreal Labour Council with 90,000 members has officially supported Amir in his last three election campaigns despite the CSN’s top leadership prolonged flirt with the PQ. (The CSN is Quebec’s second biggest central with some 350,000 members.)

As a result of this latest swing to the right, the PQ’s social democratic veneer lays in tatters, its neoliberal character more exposed than ever. Labour support is becoming muted and many activists are casting an eye toward Québec Solidaire.

Where can QS be situated on the political and ideological map? Québec Solidaire is essentially a “political united front” of various left and radical trends opposed to neoliberal and neoconservative policies. So far, it has abstained from rejecting capitalism or calling for socialism. But its staunch denunciation of the PQ’s ‘neoliberalism with a social face’ puts it in direct opposition to many social democrats and their perpetual subservience to the ‘sovereignist’ PQ. 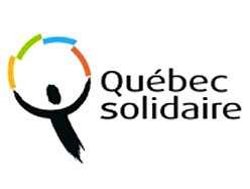 Some analysts have attempted to cast QS as a Quebec variant of western social democracy, but that is definitely not the case. The new party has integrated in its platform the main demands of the social movements and added a strong call for increased public ownership in clean energy production and the health sector. It is also anti-imperialist and anti-war, strongly opposed to Canada’s participation in the U.S./NATO war in Afghanistan. It is strongly supportive of the Palestinian people’s struggle and sympathetic toward the Latin American left governments.

Furthermore, it is steadily moving in its political practice toward the dual tactic of ‘the ballot box and the street.’ After granting an inordinate amount of attention to electoral work in its first two years, courtesy of back-to-back Quebec general elections in 2007 and 2008, QS is now actively supporting and participating in the rising social and labour battles erupting daily in the province. The party is also a highly vocal critic of the federal Tories. Significantly, Khadir was the first political personality in Quebec to denounce the police crackdown on the G20 demonstrators in Toronto this past June. In a highly public move, furiously denounced by some right-wing media pundits, he paid the bail for a well-known Quebec activist held in a Toronto jail after the demos.4

In its program and practice the new party is well to the left of any Western social democratic party, not to speak of the meek and mild Canadian New Democratic Party (NDP). As I have argued elsewhere, QS can be more properly understood as a “new left” formation, similar in nature to those that have appeared in several Western countries in the past decade. The best known cases being the Nouveau Parti Anticapitaliste (NPA) in France and Die Linke (The Left) in Germany.

The programmatic challenges facing QS also bear a striking similarity to those faced by the NPA and Die Linke. While the ‘anti’ aspect of the platform or program of these formations is well spelled-out, the ‘pro’ aspect is yet to be clearly defined. By their own admission, the socialism espoused by the NPA and Die Linke is kept somewhat vague at this stage of their development.

Public Discussions Ahead of 2011 Congress

As for Québec Solidaire, it has just begun to query the ‘post-neoliberal’ society it advocates. In its April 2009 manifesto, the question of the link between capitalism and neoliberalism is explicitly stated for the first time and the question posed openly: “Pour sortir de la crise: dépasser le capitalisme?” (To fight the crisis: should we go beyond capitalism?).

This question lies at the root of QS’s ongoing attempt to define its program. Following its recently held 5th congress centered on the National Question, the party is now tackling the socio-economic and environmental parts of the program. The preliminary documents put forth by the Political Commission are opening the door to an energetic discussion of anti-capitalism and ecosocialism:

“As we work on our program, we should spell out the nature and limits of the system, and ask ourselves the following question: isn’t the capitalist system, based as it is on maximizing profit and irresponsible exploitation of nature, the main obstacle to social progress and a healthy attitude to the environment? We need a serious debate on the question so we can determine whether our social problems can be corrected by reforms that respect the logic of the system or if we need to adopt the perspective of going beyond the system.”5

Internal debates and public discussions have already started in preparation of the next congress scheduled for February 2011. The process will be a highly public one with submissions sought from members and the public posted on the QS website and many open party educational conferences held throughout the fall. Discussions are kicking off in earnest during the last week of August with leaders and members of QS, as well as trade-unionists and social movement activists, attending and speaking at the ‘summer university’ of Nouveaux Cahiers du socialisme, a Quebec socialist review, and/or the ‘summer camp’ of Alternatives, an international solidarity organization. On the agenda are many conferences and workshops on such questions as ecosocialism, activating the fightback against the government austerity budget and building a climate justice movement.

It is a tricky question that the party membership must ponder as both Québec Solidaire’s electoral future and its anti-systemic aspirations are up for discussion. While some members are calling for maintaining the party’s “Rainbow Coalition” character, warning “that socialist sentiments have presently little popular appeal” and hence QS should set its sights “on immediate changes that can be realized within the framework of capitalism”;6 others argue instead that QS should take advantage of “favourable objective and subjective conditions“ to evolve “toward an anti-capitalist party acting within a broad-based movement against neoliberalism.”7

All QS members agree that the PQ’s definitive swing to the right “opens a window of opportunity for the constitution a broad political bloc of all those seeking political change.” The thorny question being, as always, how does a left-wing party move in to fill that void?

Quebec has a history of radical left activism as two recently published scholarly essays on the long suppressed history of 1960s and 1970s activism show.8 Keeping in mind the defeats and disappointments of the past, today’s new activists are much more keenly aware of the imperative of building a broad-based popular movement in order to obtain any success in the 21st century. •