The Ontario government has recently announced major changes to the way that it will pay for generic drugs for those covered under its public drug plan, primarily people 65 and over and those on social welfare. The aim is to rein in rapidly increasing costs for the Ontario Drug Benefit Program. Up until recently spending has been going up by more than 10% annually and overall across Canada drug costs are the second most expensive part of the health care system behind only hospitals.

The current government made a first attempt to deal with drug spending back in 2006 when it reduced the price for generic medicines from 70% of the brand name drug to 50%. At that time, $222-million in savings (from a drug bill of $3.5-billion) from reduced generic prices and other reforms was predicted. There was never any independent analysis about whether those anticipated savings were realized. Now faced with a deficit of over $20-billion and health care costs that take up 42 cents of every public dollar, the government is looking at a new initiative to rein in at least one segment of health care costs. The question of whether that 42-cent figure represents too much spending on health care or is mostly the product of a series of tax cuts that have reduced government revenue is a crucial issue that must be taken up soon.

The Politics of Generic Drugs

One of the key factors that makes public drug plans affordable is the existence of generic versions for many of the products that are on the provincial formulary. Generic drugs work the same as the original brand-name products but are much lower in cost since generic companies don’t incur the research and development expenditures and also don’t engage in costly promotion of their products. 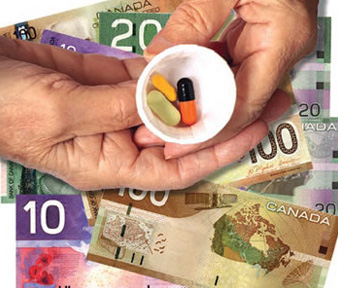 What the government is now proposing to do is to eliminate these discounts, also referred to as professional allowances. Savings from making this change are projected by the government to amount to $750-million annually which would be a substantial reduction in the annual $4.14-billion that the government spends on prescription medications.

The pharmacy owners, primarily the large chains such as Shoppers Drug Mart and Rexall are vigorously protesting this move. Their claim is that these discounts are necessary to make their businesses economically viable and that without the discounts they will have to cut services, close stores earlier and/or start charging for services that have been provided for free up until now such as home delivery.

Few people seem to have much sympathy for the large chains but the smaller independent stores are in a different situation. The large chains have become like supermarkets selling everything from books to telephones to cameras to groceries. Filling prescriptions is only a relatively small part of their business. However, typically the small independent stores focus on filling prescriptions and selling over-the-counter drugs and other drug related consumer products such as suntan lotion, toothpaste and the like. Losing the discounts could have serious consequences for them and for their patients especially if these stores are located in rural communities.

The government is not completely indifferent to what pharmacists are saying and has announced some relief for them. Dispensing fees for pharmacists in rural communities will go up $3 and in urban centres they will go up $1 amounting to about $100-million in total. The message from the groups speaking on behalf of pharmacies is that this is too little.

The dispensing fee is the payment that the government makes for the advice that pharmacists provide for their patients. Up until now the government has largely frozen the dispensing fee at its current level of under $7 for years. Dispensing fees for people paying out-of-pocket and for those with private drug insurance have not been regulated so by freezing public dispensing fees the government has in effect shifted that cost onto these two groups. This is especially troublesome for those without insurance who pay out-of-pocket since they tend to work at low wage non-unionized jobs and being at the lower end of the socioeconomic scale have more health problems and need more drugs. Freezing dispensing fees has also forced pharmacies owners to become more and more reliant on the discounts that they receive from the generic companies, the very thing that the government is now complaining about.

The Way Forward: Alternatives Not Considered

Part of the solution is to stop paying pharmacists for being storekeepers and start paying them for the knowledge that they gained from going to university for four years. Pharmacists have been trained to know about drugs and government should pay them to monitor patients for adverse effects from medications, to go over the drug regimens that people are on, particularly people in high risk groups such as the elderly and children, to spend time discussing the harms and benefits of drugs that people are taking. As provinces reform primary care they should be looking to move many pharmacists out of stores altogether and putting them down the hall from doctors. When the doctors write a prescription people can easily go to a pharmacist who has the time to spend with them and the knowledge to properly advice them.

There is little doubt that generic drug prices in Canada are significantly higher than in many other countries and lowering these prices makes sense. However, if governments want to go where the savings really are then they need to start taking aggressive action on brand-name prices. The average cost of a generic prescription in 2008 was $26 versus $66.50 for a brand-name drug. Of the $20-billion in revenue drug manufacturers receive, 70% goes to brand name drugs and only 30% to generic drugs. In 2007/08 two brand name drugs alone accounted for 10% of the total cost of Ontario’s drug plan.

Before looking at how high prices might be tackled it is worth briefly examining why prices are high in the first place. Drug companies claim that these prices are necessary so that they can recoup their investment in research and development and continue to develop new and better medications. At present the companies are touting a figure of at least $1-billion (U.S.) as what is needed to bring a new drug to market. However this number is heavily contested since it relies on an analysis of confidential data from companies reported to a research centre that gets 40% of its income in the form of unrestricted grants from multinational drug companies. Moreover, the $1-billion figure ignores the indirect subsidies that companies get through tax deductions on research spending. The only attempt to engage in an independent examination of industry information came during the 1970s and early 1980s when the General Accounting Office (GAO), the investigative arm of the U.S. Congress, sought financial data that would allow it to estimate research, development, marketing, promotion, and distribution costs for individual products. The drug companies objected on the grounds that the confidentiality of their cost and other data could not be protected. Ultimately the dispute went to the U.S. Supreme Court that ruled that the GAO was not authorized to collect this type of information.

On top of the question of how much money the industry spends on research and development is the actual value of the drugs that are marketed. Evidence from Canada and France indicates that at best about 15% of new drugs represent any significant therapeutic advantage over what already exists. While these drugs may be worth the prices that are being asked, the other 85% represent gravy for the industry and little to nothing for the public that takes them.

One way of bringing down prices is to use monopsony buying power, but right now Canada has 10 provincial, three territorial and four federal drug plans and no universal coverage. In contrast in Australia the national government covers all residents in the country for drug costs and is the only bargaining agent. As a result, brand name drug prices are about 9% lower in Australia than they are here. Having a single payer and extending public coverage to the entire population would put the government in a much stronger position vis-à-vis the drug companies.

One of the reasons why doctors switch from older, less expensive generic drugs to newer, more expensive but not necessarily any better or safer brand name drugs is the massive promotional campaigns that drug companies put on. In the year after the anti-inflammatory and analgesic Vioxx was launched Merck took out over 1000 pages of advertising in Canadian medical journals, company representatives paid 48,000 visits to the offices of Canadian doctors and left behind over 1,000,000 samples. (Less than five years later Vioxx was pulled from the market for safety reasons – a cautionary note about using new drugs.) The estimate is that companies spend between $2.4 and $4.8-billion annually here in pushing their drugs to doctors. While the Food and Drugs Act gives the federal government the power to regulate promotion it has consistently refused to exercise that power except on very rare occasions and has turned over the control of promotion to the drug companies. The results are not unexpected – a weak code of conduct enforced through a passive complaints mechanism with fines for violations that amount to little more than lunch money for the drug companies.

Back in the early 1990s, the government of New Zealand was looking at rapidly escalating drug costs. Its response was to create an agency, Pharmac, to manage the national drug budget. According to projections without Pharmac by 2009 the country would have been paying $1.6-billion per year, with Pharmac it was actually paying about $670-million. Steve Morgan, a health economist at the University of British Columbia, has estimated that if Canada adopted the tactics used in New Zealand, depending on what groups of drugs we are looking at, Canada could save 21% to 79% off what is currently spent. New Zealand is willing to play hardball with the drug companies. If companies want to list a new drug on New Zealand’s formulary then they typically have to cut prices on drugs already listed. New Zealand aggressively uses reference-based pricing. Under this system where there are groups of drugs that experts judge are basically the same in terms of safety and effectiveness the government only pays for the least expensive drug in the class. British Columbia uses such a system for five groups of drugs and saves money without putting patients at risk. However, no new drug groups have been added since the NDP lost power in 2001 and no other province in Canada uses the system.

If the real savings are in lowering brand name drug costs why has the Ontario government chosen to take on the pharmacy owners? The answer lies in the power of the multinational drug companies. The pharmacy owners have relatively few allies. The multinational drug companies would not only complain to the provincial government they would also complain to Washington and the European countries where they are based and where they contribute substantially to the economy. Canada has already lost a couple of complaints about drug prices at the World Trade Organization and is unlikely to relish the thought of taking on another challenge.

Bringing down generic prices is only a small part of controlling drug spending in Ontario and the rest of Canada. •

Joel Lexchin teaches health policy at York University and works in the emergency department at the University Health Network.