Although final figures will not be known until April 24, the results of Bolivia’s April 4 regional elections have ratified the continued advance of the “democratic and cultural revolution” led by the country’s first indigenous President Evo Morales. However, it also highlights some of the shortcomings and obstacles the process of change faces.

Initial results from the election for governors, mayors and representatives to municipal councils and departmental assemblies have confirmed the Morales-led Movement Toward Socialism (MAS) as the sole political force with strong support across the nation.
It follows the historic 64% vote to re-elect Morales and the two-thirds majority MAS obtained in the Plurinational Assembly last December. 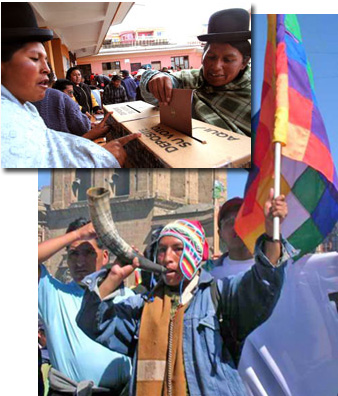 MAS was formed in the mid-1990s by key Bolivian indigenous and peasant organizations in order to create their own political instrument. Many of these organizations are at the heart of the indigenous-led revolutionary movement that overthrew two presidents between 2000-05, before electing one of their own in December 2005.

The Morales government has implemented key demands of the indigenous and peasant organizations by nationalizing gas reserves, allowing the people to participate in the rewrite of a new constitution that dramatically expands indigenous rights, and stimulating an increased sense of pride and dignity among the long-oppressed indigenous majority.

All this in the face of stiff right-wing opposition that, with its stronghold in the east, used its control over a majority of governorships to attack the Morales government – climaxing with a failed coup attempt in September 2008.

Of the nine governorships, current results show MAS winning in six, with a seventh too close to call. This is an increase from the three it won in 2005.
This means MAS has not only strengthened its hold on the west and centre (consolidating its hold on La Paz and Cochabamba after revoking previous opposition governors), but also further weakened the decomposing right-wing opposition in the east.

MAS also won a strong presence in the departmental assemblies. These are the first elected regional bodies to have the power to legislate within the bounds of the regional autonomy outlined in the new constitution approved in January 2009.

Five of the 11 municipalities that voted in favour of indigenous autonomy in local referendums last December elected their own mayors and councillors according to traditional customs in the lead up to regional elections. The decisions were then ratified at the ballot box on April 4. The other six decided to elect candidates directly.

Highlighting MAS’s impressive numerical victory, Morales said that elections “are like soccer, the goals are what matter.” Yet the result was a bittersweet one that throws into sharp relief some of the internal challenges the process of change faces. MAS’s national vote was 51% – less than the 64% it obtained in December and well short of the 70% Morales spoke of in his speech to close MAS’s campaign in La Paz.

The impressive showing in the east, the result of both a concerted campaign and some dubious alliances, was dampened by the loss in Tarija, which sits on 80% of Bolivia’s gas.

Having won the vote in Tajira in December, MAS was certain it could defeat the incumbent governor, a fierce foe of Morales.

Alliances formed by MAS with local elites, such as the MAS candidate for Santa Cruz city, a business owner and ex-member of the right-wing Podemas party, and the recent recruitment of ex-militants of the fascist Santa Cruz Youth Union failed to net goals.
Instead, MAS paid a political and ideological cost for its alliances, losing in urban poor areas such as Plan Tres Mil in Santa Cruz. Rejection of such deals led people in these areas to vote for other candidates.

In Pando, a decision to stand candidates that did not belong to the MAS allowed it to win the governorship and 10 of the 15 mayoralties. However, it means MAS will now have to contend with “MAS mayors” that came from the old traditional parties.

Most significantly, the belief that Morales’ overwhelming popularity could be automatically transferred to MAS candidates, many of whom were imposed from above, and the disregard for alliances with other progressive forces or social movements, led to something unthinkable only a few months ago: the emergence of a new opposition, the centre-left Movement of Those Without Fear (MSM).

Within months, MAS went from having a solid alliance with the MSM, headed by former La Paz mayor Juan Del Granado, to breaking all ties with the MSM and accusing them of being “neoliberal,” “conspirators” and “corrupt.”

The special attention paid by Morales to the campaign for the mayor of La Paz, and the ferocious attack on the MSM (viewed by many MAS supporters as unnecessary) was not enough to secure victory in the capital, a MAS stronghold.

The MSM also won a surprise victory against the MAS in the race for the mayor of Oruro, confirming the trend in urban areas of voting for non-MAS candidates.

The MSM stood MAS dissidents angered by the imposition of non-MAS members as MAS candidates. This policy allowed it to win mayoralties in mining areas with an indigenous majority in the north of Potosi and even Achacachi – a heartland of Aymaran indigenous radicalism where Morales scored 98% in December.

Formerly considered a party restricted to the middle-class areas of La Paz, the MSM now has a presence in more than 100 municipalities.

Discontent among MAS-aligned social movements and supporters led to defeats in other areas where Morales has near unanimous support. A newly created party, led by a coca growers’ union leader and former MAS senator Lino Villca, won in six municipalities in the coca growing regions and the altiplano (high plain area) of La Paz department.

The MAS won in the combative million-strong city of El Alto, but its vote dropped from more than 80% to below 40%.

The surprise was the relatively unknown outsider Soledad Chapeton, whose vote of 30% represented a rejection of the impositions by local union leaders.

La Paz based journalist Pablo Stefanoni said the comments of a local woman on Radio Erbol, that the “vote on Sunday in La Paz is a warning sign to the process of change,” summed up the feelings of many Bolivians.

An April 7 editorial in the pro-government daily Cambio said the results showed:

“the necessity to strengthen the process of structural change … consolidate the direct participation of the organised people in the definition of affairs of the Plurinational State and in doing so eradicate improvisation, internal problems and the personal ambitions of some militants in the process of transformation underway.”

On April 6, Morales commented on the MAS’s defeat in areas that only months ago voted overwhelmingly for him. Morales blamed internal problems and the personal ambitions of some party leaders “that drag with them a colonial heritage due to which they believes their turn has come to stand for an executive position.”

Dionisio Condori, a leader of the powerful United Union Confederation of Campesino Workers of Bolivia, said:

“Our candidates where not taken into consideration because some leaders fell into the game of removing them and imposing others who were not known in the municipality.”

But it is not just the problem of questionable figures from outside the MAS being imposed as candidates. The MAS is dominated by the specific interests of the different indigenous and peasant unions that make it up. Its role in local governments has traditionally been characterized by resisting neoliberal governments and strengthening the position of their organizations.

However, today these same unions are part of the governing party and these practices have often been replaced by inefficiency and improvisation rather than promotion of new participatory forms of local governance.

The challenge of converting MAS from more than a sum of unions into a collective force for change that can nurture the growth of new cadres and participatory forms of local democracy is more pressing than ever.

The rise of a new opposition may open up space for something that has been sorely lacking: an open public debate on how to deepen the transformation of Bolivian society. Through such a battle of ideas, as opposed to the type of denunciations and unconvincing slanging matches seen so far, the process will be able to solidify and extend its support base. In this way, it can open itself up to new sectors and pave the way for the kind of broad alliances with all sectors genuinely committed to change that are vital to safeguarding and deepening the process.

Raul Prada, the vice-minister for strategic state planning, argued this requires drawing up a:

“We need to return to the practice of something we have not done for some time: self-criticism and carrying out a deep and objective reflection.” •

Federico Fuentes is the editor of Bolivia Rising and co-author, with Marta Harnecker, of MAS-IPSP de Bolivia: Instrumento político que surge de los movimientos sociales. He is a member of Australia's Socialist Alliance and is based in Venezuela.