Driving the Poor Deeper Into Poverty

Since 2005, a large part of OCAP’s (Ontario Coalition Against Poverty) work has involved organizing to obtain and defend access to a benefit known as the Special Diet Allowance (SDA). Under this, people living on the Province’s sub poverty social assistance system who obtain the appropriate diagnoses from a medical provider, can receive up to an additional $250 a month for food.

Access to the Special Diet has had to be fought for tooth and nail. Medical providers interested in helping poor people access this benefit are few and far between. Moreover, from the very beginnings of this campaign, we have faced an ongoing struggle against government initiatives to restrict access to the benefit. We have also confronted persistent and pervasive attempts by welfare officialdom to deny the benefit in ways that run counter to the norms of natural justice and administrative fairness that supposedly govern the delivery of social assistance in Ontario. 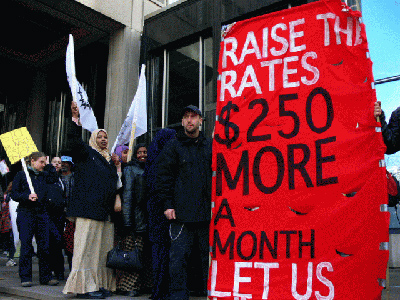 At the end of last year, however, it became clear to us that government and bureaucratic efforts to restrict access to the Special Diet were being taken to a new level. The Auditor General issued a report that included a vicious attack on this benefit. The most dedicated of the medical providers working on Special Diet provision, Dr. Roland Wong, found himself facing an attack from the College of Physicians and Surgeons that may result in the loss of his license to practice medicine. This regulatory body will argue that his efforts to provide income to people in poverty through the Special Diet is tantamount to making incompetent diagnoses.

As this is being written, the prospect that the Liberals will use their upcoming Budget to abolish the Special Diet outright is looming very large (see our submission to the pre-budget ‘consultations’). Such an attack would have a catastrophic impact on whole communities. However, even if they hold back from eliminating the Special Diet, steps have already been taken to massively restrict access. Memos issued by Queen’s Park to local welfare and disability support offices have given their staff the right to review and reject the medical diagnoses made by medical providers submitting the Special Diet forms. Before elaborating on this appalling and unprecedented attack on a social benefit, it is useful to take a brief look at the motives for this rather desperate attack in the context of the mounting inadequacy of income support for the poor.

Social assistance rates in Ontario today have a spending power that is a full 55% below what it was in the early 1990s. A single person on Ontario Works (OW) would need to get an increase of $300 a month to be back at 1993 levels. The gap between the minimum wage and what a single person on OW receives is greater under McGuinty than at any time since the introduction of the Canada Assistance Plan in the 1960s. Food bank use is setting new records and far more people are experiencing economic evictions than during the days of Mike Harris. For the poor, the Common Sense Revolution of Harris has not ended or simply been consolidated. Dalton McGuinty has intensified it.

Well meaning commentators and critics often try to convince governments to deal with poverty by pointing out that the cost of dealing with its consequences are greater than what it would take to provide adequate income to the poor. The proposition is not untrue but those who advance it miss the point. Income support is provided only to the extent that those in power have recognized that outright abandonment would generate a level of unrest and social dislocation that would be too great to contain. On this basis, welfare is a reluctant concession that has always been set at the lowest levels possible. You can’t force people into the worst jobs on offer nearly as easily if there is a humane and decent system of meeting the needs of those without jobs. This Ontario Government, its endless promises of measures to reduce poverty notwithstanding, is fully committed to retaining and increasing the ability of the welfare system to convince the poor to take their poverty in the form of a paycheque.

It is in this context that the attack on the Special Diet can be understood. In 2005, it was a puny $6-million program but the campaign to expand access has transformed it into a $200-million counter offensive to poverty in Ontario. Today, 162,000 people, 20% of those on assistance and heavily concentrated in the GTA, have won access to the allowance. A single person who was receiving the maximum for basic needs and shelter would get only $585 a month without the Special Diet. Add $250 for the Special Diet and he or she has some chance of paying the rent and eating rather than making a choice between eviction or starvation. Especially at a time when the Liberals are preparing to force working people to pay for the crisis of the system. They are not ready to tolerate an initiative that significantly limits the ability of social assistance to force people into that section of the workforce that endures the highest levels of exploitation.

The present attack on the Special Diet is based on a set of instructions from the Ministry of Community and Social Services that are contained in two memos sent, last December, by the Directors of Ontario Works and the Ontario Disability Support Program to the local social assistance regimes throughout the Province. These explicitly instruct staff to “seek additional information or deny the application” if they question the diagnoses made by a qualified medical provider. Examples of when it would be proper to know more about medicine than a health professional are application forms that contain “a questionable combination of medical conditions” or situations where “multiple benefit unit members are identified for a maximum SDA.”

For years, OCAP and others advocating for people getting the Special Diet have dealt with situations where welfare offices tried to overrule the medical decisions of health care providers. We have always been able to prevail in these situations because it would be massively improper for social services staff, untrained in health or medical science, to rule on medical matters. These memos, however, sanction and codify such an abuse and, now that this improper conduct has the green light, it is being left to the local regimes to take things a good way further than even the memos indicate. Over the last weeks, the OCAP office has been flooded with calls from people being denied the Special Diet. Toronto welfare and ODSP offices are interpreting their new instructions with an arrogance and audacity that knows no bounds.

We are dealing with situations where people go to see a family doctor they have gone to for years, who does blood tests on them and prescribes less than the maximum amount. When they take in the forms, they are told to go to another doctor. Conversely, people who see doctors they have not regularly visited are rejected on the basis that they are ‘doctor shopping.’ We are even seeing situations where people who were recently approved for the Special Diet are being told the rules have changed and the previously accepted application is now rejected.

It should be noted that all of these situations are being brought to the attention of the senior management of Social Services and to the ‘progressive’ Chair of the City Council Committee responsible for welfare matters, Janet Davis. Almost none of the abuses are being overturned. A vital social benefit is being gutted on the basis of two memos and a covert operation of denial that has been given a discreet and approving nod by Queen’s Park and City Hall.

The desperation and anger produced by the attack on the Special Diet has already seen people coming forward to fight it. As before in this campaign, the lead has been given by a mobilization from Toronto’s Somali community. When the systematic denial of the Special Diet began to take affect, hundreds of people descended on the head office of Social Services at Metro Hall. A delegation of people affected also confronted the Council members who sit on the Community Development and Recreation Committee. OCAP also turned out people hit by this cutback to challenge and disrupt a lavish fundraiser for the Ontario Liberal Party. It is clear, however, that we are dealing with a determined effort to destroy the Special Diet. To defend it successfully, we will need wide ranging and serious support from labour and community allies. Moreover, the defensive struggle on the Special Diet must go over to a united and large-scale campaign to raise social assistance rates and restore them to, at least, the level they were at before the Harris cuts. No such campaign can be built successfully unless it is linked to an overall mobilization to defend public services in the face of municipal and provincial attack.

There are three specific initiatives that OCAP is asking people to support. On Tuesday, March 23, we are asking people who back the right to access to the Special Diet to contact the Minister of Community and Social Services at (416) 325-5225 or madeleine.meilleur@ontario.ca and Janet Davis, Chair of the Council Committee responsible for Social Services in Toronto at (416) 392-4035 councillor_davis@toronto.ca. Tell them you support the following demands:

Secondly, on, Friday, April 9, at 6:00pm, at the Parkdale Activity and Recreation Centre, 1499 Queen Street West, OCAP will hold a public meeting to present testimony from people affected by the denial of the Special Diet and to map out a plan to defend the benefit and fight to raise the rates. Please help build this meeting and come out to show your support.

Finally, on April 15, OCAP is holding a march and rally on the Provincial Government to take forward this fight. It will demand a 40% increase in Social Assistance Rates, full access to the Special Diet and will call for a common front in Ontario to defend public services. Please go to your unions and community organizations and ask that this action be endorsed and that contingents be organized to join it.

The attack on the Special Diet is ugly and is hurting some of the poorest and most desperate people in this City and Province. But, sadly, it is only one of the first of a series of attacks that we will be facing in the months ahead. Leave it up those in economic and political power and it will be workers and poor people who will pay for the crisis of capitalism. At every point, we have to mobilize and struggle to send the bill for a broken system back to those who own and operate it. •

Liisa Schofield is a documentary filmmaker, an anti-poverty activist and an activist for Palestinian rights. She is also the Volunteer and Programming Coordinator at OPIRG Toronto.