Indicating further integration with its closest neighbour and ally’s foreign policy priorities, the Canadian government is in the advanced stages of establishing a foundation to promote liberal democracy, akin to the controversial U.S. National Endowment for Democracy. 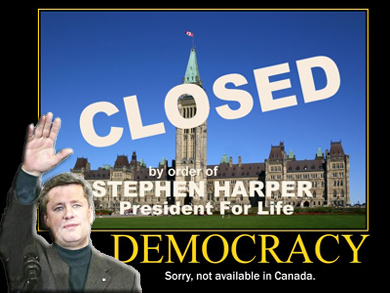 Last December, the minority Conservative government of Stephen Harper quietly tabled in parliament a bipartisan blue panel report titled, “Advisory Panel Report on the Creation of a Canadian Democracy Promotion Agency.” The panel is recommending that the government create the Canadian Centre for Advancing Democracy, with a proposed budget of between 28 million and 65 million U.S. dollars per year.

Since it assumed power in 2006, Harper’s government has touted its commitment to placing democracy promotion as “one of the four core principles of its foreign policy.” Speaking recently in Davos, Switzerland, as global elites gathered for the World Economic Forum, Harper included democracy promotion among the issues which “require the close cooperation of friends and like-minded allies.”

Steven Fletcher, Harper’s minister of state for democratic reform, said he was given the responsibility to “construct and implement” the new democracy foundation. To do so, his office gathered “experts in the area of democracy promotion.” Now that their report has been tabled, Fletcher told IPS that the government “will be plotting the appropriate course,” but would offer no timeline on when it may be legislated.

Canada already has an array of existing organizations that promote democracy abroad. In 2005, the then-Liberal government established the Democracy Council, which is an informal forum of Canadian organizations actively involved in democracy promotion who meet biannually. Once in power, the Conservatives kept the Democracy Council in place, and accelerated Canadian collaborations with the U.S., including funding several National Endowment for Democracy (NED) related projects.

Dennis Pilon, a professor of politics at the University of Victoria, says the Harper government is “taking a lot of their cues from the Americans, particularly the Republicans,” and adds that they conduct a lot of their policies “by stealth.”

“And I think this [democracy foundation] is an example of the stealth; they think that a democracy institute will allow them to more effectively integrate their efforts with the United States, which will then allow them to gain all sorts of kudos and points with the Americans,” Pilon said.

Fletcher said the new foundation “will be a made in Canada agency that will complement what other countries are doing but it will be run by Canadians to explain the importance of democracy…in emerging and post-conflict countries.”

Recent developments also follow an extensive study on democracy promotion that was conducted by the Standing Committee on Foreign Affairs and International Trade in 2007. The Committee’s final report declared, “The creation of a new foundation to carry out our nation’s democratic development efforts is the most significant recommendation resulting from our deliberations.”

Two federal parties, the Bloc Québécois and the New Democratic Party, issued “dissenting opinions” against the report. The Bloc cautioned that “the types of measures recommended in this report may lead to political interference in the domestic affairs of another country,” while the NDP warned, “’Democracy’ promotion can be, and has frequently undermined indigenous democratic processes around the world, when abused for the partisan foreign policy purposes of an external state.”

Fletcher told IPS that the dissenting opinions are “just not valid. This will be an arms-length agency to help countries develop democracy, and we know that democracy is the best way to empower people.”

In a statement e-mailed to IPS, the NDP’s foreign affairs critic, Paul Dewar, said “It’s rather ironic for the government to be pitching the creation of a democratic development organization at a time that our parliament has been shut down by the prime minister.”

Instead of returning to session as scheduled on Jan. 25, Harper suspended parliament until Mar. 3, following the conclusion of the Vancouver 2010 Winter Olympic Games. Critics say he did so to suppress debate over allegations that Canadian soldiers in Afghanistan handed detainees over to Afghan security forces who, in turn, tortured them.

Mark Neufeld, a professor in the Department of Political Studies at Trent University, said Canada’s role as an “occupier” in Afghanistan precludes it from promoting democracy there.

“You can argue the occupying and intervention legacy of Canada in Afghanistan means that it can never be a democracy promoter there. People will never trust us to be some kind of neutral purveyor of good governance along a democratic model. We’ve been there mainly propping up a government that’s not democratic.”

Several U.S. experts have indicated that a Canadian democracy foundation would be welcomed. In the Standing Committee’s report, former USAID consultant and advisor to the NED, Gerald Hyman, was described as stressing to committee members “that there is a role for Canada…where the U.S. carries a lot of counter-productive baggage…[Hyman] acknowledged that Canada can do things that the U.S. cannot.”

Robert Pee, who is completing a PhD on the NED and the use of democracy promotion as a tool of “political warfare” at the University of Birmingham, attributes such sentiments to the “tactical flexibility” that such a Canadian foundation might provide as a complement to U.S. efforts.

In an e-mail to IPS, Pee explained,

“Such a foundation would be able to operate more under the radar than the NED itself; thus, it seems likely that its creation would result in a division of labour between it and the NED, with the Canadian foundation working in areas that are too ‘hot’ for the NED to touch.”

Political warfare, says Pee, citing since-declassified definitions produced by Cold War U.S. policy planners “is the employment of all the means at a nation’s command, short of war, to achieve its national objectives.”

Created in the waning days of the Cold War by President Ronald Reagan, since then the NED “continues its core mission of protecting U.S. national security interests.” The Barack Obama administration has continued to provide the NED with unprecedented levels of funding.

One danger for the Canadian foundation lies in the possibility that it will emulate the NED’s mission. A document dating to 2006, obtained by IPS from Canada’s Department of Foreign Affairs through the Access to Information Act describes the little-known Democracy Council as an “incarnation of earlier models such as NDI (National Democratic Institute) and NED in the United States.”

Pee offered a warning for Canadians, where “citizens will find that their taxes are being used, not only or primarily to implement their own government’s ‘political warfare’ programmes – which would be bad enough – but largely those ‘political warfare’ programmes which the U.S. would like to see carried out as part of its foreign policy. Thus, Canadians will be paying to implement the foreign policy of the U.S.” •

This article first published by IPS.