Notes on Recent Developments in the European Radical Left

The recent elections in Germany and Portugal have confirmed the emergence of a new radical Left in a number of countries across Europe. In Germany, Die Linke won 11.9 per cent of the vote and 76 seats in the Bundestag. In Portugal, the Left Bloc received 9.86 per cent of the vote and doubled its number of seats to 16. This new Left emerged toward the end of the 1990s with the renewal of social movements and the rise of the anti-globalization movement. What we are now seeing for the first time is an electoral breakthrough that is not limited to one or two countries and which has now become a Europe-wide trend – illustrated by, among others, the examples of the Red-Green Alliance in Denmark, Syriza in Greece and the New Anti-Capitalist Party (NPA) in France. The trend is still fragile and uneven, and is conditioned to a great degree by the different electoral systems that exist from one country to the next.

In France, for example, the NPA and the Left Front (FG) have a joint potential of about 12 per cent. But neither has a single parliamentary seat due to a single-member runoff system that has no proportional representation and encourages “strategic voting” as a lesser evil. 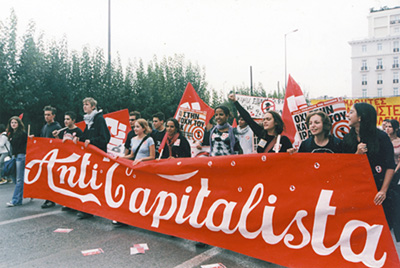 This new Left has arisen for a number of reasons. First comes the retreat or collapse of the Social Democratic and Communist parties that have shaped the traditional Left for the past 50 years. The Communist parties that had identified with the “socialist camp” and the Soviet Union have disappeared or have seen their social base melt away, with the partial exceptions of Greece and Portugal. As for Social Democracy, by supporting or actively implementing neoliberal policies within the framework of European Union treaties, it has actively contributed to the dismantling of the welfare state from which it drew its legitimacy. As a result, under the moniker of “renewal,” the “third way” or the “new centre,” it has metamorphosed into a formation of the centre-Left along the lines of the Democratic Party in Italy. As its ties to working-class voters have weakened, so its fusion with business circles has accelerated. Schroder’s appointment to Gazprom’s board of directors and the promotion of two French “socialists” (Dominique Strauss-Kahn and Pascal Lamy) to the head of the IMF and WTO symbolize this transformation of leading Socialist Party figures into right-hand men of big capital. Stalwart of the “social market economy” and of social compromise, German Social Democracy are now paying the price: in the 27 September elections it lost 10 million voters compared to its results 10 years earlier.

While this centre-Left has become increasingly indistinguishable from the centre-Right, a new generation has grown up after the fall of the Berlin Wall and has known only imperialist hot wars, environmental and social crisis, unemployment and insecurity.

An active minority from this generation of young people has taken an interest in struggle and politics, but it is wary of electoral games and dishonest compromise at the institutional level. Hostile to the squalid state of the world, but unable to determine what the necessary “other world” would look like, this new radicalism can go in diametrically opposite directions – that of a clearly anti-capitalist alternative; that of a nationalist and xenophobic populism (such as the Front National in France or the BNP in Britain); or even that of a new brand of nihilism. It is nonetheless encouraging to note that young and precariously employed workers made up a proportionally larger share of the electorate for Die Linke, and for Olivier Besancenot in the 2007 presidential elections, than they did for any of the other parties.

For all that, the new Left is not a homogeneous current united by a common strategic project. Rather, it is part of a range of forces polarized between resistance and the social movements, on the one hand, and the temptation of institutional respectability, on the other. This has made the question of parliamentary and governmental alliances a real acid test. Until quite recently, Rifondazione Comunista was the crown jewel of this new European Left; but it committed suicide by participating in the Prodi government, a move which in any case didn’t even prevent Berlusconi from returning to power. Beyond the debate on electoral tactics, such an approach reveals an orientation accurately summarized by Die Linke leader Oskar Lafontaine: “Apply pressure to restore the welfare state”. It is therefore not a matter of patiently building an anti-capitalist alternative, but of “applying pressure” on Social Democracy in order to save it from its centrist demons and take it back to classic reformist politics within the framework of the established order. As for “restoring the welfare state,” one would first have to make a break with the Stability Pact and Lisbon Treaty, rebuild European public services, and submit the European Central Bank to democratically elected bodies – in other words, one would have to do exactly the opposite of what Left governments have done for the past 20 years and continue to do when they are in power. Social Democracy’s moderate stance in the face of the economic crisis and its common manifesto for the recent European elections indicate that its submission to market demands is now irreversible.

In contrast, in the wake of the Portuguese elections Left Bloc leader Francisco Louça rejected calls to support the Social Democratic government of José Socrates. He declared that the Left Bloc would be “in the opposition” against planned privatizations, against the dismantling of public services, against the new labour code, and therefore in opposition to the government. This is also the bone of contention between Olivier Besancenot’s NPA – which rejects any kind of governmental alliance with the Socialist Party – and the Communist Party, which is clearly working toward a new “plural Left” alliance with the Socialists and Greens. This is in spite of the disastrous record of the previous “plural Left” government, which led to a second-round runoff in the 2002 presidential elections between the far-Right Le Pen and right-wing Chirac. This debate is no doubt present in all the parties of the new Left – and especially in Die Linke given that its alliance with the social-democratic SPD in Berlin is already very controversial and may become the party’s general policy, as its recent alliance in the state of Brandenburg appears to indicate.

This gives us a clear idea of the strategic choices with which the new Left is going to be confronted. Either it makes a priority of the institutional sphere and resigns itself to playing the role of counterweight to the traditional Left; or it prioritizes struggles and social movements as the cornerstone for the patient building of a new political force of the exploited and oppressed.

This in no way excludes looking for the broadest unity of action with the traditional Left against privatization and outsourcing, in defence of public services and social programs, for democratic freedoms and in solidarity with immigrant and undocumented workers.

But it requires strict independence from a Left that loyally manages capital’s affairs – to ensure that the new emerging forces are not totally put off politics.

The social and environmental crisis is just beginning. Whatever possible recoveries and upturns there may be, unemployment and insecurity will continue at very high levels; and the effects of climate change will continue to worsen. We are not dealing with the type of crisis that capitalism periodically goes through, but rather a crisis of the outrageousness of a system that seeks to quantify the unquantifiable and provide a common measure for the incommensurable.

It is therefore probable that we are only at the beginning of a huge upheaval from which the political landscape – through a process of recomposition and redefinition – will emerge drastically overhauled a few years from now.

This is what we have to prepare for. We cannot sacrifice the emergence of a medium-term alternative for the sake of petty parliamentary jockeying and hypothetical immediate gains that end up in bitter disillusionment. •

Daniel Bensaïd is author of many books. Among them: Un monde à changer: mouvements et stratégies (2003) and Marx for Our Times (2002). His latest book Strategies of Resistance & ‘Who Are the Trotskyists?’.