Vigorous Activism Can Defeat the Denialists

A lesson from Seattle for Copenhagen

Preparations for the December 7-18 Copenhagen climate summit are going as expected, including a rare sighting of the African elites’ stiffened spines. That’s a great development (maybe decisive), more about that below.

While activists help raise the temperature on the streets outside the Bella Centre on December 12, 13 and 16, inside we will see global North elites defensively armed with pathetic non-binding carbon emissions cuts (U.S. President Barack Obama’s promise is a mere 4% below 1990 levels) and carbon trading, but without offering the money to repay the North’s ecological debt to the global South.

The first and third of these are lamentable enough, the second is the most serious diversion from the crucial work of cutting greenhouse gas emissions. A nine-minute film launched on the internet on December 1, The Story of Cap and Trade [watch the film at the end of this article], gives all the ammunition climate activists need to understand and critique emissions trading, and to seek genuine solutions.

Another important diversion emerged on November 20, when hackers published embarrassing emails from the University of East Anglia (UEA) Climate Research Unit. What I’ve understood from Guardian’s George Monbiot and EnviroKnow is roughly this:

The unapologetic UEA researcher Phil Jones seems to think that because climate denialists have been a pain in the arse (since 2001), it was okay to hide scientific data (paid for by taxpayers), and to avoid wasting valuable time addressing the loonies’ arguments: “Initially at the beginning I did try to respond to them in the hope I might convince them but I soon realised it was a forlorn hope and broke off communication.”

Where I live, Durban in South Africa, we’ve had dreadful experiences with two kinds of life-threatening denialisms: apartheid and AIDS.

Dating back many decades, apartheid-denialists insisted that black South Africans had it better than anywhere else in Africa, that anti-apartheid sanctions would only hurt blacks and not foster change, and that if blacks took over the government it would be the ruination of South Africa, with whites having all their wealth expropriated etc.

From around 1999-2003, AIDS denialists very vocally insisted that HIV and AIDS were not related, that AIDS medicines were toxic and would do no good, and that the activists’ lobby for the medicines was merely a front for the CIA and the big pharmaceutical corporations (denialist-in-chief Thabo Mbeki is now being widely cited for genocide involving 350,000 unnecessary deaths due to his presidency’s withholding of AIDS medicines).

In both cases, as with human-induced climate change, the denialists’ role was to
entrench the status quo forces of state and capital. They were, simply, hucksters for vested interests.

In both cases they were defeated, thanks to vigorous social activism:

We’ll look back at the climate denialists and judge them as merely a momentary quirk in human rationality, ultimately not in the least influential. The real danger comes from fossil fuel firms which, like big tobacco corporations decades ago, know full well the lethal potential of their products. Their objective is to place a grain of doubt in our minds, and for that climate denialists are rather useful.

The fossil fuel firms – especially BP, Shell, Chevron and ExxonMobil – not only fund denialist think tanks and “astroturf” outfits, such as the Global Climate Coalition (i.e. fake green groups). They support members of the U.S. Congress – such as Rick Boucher from Virginia – who energetically sabotage legislation aimed at capping emissions (Congress’ offsets, carbon trading and other distraction gimmicks mean there will be no net U.S. cuts until the late 2030s). They also work with mainstream “green” groups – the World Wide Fund for Nature comes to mind – to halt environmental progress.

These corporations are far more insidious than the email hackers. I hope we aren’t further distracted by the UEA affair and that this is a quickly forgotten little episode of dirty academic laundry meant for the dustbin of our sloppy movement where it belongs, so we can make the movement stronger, more transparent, more rigorous, more democratic and much more militant in trying to defeat the fossil fuel industry.

One way to do so is to flash back to Seattle a decade ago, when the World Trade Organization (WTO) mobilisations on November 30, 1999, taught civil society activists and African leaders two powerful lessons. Veteran anti-apartheid and social justice activist comrade Dennis Brutus from South Africa – who turned 85 years old on November 28 – reminded us
of two lessons from one of the most eventful weeks in his amazing life.

First, working together, African and global South leaders and activists have the power to disrupt a system of global governance that meets the global North’s short-term interests against both the global South and the longer-term interests of the world’s people and the planet. Second, in the very act of disrupting global malgovernance, major concessions can be won.

Spectacular protests against the WTO summit’s opening ceremony is what most recall about Seattle, 1999: activists “locking down” to prevent delegates entering the conference centre, a barrage of tear gas and pepper spray from hundreds of riot cops, a sea of broken windows and a municipal police force later prosecuted for violating U.S. citizens’ most basic civil liberties. (See David and Rebecca Solnit’s excellent new book, The Battle of the Story of the Battle of Seattle.)

That was outside the convention centre. Inside, when negotiations belatedly got underway, African leaders quickly grew worried that further trade liberalization would damage their tiny industrial sectors. The damage was well recognised, as even establishment research revealed Africa would be the continent to suffer the worst net losses from corporate-dominated free trade.

The U.S. trade representative, Charlene Barchefsky, repeatedly insulted African elites who raised this point. With the exception of South African trade minister Alec Erwin, who enjoyed an insider role to promote South Africa’s self-interest, delegations from the Organization of African Unity (OAU, since renamed the African Union) were soon furious.

As OAU deputy director general V.J. McKeen recalled: “They went out to a dinner in a bus, and then were left out in the cold to walk back… When we went into the room for our African
group meeting, I mean, there was no interpretation provided… so one had to improvise. And then even the microphone facilities were switched off.”

Tetteh Hormeku, from the African Trade Network of progressive civil society groups, picks up the story:

“By the second day of the formal negotiations, the African and other developing-country delegates had found themselves totally marginalised… [and threatened] to withdraw the consensus required to reach a conclusion of the conference. By this time, even the Americans and their supporters in the WTO secretariat must have woken up to the futility of their ‘rough tactics’.”

By walking out, the Africans’ strong willpower earned major concessions in the next WTO summit, in Doha, in November 2001. At the same time as the global justice movement began widening into an anti-imperialist movement in the wake of the USA’s post-9/11 re-militarisation, African activists delved deeper into extreme local challenges, such as combating AIDS. In Doha, African elites joined forces with activists again.

On this occasion, the positive catalyst was a South African government law – the 1997 Medicines Act – which permitted the state’s compulsory licensing of patented drugs. In 1998, the Treatment Action Campaign was launched to lobby for AIDS drugs, which a decade ago were prohibitively expensive – $15,000 (U.S.) per person per year – for nearly all South Africa’s HIV-positive people (roughly 10% of the population).

That campaign was immediately confronted by the U.S. State Department’s attack on South Africa’s Medicines Act, a “full court press,” as bureaucrats testified to the U.S. Congress. The U.S. elites’ aim was to protect “intellectual property rights” and halt the emergence of a parallel inexpensive supply of AIDS medicines that would undermine lucrative Western markets.

In solidarity with the South Africans, the U.S. AIDS Coalition to Unleash Power (ACTUP) began protesting at Gore’s campaign events in New Hampshire, Pennsylvania and Tennessee. The demos soon threatened to cost Gore far more in adverse publicity than he was raising in Big Pharma contributions, so he changed sides.

As pressure built, even during the reign of president George W. Bush and his repressive trade representative Robert Zoellick (now World Bank president), the WTO’s Trade Related Aspects of Intellectual Property Rights system was amended at Doha in late 2001 to permit generic drugs
to be used in medical emergencies. This was a huge victory for Africa, removing any rationale to continue to deny life-saving medicines to the world’s poorest people. 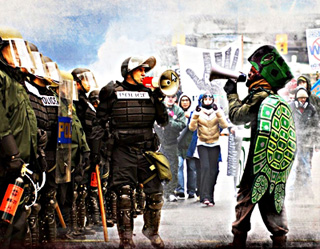 In 2003, with another dreadful WTO deal on the table in Cancun and 30,000 protesters outside, once again the African leadership withdrew from the consensus, wrecking the plans of the U.S. and Europe for further
liberalisation. The WTO has still not recovered.

These are the precedents required to overcome the three huge challenges
the North faces in Copenhagen: 2020 greenhouse gas emissions cuts of at least 45%
(from 1990 levels) through a binding international agreement; the decommissioning of carbon markets and offset gimmicks; and payment on the vast ecological debt owed to victims of climate change. Realistically, the adverse balance of forces currently prevailing will not permit victories on even one, much less all three. What response is logical?

In Barcelona, in early November, African negotiators boycotted the pre-Copenhagen talks, making good on African Union leader Meles Zenawi’s September threat, because the North had put so little on the negotiating table.

Indeed, that is the main lesson from Seattle: by walking out – alongside mass action by civil society protesters – and halting a bad deal in Copenhagen on December 18, we can together pave the way for subsequent progress.

Annie Leonard presents: The Story of Cap and Trade.