Though Not Yet Enough to Quell Grassroots Anger

With high-volume class strife heard in the rumbling of wage demands and the friction of township ‘service delivery protests,’ rhetorical and real conflicts are bursting open in every nook and cranny of South Africa.

The big splits in the society are clearer now. Distracting internecine rivalries within the main left bloc – which saw off the main trade union federation’s president and the South African Communist Party (SACP) treasurer last year – have subsided. From 2005-09, the ruling party’s huge wedge between camps allied to Thabo Mbeki and to the new president, Jacob Zuma, cleaved the African National Congress (ANC) in two, but the latter’s troops have mostly flushed out the former’s from the state and party. 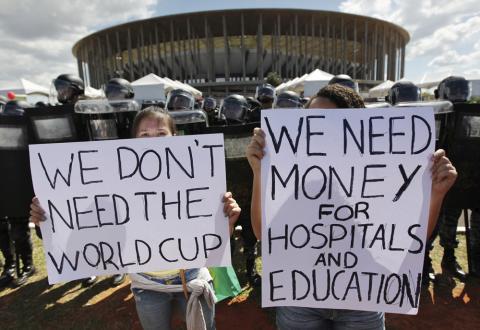 So the bigger story now is the deep-rooted economic crisis. Government fiddling at the margins with Keynesian policies is not having any discernable impact. A lower interest rate – down 4.5% from last year’s peak (to around 10% prime with around 8% inflation) – and a probable 5% state deficit/GDP ratio (last year’s was a 0.5% surplus) are not nearly enough tinkering to stave off a serious depression.

Since the early 1990s, neoliberal policies have made SA economically more vulnerable than at any time since 1929. If five major currency crashes since 1996 were not evidence enough, the 6.4% quarterly GDP decline for early 2009 was the worst since 1984. By late 2008 it was apparent that labour would suffer vast retrenchments, what with a 67% reduction in average work hours per factory worker over three months, the biggest decline since 1970.

The SA economy is likely to shed a half-million jobs in 2009, especially in manufacturing and mining. January 2009 alone witnessed a 36% crash in new car sales and 50% production cut, the worst ever recorded, according to the National Association of Auto Manufacturers. The anticipated rise in port activity has also reversed, with a 29% annualized fall in early 2009. Repossessed houses increased by 52% in early 2009 from a year earlier, as house prices are down 11% with much greater falls ahead. Most minerals are 70% off their peak of a year ago. The stock market lost nearly 50% last year.

Worse is to come, because thanks to the liberalization of trade and finance, SA now has amongst the world’s highest current account deficits and is the most risky emerging market, according to The Economist magazine a few weeks ago. The reason: vast sums of money flood out of SA to the new London financial headquarters of Anglo American, DeBeers, SABreweries-Miller, Old Mutual insurance, Invectec Bank, Liberty Life, and DiData, as well as to portfolio investors who have profited from historically high post-apartheid interest rates.

The past fortnight’s protests across South Africa show how angry communities are:

In a rare victory far away that resonated strongly here, a protest against Shell Oil in late May by the grassroots South Durban Community Environmental Alliance and NGO groundWork – part of a global solidarity mobilization – was rewarded in an out-of-court settlement for Ken Saro-Wiwa’s family and other Ogonis: $15.5-million in reparations for the 1995 murder of the Nigerian pacifist poet-activist and eight of his comrades.

Although not more than a few hours’ worth of Shell’s record 2008 profits, the settlement nevertheless sets a principle for reparations and firms up other challenges to corporate abuse moving through U.S. courts via the Alien Tort Claims Act. One of these is a demand by SA’s Khulumani Support Group and Jubilee SA – including my close comrade, Dennis Brutus – that billions of apartheid-era profits/interest be repaid, a case that will be heard in New York in September.

Back home, SA’s class struggle has been building with such ferocity that Zuma’s impressive presidential victory earned the ruling party only a day or so of honeymoon. After propelling Zuma to power with 65% of the vote, workers gained a few favourable cabinet appointments. SACP general secretary Blade Nzimande and the party’s leading economist, Rob Davies, are now ministers of higher education and trade/industry.

But without a deeper cadreship of leftists in the Cabinet, it is likely that continuity not change will characterize macroeconomic policy. Overall economic ‘planning’ – a new ministerial position within the presidency – is headed by the Left’s bête noire, Trevor Manuel. (Tellingly, when appointed to lead the ANC Department of Economic Planning 18 years ago, he renamed it the ‘Department of Economic Policy.’)

Economic development strategy will be championed by a new minister, Ebrahim Patel, who was COSATU’s main advocate of ‘corporatism’ (big government, big labour and big capital working together) within the National Economic Development and Labour Council, when he led the clothing/textile workers’ union. The new finance minister is former tax commissioner Pravin Gordhan, a long-time Zuma associate with a communist background but technocratic post-apartheid record.

Gordhan was a chemist by training, and knows the merits of the biggest policy push leftwards: National Health Insurance (NHI). The new health minister, Aaron Motsoaledi, defended the Canadian-style single-payer plan in a June 5 speech to Parliament: “The Constitution, under the Bill of Rights Section 27, asserts that health is a right of every citizen and the NHI is going to be implemented to make sure that everybody exercises that right.”

As Motsoaledi pointed out, thanks to privatized health insurance, “7 million people enjoy 5% of the GDP to take care of their health and a whopping 42 million will have to do with the remaining 3.5% of the GDP. If it is ideological to resolve this state of affairs, then I fully subscribe to such an ideology, for it cannot be that humanity is allowed to go on like this.”

On June 1, for example, 2000 metalworkers protested at the SA Reserve Bank for a large cut in interest rates (they got 1%). This was notable not only because it reflects confidence to move beyond the point of production, to the source of some of the troubles: ‘sadomonetarist’ central bankers. In addition, it unveiled the arrogance of Reserve Bank governor Tito Mboweni, who simply refused to accept the metalworkers’ memo of grievances.

Said National Union of Metalworkers of SA (NUMSA) president Irvin Jim: “Anyone who rejects peaceful demonstrations and refuses to accept petitions from the South African working class, who are experiencing extreme economic and social difficulties not of their own making, is inviting big trouble. You are warned.”

Metalworkers attack both Mboweni and his long-time neoliberal ally Manuel, who on June 11 told the World Economic Forum’s Cape Town session that capitalists should now stand up and fight the class war: “When anybody in the trade unions opens their mouth, they run like hell. There’s no counterweight in society, and if there’s no counterweight, you can’t have outcomes that actually advance and progress. If we’re going to have cowards in business, we’re not going to get very far.”

“Disgusting!,” replied NUMSA spokesperson Alex Mashilo. “If Mr. Manuel’s utterances reflect the view and role of the national democratic state in relation to class struggle between labour and capital then the future of the working class and the poor is doomed.”

NUMSA had been run by a faction favourable to Mbeki until a few months ago, but now has turned the corner sharply left. As a NUMSA congress last month declared, “NUMSA and the federation must push and drive the perspective that another world is possible and that therefore the slogan Socialism is the Future – Build it Now must be concretized in concrete programs in the current period.”

Some such programs: “Companies threatened with closure and still viable should be taken over by government or be assisted to form cooperatives. Key sectors producing strategic raw materials e.g. steel, oil, should be considered for nationalisation. NUMSA must lead in the creation of "green jobs" and campaign for funding for cleaner vehicles.”

As the congress resolution concluded, “Neoliberalism has collapsed. NUMSA resolved to engage in all international platforms to win the fight against tendencies that continue to defend the Washington Consensus from being consigned to the dustbin of history… We will also be talking to the Left to hold an international Conference of the Left to develop alternatives to neoliberal policies.”

Will this spirit heal historic splits that kept independent leftists outside the ANC Alliance from finding solidarity and participating in such conferences? (The last was in 1994, and only served to illustrate the two divergent paths, inside and outside the state.) One indication of residual tensions was the justifiable anger that SA trade unionists expressed toward the World Social Forum for holding its most recent international meeting in Morocco, at a time that country continues to occupy the Western Sahara.

To illustrate, there was a minor backlash against NUMSA’s march on the Reserve Bank by African National Congress secretary general Gwede Mantashe, claiming the protest was ‘unhelpful’ because ‘the door is open.’ Young Communist League president David Masondo replied, “Yes, the door is open but the opening is very small for the working class to make an impact.” Mantashe should know, because in 2004 he also led a delegation of several thousand mineworkers to the Reserve Bank unsuccessfully demanding rate cuts.

So the Left continues banging on the door to open it yet wider. The SA police measured more than 30,000 ‘gatherings’ – 15 or more people in some form of protest, for which permission is typically applied for a week ahead of time – from 2004-08. Of these, 10 percent generated ‘unrest.’

With 58,000 incidents, researchers in China registered more recent social protests per person than SA during the first quarter of 2009, for the first time, but I’m not aware of any other country that has been close. And those figures will only rise while the crisis deepens.

Can South Africa again guide internationalist reactions to capitalist overreach? In fighting against apartheid through 1994 and against patents on AIDS medicines from 1999-2003, local activists inspired millions in solidarity and defeated mighty opponents. Beyond the miracle of a half-dozen leftist governments in Latin America, the world seems ripe for socialist renewal from below, forged from labour-community unity. •

In the next New Left Review, Patrick Bond authors a full analysis, which will be presented to the Centre for Social Justice and Socialist Project in Toronto on June 28, and the International Socialist Organization’s San Francisco conference on July 4. See video…