On the eve of the G-20 summit in London, Prime Minister Harper sang the praises of Canada’s big banks to the UK financial press: “[we have] the most free-enterprise financial sector in the world. We’re the only one not nationalising or partially nationalising or de facto nationalising [the banks].” According to the Financial Times, which gave this interview front page treatment, Harper went on to state that Canada’s banks should capitalize on the relative strength of their balance sheets by acquiring assets in the U.S. and other countries and added that he would support such efforts as “an opportunity for Canada to expand its role in the world financial sector.”[1]

Indeed, Canada’s big banks are doing just fine, thank you. Taking advantage of the huge losses weighing down their U.S. competitors, burdened as they are with toxic assets and mountains of debt incurred in the sub-prime crisis, the big five have aggressively moved up the ladder: the Royal Bank (RBC) is now seventh in North-American rankings followed by the Toronto-Dominion Bank, Scotiabank and the Bank of Montreal (BMO) in the eighth, ninth and tenth spots
respectively. The last of the “big five” Canadian banks, the CIBC, is also among the top 50 on the continent.[2] 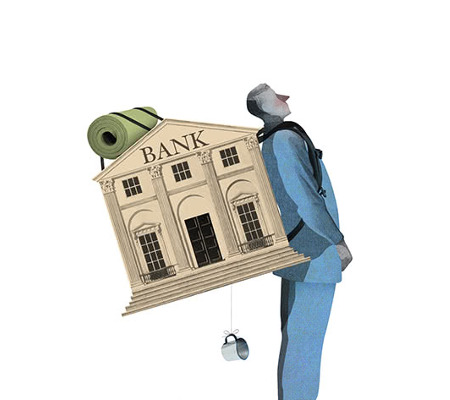 Why, then, extend an estimated $125-billion bailout package to these behemoths? Remember that this is the amount that Ottawa has earmarked for the chartered banks in the past 6 months through its scheme to purchase “secure” bank mortgages called the Insured Mortgage Purchase Program (IMPP). Although this transaction, implemented through the CMHC, is not taking the form of a direct injection of capital or buyout of toxic assets as government bailout programs in the USA or the UK have done, it is nonetheless a massive handout to the local financial sector. [3]

Furthermore, it is seen as such by the relevant international institutions. Quoting a study published on February 18 by the International Monetary Fund (IMF), the French weekly Le Point calculated that Canada ranks third in the world in terms of percentage of GNP allocated in public aid to national banks. Canada’s program amounts to 8.6% of GNP, ahead of the USA which is at 6.3% and well behind the UK which has sunk no less than 19.8% of its GNP into various bank bailout schemes.[4] Disguised as a market transaction, the Canadian aid package is nonetheless a form of government bank bailout, and by international standards, a huge one at that.

According to Federal Finance Minister Jim Flaherty, this public aid program only aims to create a “level field” for Canadian banks as they struggle internationally with competitors benefitting “unfairly” from massive governmental bailouts. Of course, he hastens to add, it must also be seen as a gesture of public interest since the federal government, by injecting massive liquidities into our financial system, aims to avert a credit crunch which would strangle consumers and corporations, leading to widespread economic hardship in the land. However, Harper’s chest-thumping in London gives the lie to the Finance Minister’s claims and reveals the naked truth behind this so-called “public interest” action. It aims to provide Canadian banks with additional fire-power in their efforts to raid troubled competitors south of the border – all at tax-payers’ expense. It should be noted that Canada’s banks have not been shy about using their financial muscle during the past few years: Toronto-Dominion Bank has expanded so aggressively in the past four years (spending no less than $15-billion (U.S.) in the process) that its U.S. branches now exceed its Canadian network; RBC has acquired a Raleigh N.C.-based subsidiary thus helping it to reach its vaunted number 7 status; Scotiabank, BMO and CIBC have also expanded southward in significant manner.

Fearing a public outcry in the wake of the PM’s careless statements, Ed Clark, CEO of Toronto-Dominion now proudly ranked 8th in North America, has tried to dampen the politician’s enthusiasm by reminding the public that the local banks are also suffering from the crisis and that their good showing is only relative to their American and international competitors exceedingly bad form.[5] Other apologists rush to point out that Canada’s financial institutions have so far used only $40-billion of Ottawa’s aid package. Yet, none of these facts detracts from the undeniable reality that this disguised bank bailout program is three times the size of the economic stimulus package contained in the Federal government’s January ’09 budget.

What is quite puzzling is that this flagrant favouritism
toward the banks has gone relatively unnoticed by Canada’s media and business
press. Among the few courageous voices raised in opposition to these handouts
are York University professors Leo Panitch and Sam Gindin. In a recent publication they have formulated the issue in very stark terms: if the banks are to be considered “public interest utilities” worthy of such massive governmental support, why not nationalize them and set-up a truly publicly-owned and democratically-controlled financial sector?[6] Michel Chossudovsky, an Ottawa University-based economist, has been outspoken in his criticism of the bank bailout and has warned, as far back as last November, that these aid programs would be used by the big five to finance acquisitions in the United States.[7] The Quebec-based NGO, ATTAC-Québec recently put out a call to social movements and progressive individuals to support the following demands: one, to establish public control of the banks and the financial sector and two, to end stock-market based pension plans (such as RRSP’s) in favour of state-guaranteed comprehensive retirement programs.[8] A few critiques of the usurious fees and interest rates levied by the chartered banks on credit cards are finally being aired.[9] At a time when the Bank of Canada has lowered the interest rate to a record 0.25%, it is absolutely scandalous for financial institutions to charge consumers anywhere from 10 to
20% on credit card debt.

As debate continues among left-wing forces and
social organizations on the crucial issue of a fightback strategy against the
crisis, the question of radically transforming the financial sector, and not
merely regulating it, should be at the heart of these discussions. Many voices
in Quebec have angrily denounced the $40-billion losses incurred by the Quebec
pension fund (la Caisse de dépot et de placement du Québec) through speculative market and real-estate investments, but that anger must be directed at the plundering financial system as a whole. Its main institutions, the big chartered banks as well as the large investment funds, should not escape critical scrutiny and condemnation. In fact, people’s anger must be turned into a lever to build movements and parties capable of proposing radical social change. •

6.
“From Global Finance to the Nationalization of the Banks: Eight Theses on the Economic Crisis,” Leo Panitch and Sam Gindin, The Bullet, 25/02/09.

7.
“The bailout is a handout to the banks. It contributes to financing the restructuring of the banking system leading to a massive concentration of wealth and centralization of banking power. The bailout money will be used by Canada’s chartered banks to consolidate their position as well as finance the acquisition of several “troubled” financial institutions in the US.” by Michel Chossudovsky, in “Canada’s 75 Billion Dollar Bank Bailout,”
Global Research 25/01/09.