Labour Turmoil and the Fight for Public Education

Over the last three decades, the post-secondary education sector in Canada has been consistently undermined by a crisis of under-funding. Provincial and federal governments have followed neoliberal policies which seek to reshape the logic of the public sector while at the same time increasingly transfer its costs away from public provision through taxation and onto the public through individual user-fees. While two decades ago public funding accounted for roughly 82% of university revenues, that figure has now dropped in the vicinity of 50%. These cuts to university and college revenues have necessarily been accompanied by substantial increases in tuition and ancillary fees, higher reliance on private and commercial funding, as well as increased measures at cost reduction in ‘producing’ education such as the reliance on flexible academic labour. 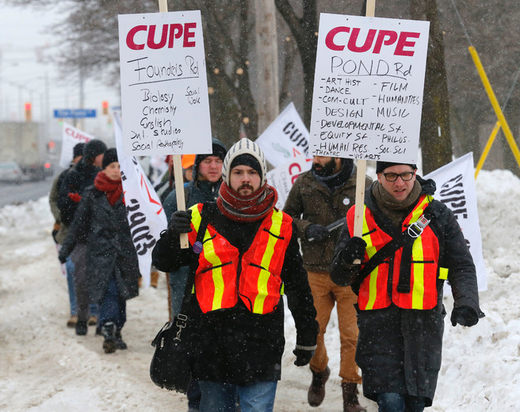 Students have borne a large burden of these changes. Between 2000-2001 and 2005-2006 tuition fees in Canada increased by 38% on average. In Ontario alone, tuition fees have more than tripled since the 1990s. While students are paying more for their education, the government cutbacks that have accompanied these increases have meant that the quality of education has decreased. From shortage of infrastructure to ever larger class sizes and lower faculty per student ratios, students are increasingly paying more for less. Added to this mix an ever-increasing tendency for commercial and corporate presence on campus, the public space of the post-secondary education has been continuously eroded into what has been termed as the “neoliberal university” (See Eric Newstadt, “The Neoliberal University: Looking at the York Strike”,
Bullet # 165, December 5, 2008).

The emergence of the neoliberal university has also meant that the whole logic of the university as a public space for the dissemination and creation of knowledge as a public good has been substantially reconfigured. With ever increasing administrative bodies, universities are increasingly seen as venues for the training of a disciplined working force and policy is formulated so as to encourage and fund commercially viable research through private-public partnerships. These partnerships, aside from socializing the cost of research and development while surrendering the profits to private interests, open significant space for private interests to wield power and direct university affairs and curriculum. Students and researchers wishing to pursue critical research are increasingly facing road-blocks under a system that has been reshaped to encourage and support education and research projects which will have immediate profit value for the private sector.

Education and Student Activism in the Neoliberal University

These same developments have had a tremendous effect on post-secondary education workers. The cutbacks to public funding and the ensuing of the logic of fiscal restraint and neoliberal readjustment have meant that the quality of jobs offered by the university has significantly diminished. At York University in Toronto, for example, the ratio of tenured faculty to contract faculty has reversed over the last decade with more than 50% of the teaching now being conducted by contract faculty or teaching assistants. Increasing enrolments are accompanied with increasing reliance on the flexible labour of contract faculty who have no job security and are often paid a third or less of that of tenured faculty. These academic workers are forced to face increasingly precarious employment and strenuous job environments as class sizes and work demands increase without the adequate corresponding support. The preoccupation with cost-reductions and realignment of the Canadian public university system toward the logic of the private-sector, has meant that while administrators are continuously rewarded for ‘good management,’ increasingly defined in capitalist managerial terms, with ever increasing salaries following neoliberal pay polarization rewarding senior managers, workers and students are disciplined and must pay the price.

Graduate and undergraduate students today have come to the public education system while these changes were already well in place. As such, the neoliberal logic of fiscal restraint, as well as the individualistic and instrumental logic to education, has been the immediate experience and relation to education. In such a context, it becomes increasingly difficult to organize and engage students in a movement to fight-back neoliberal attacks to the post-secondary education system.

The Canadian student movement, mainly organized around the Canadian Federation of Students, has for many years been forced to play a defensive role on many governmental attacks. It has yielded significant successes in blocking disastrous plans such as income contingent repayment loans and in gaining tuition fee freezes and reductions. Campaigns to drop fees and fight back privatization have kept many students engaged and organized, while at the same time keeping the discussion on public education and funding alive. On November 5th of this year, thousands of students from across the Greater Toronto Area marched to Queen’s Park demanding reinstatement of government funding and a progressive move toward the decrease and eventual elimination of fees as the most important measure in assuring the quality and accessibility of post-secondary education. The ‘Drop Fees’ campaign is a significant initiative to address issues of post-secondary education in a way that can draw and connect with other progressive actors in the sector such as labour.

Many student activists see the connections between labour issues and student issues and as such feel an immediate sense of solidarity for striking workers. But it is perplexing that some of the same students who have supported their students’ unions in the Drop Fees campaign for reduction and eventual elimination of tuition fees fail to see the connection that this student struggle has with that of academic workers in the university. Not only do the working conditions of university educators directly impact the learning conditions of students, but their fight against the constant pressure toward flexible labour and lower wages is against the same forces which increasingly push for higher tuition fees, more privatization and restructuring of curriculum to fit private interests.

The Strike at York University

The recent strike at York University by academic workers represented by the Canadian Union of Public Employees, Local 3903 (CUPE 3903) has raised important questions regarding the connections between student and labour issues in the post-secondary education sector. The mainstream media coverage of students during the strike has focused its attention on those expressing opposition to the strike while ignoring the many other students who have showed support and organized in solidarity with CUPE 3903 members. This work has resulted from an understanding that the respective struggles of workers and students in the post-secondary education system are different facets of the same fight across the sector and beyond. A more solid movement between workers and students is a clear requirement to a successful struggle for a quality and affordable public education system.

While the strike at York University has inevitably disrupted the livelihoods of thousands of workers, educators and students, the perception of some that students and CUPE 3903 members stand in opposition is flawed in that the conditions of funding in the neoliberal university perpetuate both tuition hikes and labour strife amongst academic workers. Many striking members of CUPE 3903, for example, are students themselves and thus directly affected and involved in student issues. But most importantly, they are responding to the same attacks on the public post-secondary education system as students.

In the end, if there is going to be a meaningful movement toward reinstatement of public funding to the Canadian university system and re-establishment of universities as public spaces, it will have to be a collective work from both students and labour in forcing governments to abandon the neoliberal policies guiding the sector and struggling to increase public funding. The test of the current strike at York University is as much about making these connections to student struggles against the neoliberal university, and the wider CUPE campaign addressing part-time academic labour, as it is about collective bargaining itself. This is a movement that needs to be built across universities and colleges in Ontario and across Canada. It will require a solid analysis of the fight ahead, and that both students and workers stay united in the fight for public education. •

Besmira Alikaj is an activist in student politics in Ontario.