Radovan Karadzic Faces Trial But Who Can Judge?

According to the generally accepted political logic, the arrest of Radovan Karadzic and his bringing to Hague Tribunal are expected to put an end to the Balkan drama of 1990s. But what’s actually happening seems to be quite the reverse. The Serbian society has got accustomed to the new reality. It suffered another indignity as Kosovo had declared independence in February of 2008. The Serbian society put up with its defeat preferring the distant opportunity of its integration into the European Union to the losing struggle against the West. This is indicated by both the outcome of the presidential election in Serbia, which brought a pro-Western candidate to power, and the sluggish reaction to Karadzic’s arrest. If this had occurred, for example, five years ago, a lot of protesters would have gone into the streets. Now, despite the fact that a large part of the population sees the event as a betrayal and a reprisal against the “Serbian hero,” few people took part in the protest action. The Serbian society did not agree with the West and did not like the European ideas, but it had to accept the situation. The Serbians do not consider Karadzic’s punishment to be fair, but they are sure that injustice will triumph and hope that Serbia will receive compensation being admitted to the EU. On the whole, there is complete apathy among the society. 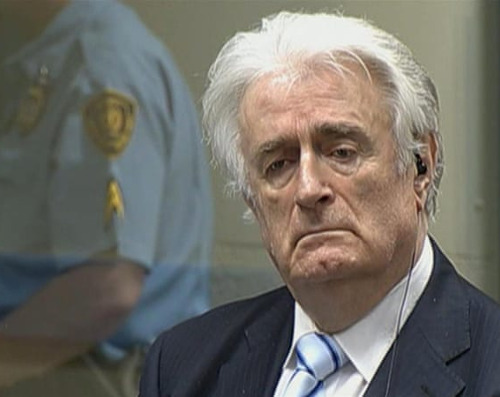 It may be a big mistake on the part of the Serbian authorities to have arrested Karadzic. If they believe that mainly the Serbian police’s inability to find and arrest the villains (heroes) of the Bosnian war prevents Serbia from joining the EU, the Serbian authorities are extremely naive. Against the background of the general crisis of the European project, after the referendum in Ireland has been lost and when differences in the Western community have been growing, there is almost no chance that new countries will join the EU. But even if Serbia managed to do that, it would be disappointed like its East European neighboring countries that had become the EU member states. When in Serbia the issue of Karadzic’s bringing to the tribunal in The Hague was being addressed, in Brussels it was decided to cut off aid that Bulgaria should receive within the framework of the European programs. The reason is corruption and Bulgaria’s political system which does not meet the Western standards. Rumania has been warned too. Those two countries are very loyal to Brussels, but at a time when the EU is facing a growing economic and political crisis it cannot afford to satisfy the requirements of the East European elites. As for the rest of the population of the East European states, they are supposed to be cheap manpower. But this manpower is needed less and less in the EU. The sagging demand makes even the cheapest manpower redundant.

Serbia’s wish to do its best to enjoy the West’s favor is quite understandable, but it does not make the Karadzic trial more moral and legitimate. Those who persecuted and arraigned him do not seem to be bearers of high moral principles, justice and humanity. Karadzic may be seen as a hero only by those who think in terms of the late Middle Ages when the ruler was considered good only if he protected the interests of his own people resolutely and strictly, with human lives and morality being of no importance to him. But even this logic, which is ascribed to Niccolo Machiavelli, cannot justify Karadzic since he was defeated. Victors are not judged. But Karadzic is a loser, and therefore he is under trial.

What matters here is not so much Karadzic’s guilt as the morality of his judges. Karadzic and, most likely, his associate General Ratko Mladic will answer for the Srebrenica Massacre. No politicians answered for the murders of the Serbians in Croatia. The political leaders of the Croatian and Bosnian murderers, unlike the Serbian ones, escaped trial. Recently one of the leaders of the Albanian nationalistic movement in Kosovo, who is accused by the Serbians of massacres, has been acquitted in a demonstrative way. No wonder that the Serbian society does not think that the Western courts are fair.

Bill Clinton and Tony Blair are responsible for the bombardments of Bosnia and Serbia, but nobody will think about prosecuting those respectable politicians.

When the Serbian detachments occupied Srebrenica, a Dutch peacemaking battalion was deployed there. The only task of the battalion was to protect the civilian population, but its commanders kept from the task and, as a result, the Serbians and the Muslims were left to deal with each other. Later on, this led to a scandal in the Netherlands, but no one of the country’s highest-rank military officers was tried by a military tribunal. Previously military officers were shot in wartime for such a violation of the duty.

In the Netherlands Karadzic will have to stay in a pretty comfortable cell for many years attempting to justify himself. Former President of Serbia Slobodan Milosevic died in The Hague before being sentenced. I doubt that Karadzic’s situation will be different. The tribunal is both unfair and inefficient. The relatives of the Bosnian Muslims, who would like Karadzic to be punished, as well as the Serbians, who look on Karadzic as a hero, will be disappointed in the long run.

In a sense, Karadzic has already punished himself. Hiding from persecution he had to change his name and, actually, his personality several years ago. Would anybody envy him? And the occupation, which he chose, indicates that he seeks to turn over a new leaf and expiate his guilt.

Maybe, Karadzic should have been allowed to stay in Belgrade and work as a healer? •

This article first appeared on the Global Alternatives website.

See also the Left Streamed Production of Boris Kagarlitsky on “The Left and Labour in Russia Under Putin.”

Since the collapse of the old Soviet Union in the 1990s and the end of the politically bankrupt regime of Boris Yeltsin in 2000, Vladimir Putin has consolidated power in Russia. He has ruled over an economy growing at about 7% per year, and, in Kagarlitsky’s view, establishing Russia as an ’empire of the periphery’. The left and workers have faced enormous challenges in the new (and not so new) Russia in the face of massive economic restructuring and major political obstacles. This discussion will address how the left, workers and unions are attempting to re-group and respond to these challenges.

Boris Kagarlitsky is Director of the Institute of Globalization and Social Movements. He is is a well-known international commentator on Russian politics and society. His books include Empire of the Periphery: Russia and the World System (Pluto Press, 2008), Russia Under Yeltsin And Putin: Neo-Liberal Autocracy (TNI/Pluto).