A drastic reduction in the adequacy of income support payments is key to the neoliberal agenda. This is especially true in a country like Canada that had earlier seen the consolidation of a basic social infrastructure. However much the balance is tilted in favour of the employers, employment insurance (EI) and welfare payments limit the desperation of the unemployed and the degree to which those with jobs can be forced to make concessions. Massive reductions in federal EI and provincial social assistance rates have been a focus of governments in the last fifteen years and the Mike Harris ‘Common Sense Revolution’ in Ontario was a very big part of this process. 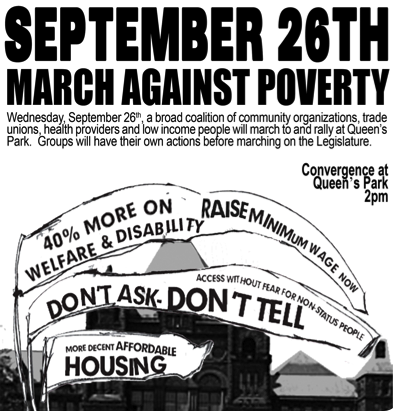 The dramatic and confrontational Harris years have given way to a more sedate pace of social retrogression under the direction of the McGuinty Government. Nonetheless, once inflation is taken into account, 760,000 people on social assistance in Ontario will be poorer when McGuinty goes to the polls than they were when he began to implement his rather dubious agenda of ‘change’ in this province. At least a 40% reduction in the spending power of welfare cheques has taken place since 1995. Harris’s work has not been reversed under the Liberals. It has really only been consolidated.

The demand to ‘Raise the Rates’ by 40% has been a major focus of the Ontario Coalition Against Poverty’s (OCAP) activities since McGuinty took power. We have challenged the Liberals on their broken promises and duplicity. It has, however, been a very difficult period by virtue of a very serious demobilization of social resistance. We have not seen major protests or campaigns to place demands before the regime in Queen’s Park. The myth of a kinder and gentler Liberal Ontario has been able to take hold in this situation. Until recently, a major political mobilization around Provincial anti-poverty demands seemed beyond our grasp. A broad-based coalition of union and community organizations, under the name of Toronto Anti Poverty is now planning a September march on the Ontario legislature. Several initiatives underlie this development.

After a couple of years of raising the demand for a major welfare increase from the Liberals, OCAP came across a provision within the rules of the system known as the Special Diet Policy. This allowed for a monthly payment of up to $250 a month per person on assistance, if a qualified medical provider diagnosed the need. One of the most important fights we’ve ever taken up came out of this. We reasoned that this obscure provision was never intended to be widely known and that, even where people on assistance applied for it, would in most cases by denied by the bureaucracy of the system. However, we asked ourselves what would happen if we could organize to ensure that thousands could obtain access to medical providers ready to fill in their applications for the Supplement. Moreover, we posed the question of how the matter would be affected if this mass of applicants had serious levels of support to ensure they could not be turned away empty handed when they put in their forms.

Throughout 2005, a Special Diet Campaign unfolded that provided concrete answers to these questions. Over 8,000 people passed through community clinics in Toronto that OCAP initiated and these spread to other Ontario towns. While the direct results of our efforts were significant, of much greater importance was the degree to which an awareness of the Special Diet spread spontaneously through poor communities. In that year, spending on the Supplement by Ontario Works and Ontario Disability Support offices in this Province went up by $40-million.

The campaign, however, went beyond an effort to put more money into peoples’ pockets by utilizing a provision within the rules of the system. We very much presented this as a tactic that had to be linked to the bigger and more important issue of a major general increase in welfare income. This mix of a short term effective tactic and a broader goal tended to give a political focus to the campaign that captured imaginations and won support. Medical providers working at the community clinics organized themselves into a ‘Health Providers Against Poverty’ organization. A wide range of social agencies helped with clinics and spoke out to defend the right of their clients to access the Supplement. Many low-income communities, especially immigrant communities, used their informal internal communication networks to ensure that access to the Special Diet was obtained. Within the Somali community this assumed such a significant scale that a new organization, ‘OCAP Women of Etobicoke’ was formed.

The very nature of opposition to our efforts by those in authority tended to increase the support and mobilization on the issue. Despite its supposedly ‘progressive’ Council majority, the City of Toronto did all it could to block access to the Special Diet. Welfare offices turned away hundreds of applicants, often in violation of their own rules. City politicians acted to limit these abuses only with the greatest reluctance and under considerable pressure. However, the huge numbers of people coming to Special Diet clinics had to back up their applications by joining in actions at local welfare offices or at City Hall to ensure they actually got what they were entitled to. This increased the level of organizing and could not fail to bring home to people that the process of applying for a dietary supplement, while necessary, posed the question of why a living income was not generally available?

The provincial government realized very well that greatly increased access to the Special Diet was beginning to call into question their role of quietly consolidating the social cutbacks of the Harris Tories. They acted in November of 2005 to revise the application form for the benefit in ways that would make it much harder to access. In fact, this measure by no means solved their problems. Lots of people did get cut off the Supplement but applications increased to a degree that was astounding. Moreover, after a year of working with the new rules, Health Providers Against Poverty felt able to resume the community clinics and reopen a channel for hundreds of people.

The ongoing agitation around the Special Diet, has meant that the issue of welfare rates has been kept alive. At the same time, agitation on the stagnant minimum wage has also been very significant in building a clamour on poverty issues. The well known efforts of NDP MPP Cheri Di Novo and her Federal counterpart, Peggy Nash, to put the issue of the minimum wage on the legislative agenda gained a very large amount of support and attention. Labour movement campaigns on the issue also put pressure on the Liberal government. OCAP is very critical of the degree to which electoral calculations and notions of political respectability led to these efforts focusing only on minimum wage levels and ignoring questions of social assistance income. However, that they contributed to a general sense that poverty had to be acted on is beyond dispute.

We should also acknowledge that the inaction of the McGuinty regime on poverty also revealed some disagreements at the top in society. The capitalist class is not a monolith and it has a (relatively) left wing along with its right wing. There are those in their ranks who question how far the process of impoverishment should go and can go before it creates adverse consequences and becomes self-defeating. So, we have TD Bank economists arguing for a higher minimum wage and increased social spending and we have the high profile Toronto Star ‘War on Poverty.’ Such divisions within the economically and politically powerful are important and provide an opening for a move to win concessions by those directly affected by the poverty they debate.

So it is that, for the first time in many years, a significant grouping of forces appears to be coming together to forge a common front challenge to poverty. Following a call issued by activists from the Toronto Disaster Relief Committee (TDRC), a working committee of union activists, social agency representatives and community organizers is now planning for a September rally at the Ontario legislature. Demands will focus on social assistance rates, the minimum wage and housing. Added to this is support for the ‘Don’t Ask Don’t Tell’ demand of No One is Illegal. In this city, a demand that those without immigration status be able to obtain basic services without being handed over to immigration authorities is a key and vital anti poverty demand that we all wish to support.

Planning for the September action is in a relatively early stage at the time that this is being written but things are clear enough to sound a note of optimism. Dozens of organizations have already endorsed the event. An ambitious job of outreach in low-income communities is being set in motion. An impressive rally, that includes a series of ‘feeder marches’ by participating organizations, is being developed. An event like this, in the lead up to the provincial election, could have serious political impact and set the stage for more sustained and province-wide mobilizing.

The question of raising social assistance rates and turning back the tide of poverty is not some humanitarian issue. It is a vital question for the ability of the working class population as a whole in terms of defending past gains. For too long, the issue has been treated as a low priority ‘good cause.’ It’s time to change that and build a movement that can place demands before governments that can’t be brushed aside. •