The moment of truth arrives today for the Bloc Québécois, and for those on the left who have pledged their support to its strategy of shoring up Harper’s minority government. It comes in the form of the debate in Parliament scheduled for this evening on extending the Canadian mission in Afghanistan for another two years past the current commitment to 2007. (It will be followed by a decision by Canada to take over the NATO command of the entire Afghanistan mission in 2008, which would effectively force Canada to commit even further.) 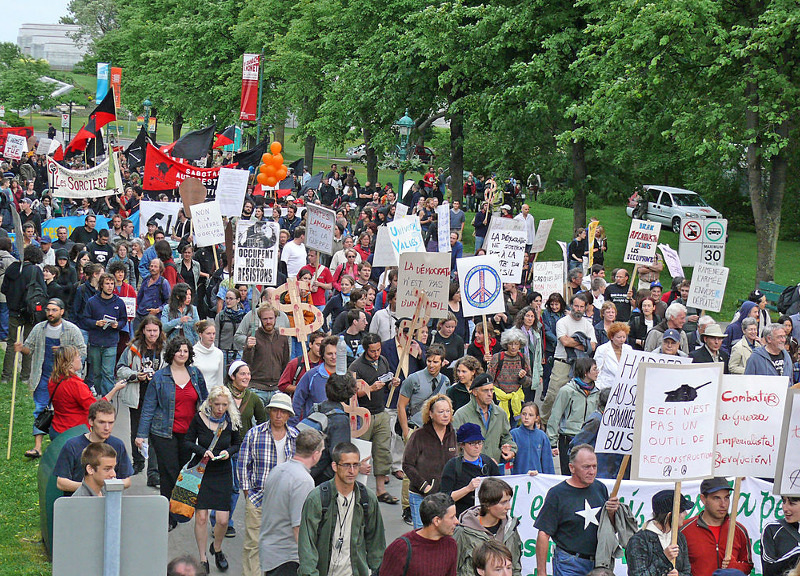 In the following open letter, SPQ-Libre, the Syndicalistes et Progressistes pour un Québec Libre, appeals to Bloc leader Duceppe to throw their votes in with those of the NDP and propose to the federal Liberals a common front to overthrow the government on its motion to extend the Afghan military intervention for a further two years.

At this point, it would appear that the vote on extending the Afghanistan intervention is not being treated as a confidence vote, so the fate of the government is not at stake – contrary to the assumption in the open letter. Also, the NDP appears to be equivocating yet again on its position on this issue; it is not clear that they are ready to break from the all-party support that the current Canadian mission in Afghanistan has.

SPQ-Libre is a ginger group formed in 2004 to mobilize support for the pro-sovereignty and procapitalist Bloc and Parti Québécois among trade union members and social movement activists. It arose out of the remnants of the Rassemblement pour une alternative politique (RAP). The RAP split in 2002 when a majority of its members decided to initiate the formation of a left-wing sovereigntist party, the Union des forces progressistes (UFP), together with the PDS (the remnants of the provincial NDP) and the Quebec Communist party.

The RAP minority opposed the formation of the UFP, saying it was dividing the sovereigntist vote and undermining the movement for Quebec’s independence. Pierre Dubuc, a RAP minority leader, was instrumental in promoting the formation of SPQ-Libre with former leaders of some Quebec unions.

However, although the PQ has recognized it as a “political club” within the party, SPQ-Libre has not won significant support within the party. Dubuc got only 1% of PQ members’ votes when he ran for party leader in 2005.

The PQ’s increasing shift to the right, and the Bloc Québécois support of the Harper government in Parliament, have clearly embarrassed SPQ-Libre. The vote on extending Canada’s military mission in Afghanistan brings these tensions to a head. The UFP, for its part, merged in February of this year with another formation, Option citoyenne, to form Québec solidaire (QS), a party that now boasts a membership of some 6,000. While not anticapitalist, QS defines itself as a left-wing pro-ecology, democratic, feminist, sovereigntist party that is part of the global justice movement. In its first electoral test, an April by-election in Montreal, the QS candidate polled 22% of the vote.

As a party fighting for Quebec independence, QS does not see a role for itself in federal politics. It has not issued any statement on the Harper government’s sudden motion to extend Canada’s intervention in Afghanistan. However, QS participates in the antiwar coalition Échec à la guerre. •

Dear friends of the Bloc Québécois,

SPQ-Libre has always thought the so-called “five priority objectives” of the Conservative government would quickly dissipate, yielding to Stephen Harper’s essential political program: the war in Afghanistan and soon, perhaps, in Iran alongside George W. Bush. However, we didn’t think he would prove us right so soon.

By prematurely putting a resolution before the House of Commons to extend by two years the Canadian military presence in Afghanistan, Mr. Harper is acting as if he were at the head of a majority government, anticipating that the Opposition will not dare at this point to plunge the country into an election.

Mr. Harper demonstrates a complete lack of political fair play, taking advantage of the fact that the Liberal party is immersed in a leadership race. But should we expect even a minimum of fair play from a man and a party that have no respect for the democratic institutions of their country, who boycott the media and underwrite the contempt and racism of the customs authorities when they body-searched the Secretary General of la Francophonie, Abdou Diouf [a former president of Senegal].

We understood and agreed that during the adoption of the budget the Bloc had no choice but to vote with the Harper government. Overthrowing the government on this issue would have led to an electoral disaster in Quebec. But this time the situation is different. More than 70% of the Quebec population is opposed to the war in Afghanistan.

If the Bloc gives its support to the Harper government, Jack Layton’s NDP, which has already announced its intention to vote against the resolution, will make a significant breakthrough in Quebec. Once the polls indicate the emigration of a substantial share of the Bloc’s vote to the NDP and the division of the opposition vote in Quebec, Stephen Harper will find the desired pretext for an immediate election call.

The Bloc must vote against the resolution on Afghanistan and we think it must go so far as to extend a hand to Denis Coderre, Stéphane Dion and other Liberal MPs from Quebec – and the rest of Canada – and propose that they join with us in defeating the government on this fundamental question.

You correctly state in every forum that the Bloc’s only program in Ottawa is to defend the interests of Quebec. On the question of war and peace – the most important one in politics – you are aware of the deep feeling of the people of Quebec, as it has been expressed historically during the Boer war and the two World Wars. The Québécois are implacably opposed to wars they consider imperialist. And they have understood that this war in Afghanistan is not a war of liberation but a war of aggression for the profit of the oil interests who are so prominent within the Bush administration and the Harper government.

When the war against Iraq began, the people of Quebec overcame all of their linguistic and ethnic divisions, going into the streets and expressing with one voice their opposition to the war. A similar movement is brewing in opposition to the war in Afghanistan and the Bloc must be that voice of pacifist Quebec in Ottawa. And if the Harper government is defeated, we undertake, all of us, to be present on the ground in the election campaign to drive the Conservatives out of Quebec for ever.