In response to criticism of the concessions made by the Canadian Auto Workers (CAW) at General Motors’s Oshawa facility this winter, the union has made four counter-arguments. First, no concessions were in fact made: the union won jobs through ‘smart bargaining’. Second, contradicting the first point, that concessions may have been made, but trading off past gains for new investment is only normal historical practice in the union. Third, going beyond the second point, concessions were made in the past even apart from new investments. Fourth, by-passing all of the above, the past is irrelevant because times are so different today: it is the new conditions that require greater accommodation to the companies. These arguments are important for their implications for the Canadian labour movement as a whole. They demand a response. 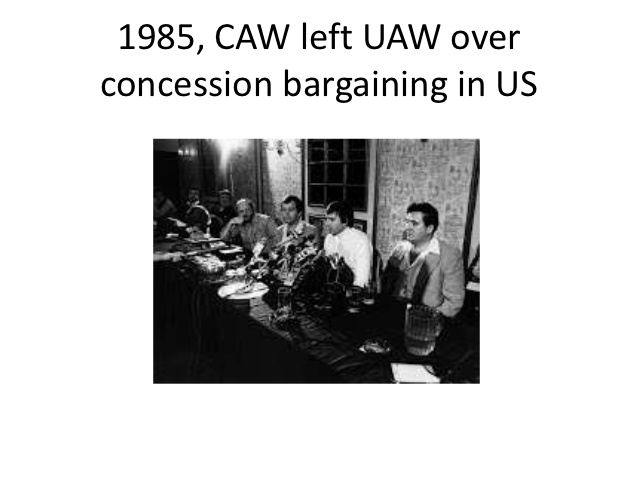 The first point has no credibility whatsoever. Workers in Oshawa know very well that they gave up things they previously had in spite of so signing a collective agreement with the company just in the previous fall. Calling defeats ‘victories’ does not magically make them so. The second point is simply dishonest. Workplace conditions do of course change alongside new investments in models and technology. But to label the outsourcing of janitorial jobs and the reduction of relief time as mere ‘changes’ trivializes their importance to the workers being outsourced, as well as the past struggles to resist on-going corporate demands for dumping unionized jobs. What happened in Oshawa can not be written off as an historical ‘norm.’

The third point that the union always made concessions is technically true in the sense that this is not the first time that workers have suffered losses. But it stunningly passes over the very point of pride that characterized the CAW’s leadership role since the end of the 1970’s: the refusal to open up collective agreements and surrender past gains without a fight! What made losses into ‘concessions’ was the lack of resistance, and it was the consciousness of the need to struggle that defined what has been the CAW – ‘fighting back makes a difference.’

For example, Canadian Chrysler workers did, when they were still bargaining within an international agreement with American workers, give up some of their cost-of-living (COLA) increases. Even though the Canadian vote was marginally opposed to the loss of some of the COLA, this was swamped by the overall Canada-US vote in favour. But the point is that soon after, the Canadians defied their American parent and went on a five week strike – even as Chrysler was in bankruptcy hearings – to successfully restore their COLA!1 Similarly, Canadian auto workers gave up some paid time off the job in the early 1980s. But this was part of the successful fight to hang on to the principle of regular wage gains. More important, the union recognized this as a loss. And after breaking away from the United Autoworkers (UAW), the new CAW union successfully made work time gains an issue in every round of bargaining through the 1980s and 1990s, eventually getting their work time – and then some – back.

The fourth point that ‘times have changed’ is, again, a truism in certain respects. No one denies how difficult and uncertain present conditions under neoliberalism are for working people. But to contrast the present with the past in order to justify actions taken today obscures how difficult the times also actually were then when different fightback strategies were taken -up. Such arguments sell short the workers who earlier risked resistance to corporate demands to the point of even daring to form their own union. In the early 1980s, Canadian unemployment rates were at double-digit levels and rising, while they are at 6.4% today; Canada was going through its worst economic crisis since the Great Depression with the Canadian economy in a more difficult position than any of the other developed countries; and predictions of the end of the Canadian auto industry were common. One especially prominent report (which followed upon other such reports) noted predictions of job losses “in the range of 30 and 50 percent from 1978 to the mid-1980s. This amounts to a loss of between 29,000 and 41,000 direct wage earning jobs. These forecasts are based on conservative assumptions” (Ross Perry, The Future of Canada’s Auto Industry, 1982).

Even if times have indeed changed, that still begs the question of why that should mean the union giving into the auto companies and making their arguments for them about the need for subsidies and the need for concessions. Strengthening the independent stance of the union and building the allies, policies, and internal structures that can challenge corporate power is always another available option for collective bargaining and political organizing. It is worth reminding ourselves that in that in the 1980s conditions in the US auto industry were much more threatening than they were even in the Canadian industry. Yet, the Canadian union never accepted – quite correctly as it turned out – arguments of the UAW leadership for, and justification of, concessions because ‘times have changed’. UAW head Doug Fraser, trying to convince the Canadian auto union at the time that the new times limited any alternatives, asserted that “if Bob White thinks he’s going to get a better deal out of those auto companies…he’s crazy…. [The Canadian members] may well get screwed in terms of benefits under the new regime…. The auto companies will now play some real hardball with the Canadians.”

In the current bargaining, the CAW has not given up wages and benefits with the ‘Big Three’ North American auto companies. But defining ‘concessions’ to exclude workplace rights is inexcusable: first, because of their importance to workers, and second, because of their importance to building the union itself. Contesting the workplace is most often where a sense of confidence in collective action is either sustained or lost. More dangerously, rationalizing concessions away by arguing they are ‘normal’ contributes to doing exactly what neoliberalism tries to do: push us to lower our expectations and come to believe that, even as productivity rises, concessions are inevitable and can’t be fought against. Rewriting history to normalize concessions weakens workers for the struggles ahead by robbing them of the lessons and inspirations of their actual history, including their potential strength, creativity, and courage. •