It has been 16 long years since Mike Harris cut welfare and froze disability. McGuinty’s Liberals have been in power for half that time and done nothing to deal with … END_OF_DOCUMENT_TOKEN_TO_BE_REPLACED

It has been 16 long years since Mike Harris cut welfare and froze disability. McGuinty’s Liberals have been in power for half that time and done nothing to deal with poverty. In fact people are worse off today. It would take a 55% increase to bring benefits to pre-Harris levels. If benefit levels were restored to the same level of spending power as they had in 1994, a single person on Ontario Works would now be receiving $904 a month instead of the miserable $593 now being issued.

Now as the economy continues to slump and the need is greater than ever, this government is destroying the vital Special Diet Allowance that has enabled people to survive. The new system they have proposed will provide benefits for fewer conditions and applicants will have to release medical information and face other intrusive measures designed to prevent access to the benefit. Within the Liberals’ own statement about this measure, they refer to the fact that ‘many will not be eligible,’ and this is a move to ‘respect taxpayers.’ The new Special Diet comes in to affect on April 1st, 2011 and all those who are not eligible under the new program will be cut off by July 31st. (See OCAP’s factsheet about the new Special Diet) 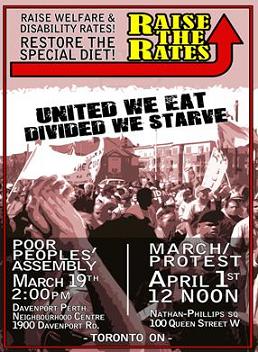 With no intention of dealing with the crisis of poverty they have created, the Liberals are setting up an 18 month long review of the welfare system to divert us from taking action to challenge them. We don’t need a review to tell us we’re hungry. What we need is decent income and a 55% increase in the rates now!

UNITED WE EAT, DIVIDED WE STARVE