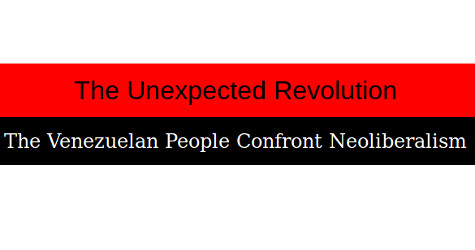 In Latin America, there have been many peoples and countries with an abundance of deep, radical political traditions, whose struggles regularly fill the headlines of international newspapers. The left from around the world often – in the past and even today – looks to these countries as models to follow and/or support. But there are also countries in Latin America without these radical political traditions. Countries like Venezuela used to be known for their vacation resorts, such as the Margarita Islands, or in derogatory ways as Venezuela Saudita (Saudi Venezuela); or for the handful of radical leftists that tried to organize an insurgent guerrilla movement in the mountains of Venezuela in the 1960s, although this was a marginal undertaking. The multiple attempts to economically develop Latin America in a more egalitarian or democratic direction have almost always failed in this region of the world because of foreign intervention, poorly committed leaderships, coup d’etats, or a combination of all three factors.

Carlos Torres has been an activist in the World Social Forum and a researcher at the Centre for Social Justice in Toronto. After years in exile from the Pinochet regime in Chile, he has returned to research, writing and political activism there.

Marta Harnecker (1937 - 2019) is originally from Chile, where she participated in the revolutionary process of 1970-1973. She has written extensively on the Cuban Revolution and on the nature of socialist democracy. She lived in Caracas and was a participant in the Venezuelan revolution. Her latest book is A World to Build: New Paths toward Twenty-First Century Socialism.