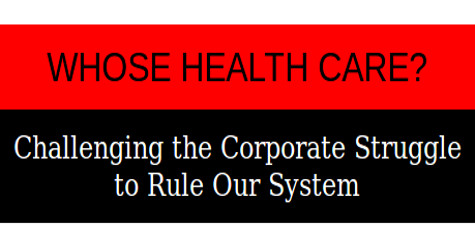 Challenging the Corporate Struggle to Rule Our System

Most Canadians reject a private health care system that is driven by the accumulation of profit, that limits people’s access to the size of their wallets and provides health in exchange for the risk of financial debt. Affordable public health care – for one’s own family and as a shared right with others – is something worth defending.

Defending public health care is not enough. It doesn’t prevent a slower ‘death by a thousand cuts.’ Indignant government campaign speeches against privatization only lead to more subtle forms of privatization – privatization by stealth. Even where privatizations are curbed, the rules under which hospitals are run are transformed so they reflect the thinking and practice of competitiveness and commercial values, not social values. Cutbacks may be checked today, but revived tomorrow after tax cuts or an economic downturn lead to budget deficits that ‘demand’ new restraints. Any problems in the health care system that do occur lead to public frustrations which are then politically manipulated to develop support for ‘repairs’ and ‘innovations’ (based on giving private corporations greater control over our health).