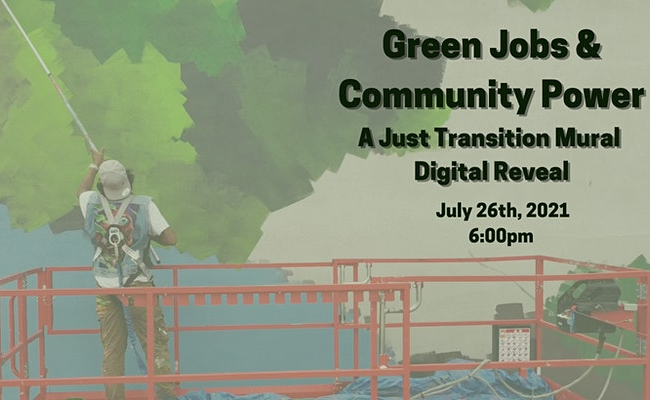 We will be broadcasting on Youtube Live at 6:00pm, the Just Transition Mural in Oshawa, Ontario. We are so excited to have worked with great partners, a talented artist, and bring impactful messaging to the citizens of Oshawa!

On behalf of our partners, we are so excited to continue making murals this year, the year of public art, by creating a Just Transition mural in the heart of Oshawa, Ontario.

Collaborating with Green Jobs Oshawa and the Canadian Union of Postal Workers, we designed a mural that represents what a ‘Just Transition’ could and will look like in the future. With the help of talented Bruno Smoky and Chad Tyson, we were able to create a visual vision of a Just Transition which has not been done before in Canada.

It’s time for Art & Artists to play the instrumental role that they always play during pivotal roles in history. It’s time for us to share with as many people as we can, the future that is possible.

The Canada we had must be eclipsed by the vision of the Canada we have all hoped for. It is only our bold collective action that will bring this vision to a reality.