Book Launch: Global Warming and the Sweetness of Life 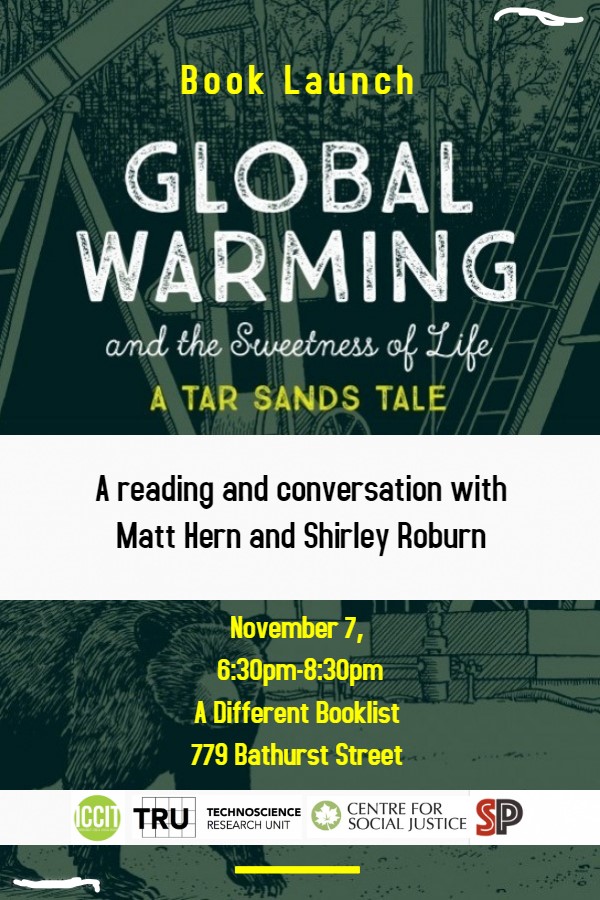 A book launch, reading and discussion, with Matt Hern and Shirley Roburn.

Matt Hern is a community organizer, independent scholar, writer and activist based in East Vancouver, British Columbia who is known for his work in radical urbanism, community development, ecology and alternative forms of education.

Shirley Roburn is assistant professor in the Department of Communication Studies at York University. She researches media strategies for environmental justice and social movement politics.

Co-hosted by the ICCIT, the Technoscience Research Unit, the Centre for Social Justice, and the Socialist Project

Confounded by global warming and in search of an affirmative politics that links ecology with social change, Matt Hern and Am Johal set off on a series of road trips to the tar sands of northern Alberta – perhaps the world’s largest industrial site, dedicated to the dirty work of extracting oil from Alberta’s vast reserves. Traveling from culturally liberal, self-consciously “green” Vancouver, and aware that our well-meaning performances of recycling and climate-justice marching are accompanied by constant driving, flying, heating, and fossil-fuel consumption, Hern and Johal want to talk to people whose lives and fortunes depend on or are imperiled by extraction. They are seeking new definitions of ecology built on a renovated politics of land. Traveling with them is their friend Joe Sacco—infamous journalist and cartoonist, teller of complex stories from Gaza to Paris – who contributes illustrations and insights and a chapter-length comic about the contradictions of life in an oil town. The epic scale of the ecological horror is captured through an series of stunning color photos by award-winning aerial photographer Louis Helbig. Seamlessly combining travelogue, sophisticated political analysis, and ecological theory, speaking both to local residents and to leading scholars, the authors propose a new understanding of ecology that links the domination of the other-than-human world to the domination of humans by humans. They argue that any definition of ecology has to start with decolonization and that confronting global warming requires a politics that speaks to a different way of being in the world—a reconstituted understanding of the sweetness of life.